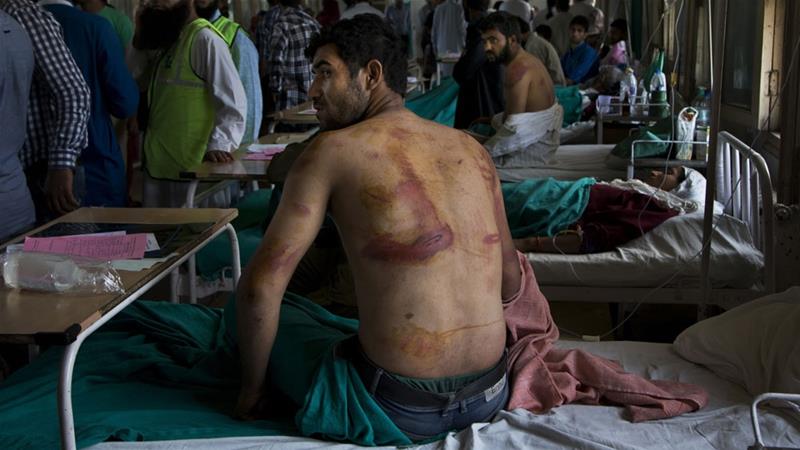 Other torture methods included electrocution, hanging from a ceiling, dunking detainees’ head in water (which is sometimes mixed with chili powder), said the report by Association of Parents of Disappeared Persons (APDP) and Jammu and Kashmir Coalition of Civil Society (JKCCS).

During the torture detainees were stripped naked, beaten with wooden sticks, and bodies were burned with iron rods, heaters or cigarette butts, it said.

“Muzaffer Ahmed Mirza from Tral and Manzoor Ahmad Naikoo were subjected to insertion of a rod through their rectum. It caused multiple ruptures to their internal organs,” reads one of the 432 testimonies documented in the report.

“While Mirza died after a few days in the hospital of lung rupture, Naikoo had to undergo five surgeries to finally heal the wounds he received due to this torture.

“Apart from insertion, a cloth was wrapped around Naikoo’s penis and set on fire.”

Titled, “Torture – Indian state’s instrument of control in Indian-state of Jammu and Kashmir”, it said that more than 70 percent of the torture victims were civilians.

India has stationed more than half a million security forces in the disputed Muslim-majority region to quash an armed rebellion against its rule. Indian forces have faced criticism for excessive use of force, with the UN human rights body last year calling for an international probe into rights violations.

The UN Human Rights Chief had also called for establishing a Commission of Inquiry (COI) to conduct a comprehensive independent international investigation into allegations of human rights violations in Kashmir.

A COI is one of the UN’s highest-level probes, generally reserved for major crises like the conflict in Syria.

Rights bodies have called for repeal of the Armed Forces Special Powers Act (AFSPA), a law that gives forces immunity from prosecution.

The report, which documents cases since the start of the armed rebellion in 1990s, reveals many detainees were put under behavioural coercion where they were forced into activities that were against their “religious beliefs” like rubbing piglets on their bodies or forcing them to consume alcohol.

In some cases, it said, rats were put inside victims’ trousers after soaking sugar water on their legs.

The report reveals most of the civilian victims were usually reluctant to report the atrocities due to the fear of reprisals at the hands of security forces.

“Victims have been randomly picked up, tortured and never even told what they were tortured for,” it said.

In a prologue of the report, former UN Special Rapporteur on Torture, Juan E Mendez, said the report “will be enormously helpful in drawing attention in the international community to the need to express concern about India’s human rights record”.

Parvez Imroz, the human rights lawyer and the president of JKCCS, told Al Jazeera that “torture is one of the massive human rights violations going on unabated in the region from last many decades”.

“This report is an effort to break the silence around this heinous crime,” he said.

“There are no such cases, if there have been any allegations, there are magisterial inquiries and other investigations. If they have any such case, they must tell us and we would respond to them”.

Vijay Kumar, the advisor to the governor of the restive region, said that he would comment after reading the report.

The report said that more than half of the 432 victims suffered some form of health complications after being tortured.

“In the 432 cases studied for this report, 24 are women. Out of these 12 had been raped by Indian armed personnel,” the report says.

The torture survivors have battled with psychological issues long after their physical wounds were healed.

“Of the 432 victims, 44 suffered from some form of psychological difficulty after being subjected to torture,” it said.

A study published in 2015 by Doctors Without Borders (known by its French initials MSF) said that 19 percent of the population in the region suffered from Post-Traumatic Stress Disorder (PTSD).

Although India has been a signatory to the United Nations Convention against Torture (UNCAT) since 1997, it has not ratified the treaty to date. In all three UPRs conducted by the UNHRC in 2008, 2012 and 2017, it was recommended that India ratify the convention.

In 2010, Prevention of Torture Bill was introduced in the Indian parliament but was not passed and it lapsed in 2014.

Khurram Parvez, who is also one of the researchers for the report said that “the report is a challenge to state-imposed erasure of history and memory”.