Last blast of summer? Britain enjoys a break from autumn as temperatures hit 77F with dry conditions expected to continue into next week

As the nights draw in, no one can deny that autumn is in the air. But for those not ready to embrace the new season, here’s one last excuse to keep out the barbecue.

Temperatures are expected to rise as high as 25C (77F) this weekend as an Indian summer takes hold.

Thanks to a build up of high pressure, dry conditions will be widespread with particularly high temperatures predicted for the South East. 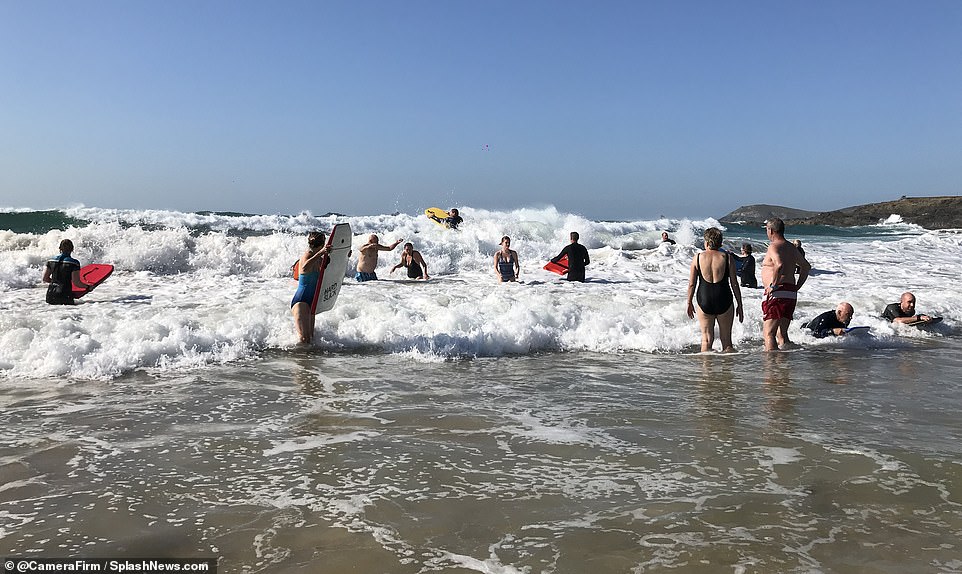 People enjoyed one of the last flourishes of summer in Treyarnon Bay, near Padstow, Cornwall 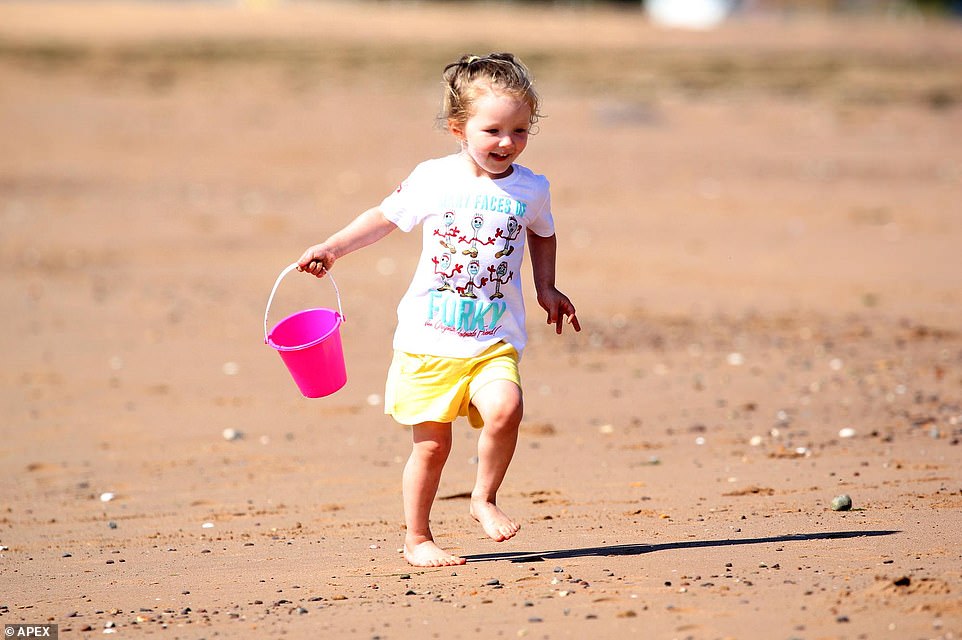 Weather forecasters predict dry conditions will be widespread with particularly high temperatures predicted for the South East as families flocked to Exmouth, Devon 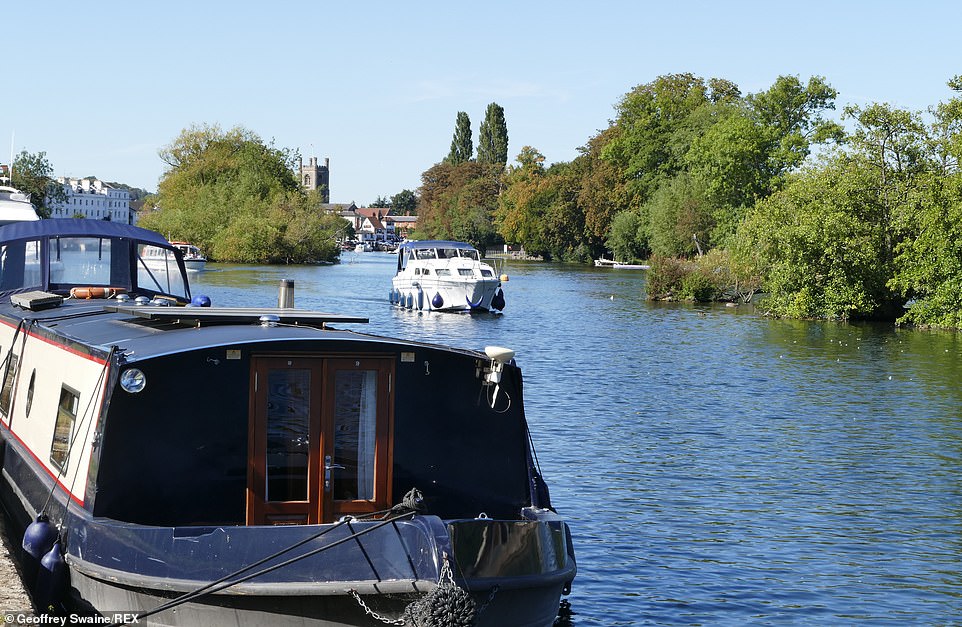 Many people were not ready to embrace the new season as they enjoyed the sunshine in Henley on Thames, Oxfordshire 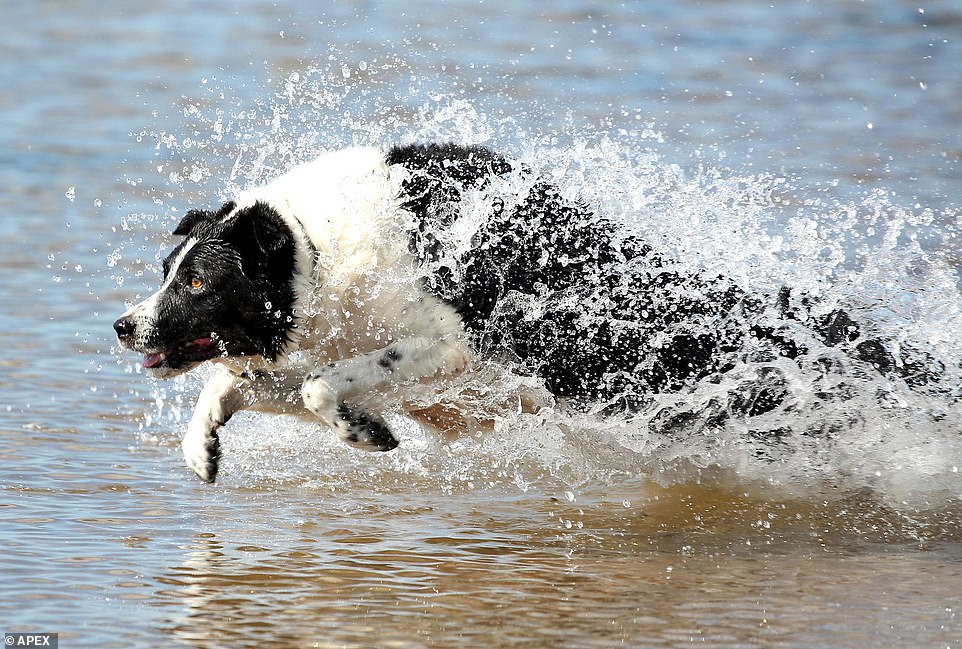 It was an good day for excited dogs too as they made the most of the warm weather and cooled off in the sea at Exmouth, Devon

While the mercury is expected to rise to well over 20C today, forecasters have said it could get as hot as 25C in London by tomorrow.

The north of England will see more cloud and lower temperatures – although it could still reach 21C (70F) today and 17C (63F) tomorrow.

Due to the lack of cloud in the South, the evenings are expected to be cooler, with overnight temperatures of around 11C. 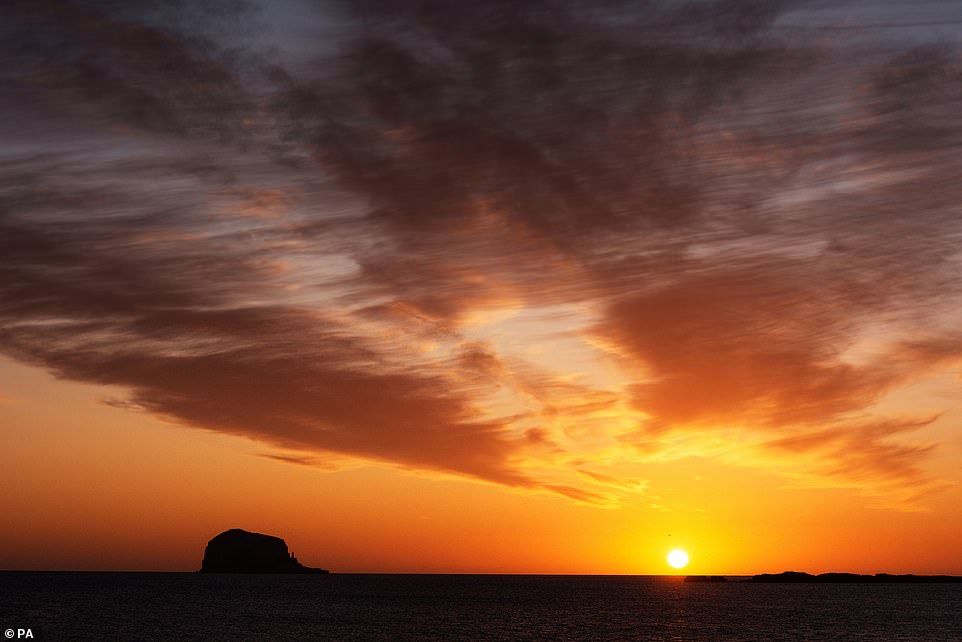 Temperatures are expected to soar over the weekend to 77F (25C) as Britain enjoys an Indian Summer (pictured: The sunrise over Bass Rock from North Berwick, Scotland) 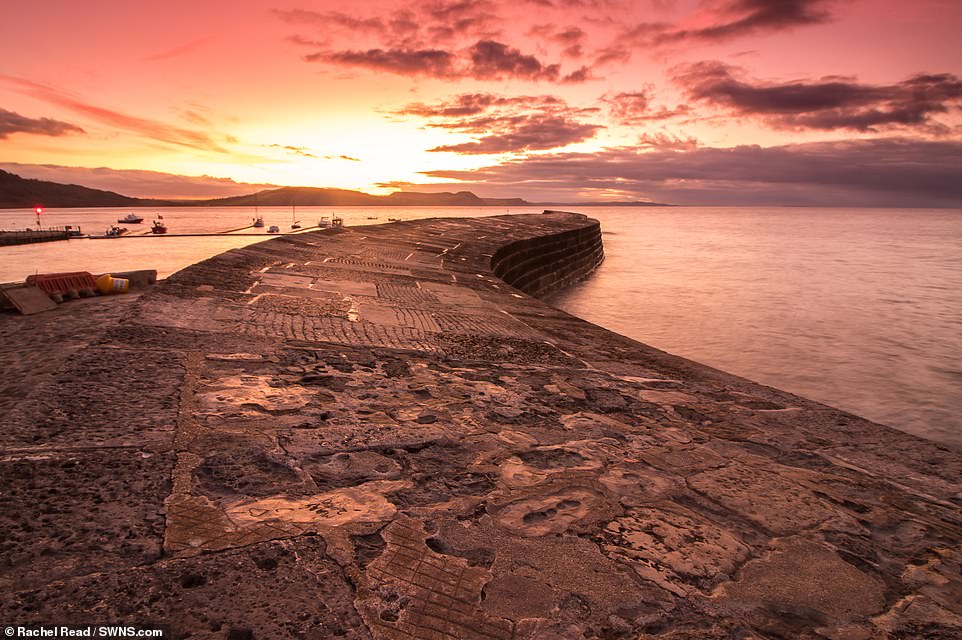 Temperatures were predicted to be around 70F today, rising to a high of 77F on Sunday (pictured: The sun rises over the Cobb in Lyme Regis, Dorset) 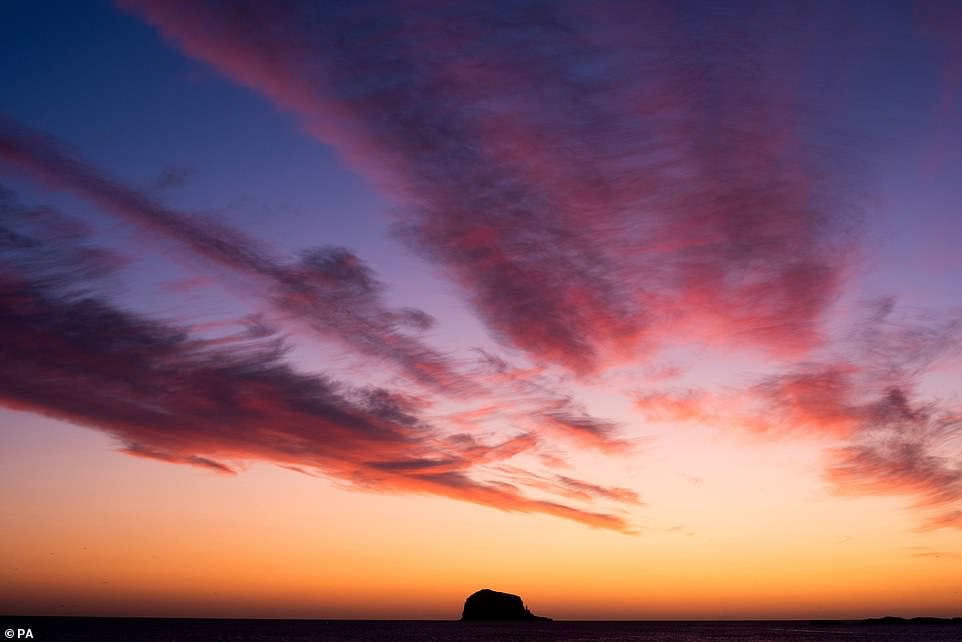 Bonnie Diamond, from the Met Office, said: ‘We are going to see some high pressure across the south of the UK, but with a bit of a different picture in the north west of the country.

‘This is due to a low pressure front from Iceland and windier conditions in the North West. But otherwise we are looking at a dry day on Saturday [today] across England and Wales with highs of around 22C to 23C.

‘By Sunday any weather which has brought rain to Scotland will be slipping south towards England but as it meets the high pressure it will bring cloud to the north of the country.

‘Further south, it will be another warm and sunny day. In the South West and South East temperatures could get up to 25C and the warmest weather of the weekend.’ 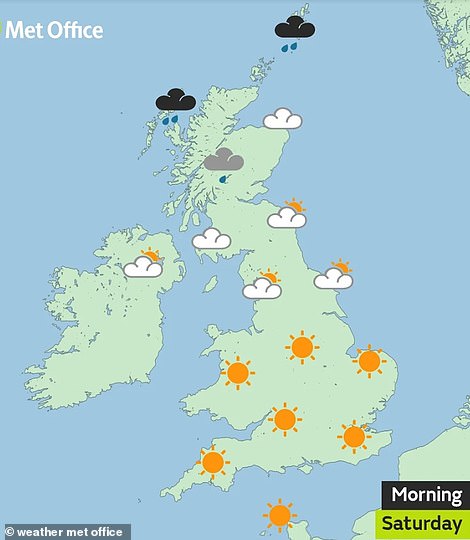 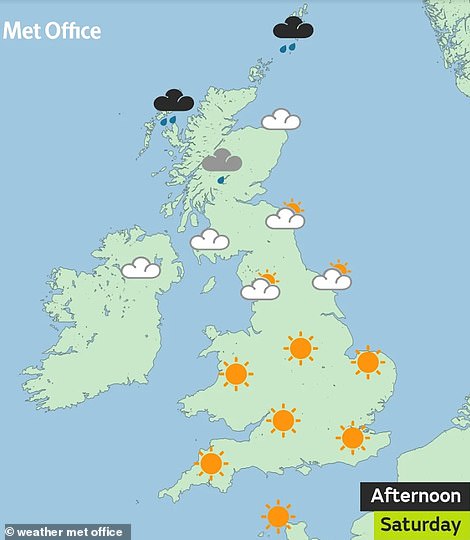 But it is not all good news.

The north west of Scotland could be hit with rain and severe gales of up to 60mph and the forecaster said wind in Scotland could cause localised disruption to transport, particularly for ferries.

On Sunday, the rain in Scotland is expected to move southwards across the rest of the country and then into northern England by the end of the day.

Average high temperatures over the last 30 years for September are 20C, much lower than what forecasters have predicted. But the unseasonably warm weather is set to be short-lived, even if it remains dry and bright. 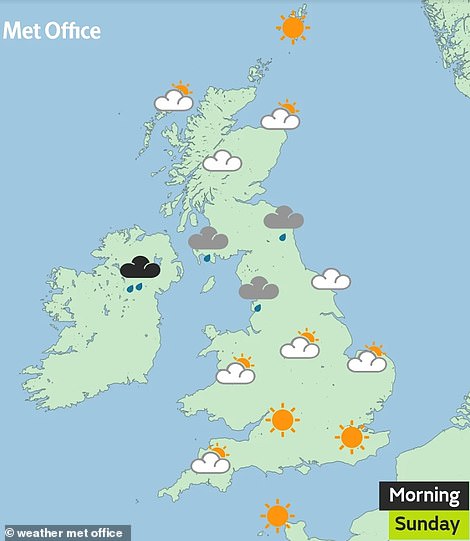 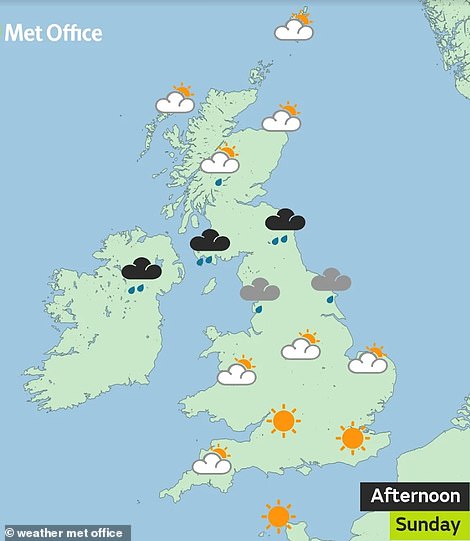 By Monday, the temperature could drop by 5C, as low pressure and air from Iceland drift southwards across the UK.

Miss Diamond added: ‘By Monday we will get some misty conditions and drizzle in the morning.

‘Further north we have cooler polar air from the cold front coming in but high pressure still around means it will be dry for most of the day.

‘High pressure and dry conditions should stick around for the first half of next week too.

‘Rural overnight temperatures could be as low as five or six degrees by Monday as the cold front comes in and a lack of cloud cover means colder conditions.

‘While the high pressure next week means dry weather will stick around it may not mean sun – we could see light winds and cloud.’ 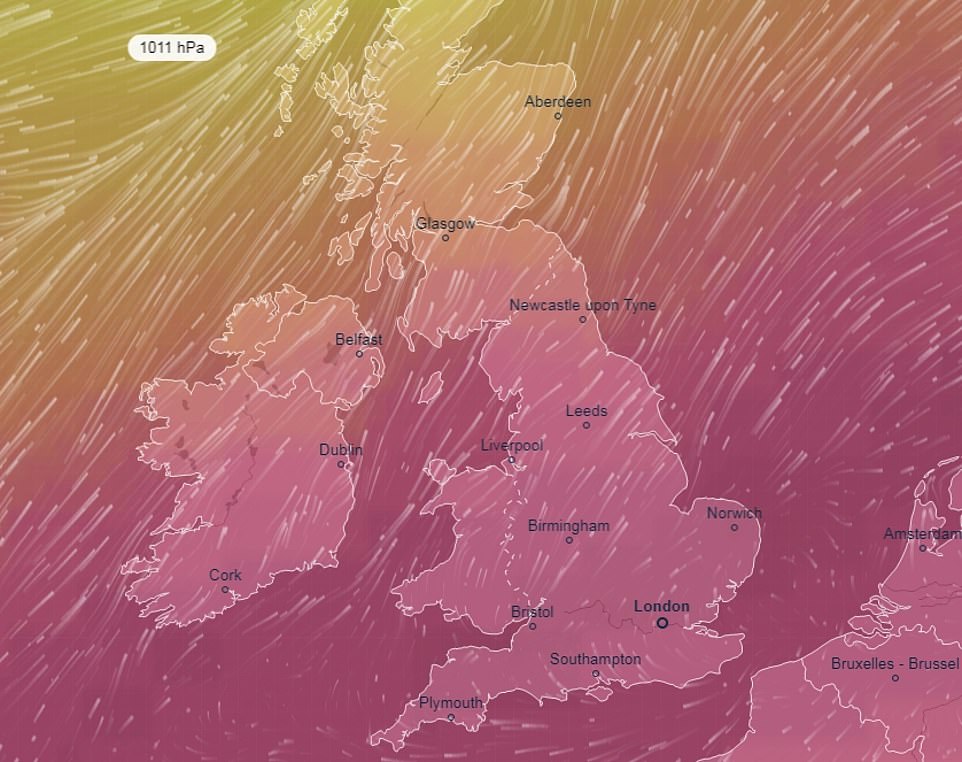 It will be dry and sunny in England, Wales and southern Scotland in the morning, some of which will be hazy in the north (pictured: Map showing high pressure at 1pm on Saturday) 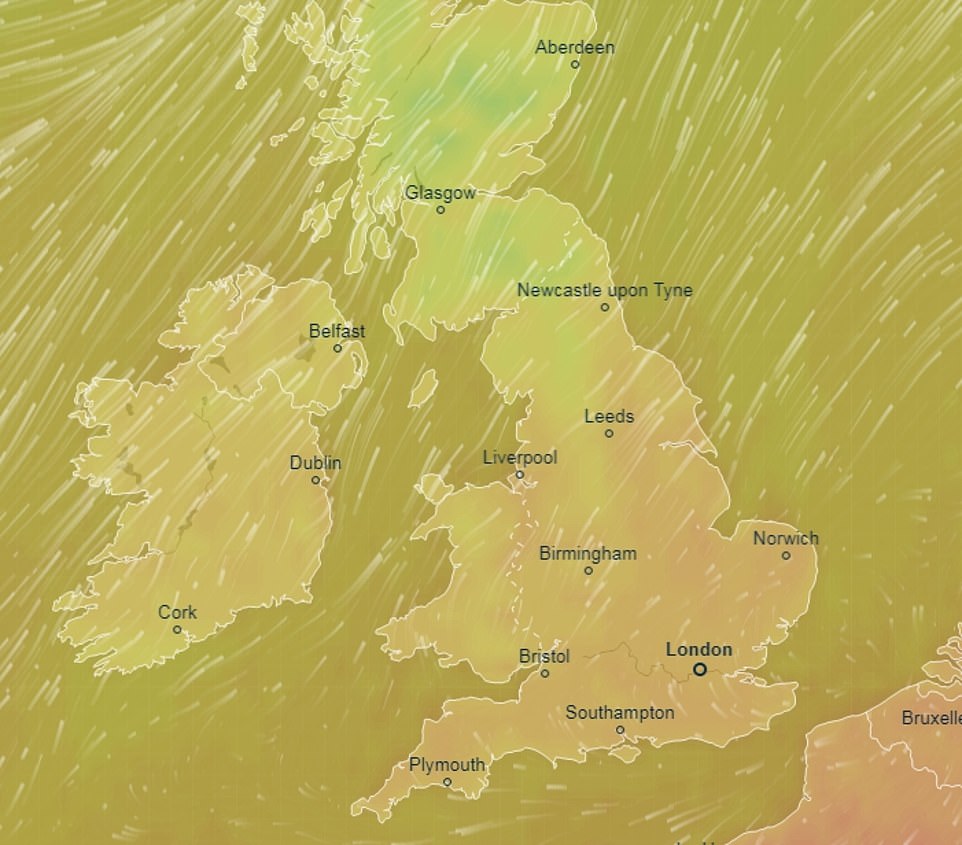 Northern Ireland and Scotland are expected to be cloudy with rain, heavy at times, which will sink southwards to affect all of Scotland and Northern Ireland (pictured: Map showing temperatures at 1pm pm on Saturday)