Calm AFTER the storm: UK will enjoy mild 60F highs today after battering from Storm Barbara… with rain to hit isolated areas in south and north of England during unsettled week again

Britain is set to enjoy 60F highs today with bursts of rain expected across the south and north of England after Storm Barbara battered parts of the UK yesterday with 65mph gales and flash floods.

A fortnight’s worth of rain fell in three hours on Wednesday as the Met Office issued yellow weather warnings for downpours across the south coast, the Midlands, London and East Anglia.

Further warnings were issued for heavy rain in Aberdeen, Aberdeenshire, Angus, and Perth and Kinross in Scotland until 11am today, when the downpours gave way to drier and brighter conditions across much of Britain.

Strong winds and heavy rain caused significant travel disruption amid Storm Barbara yesterday, with at least two crashes on the M5 and the A303 closed in both directions in Wiltshire.

There were also flood alerts in place for parts of Leicestershire and on the Cornish coast, with gusts of 45mph to 55mph recorded inland and 65mph near the coast elsewhere as the wind whipped in through the English Channel.

Met Office forecaster Craig Snell said Storm Barbara, which battered Spain and Portugal earlier in the week, was ‘moving north east – we know as we got a glancing blow of it – and it’s weakening as it does so’.

He added that today ‘thankfully will be drier and brighter but there will be short, sharp showers around the South East and London. North of Manchester, it will be cloudy with outbreaks of rain.’ 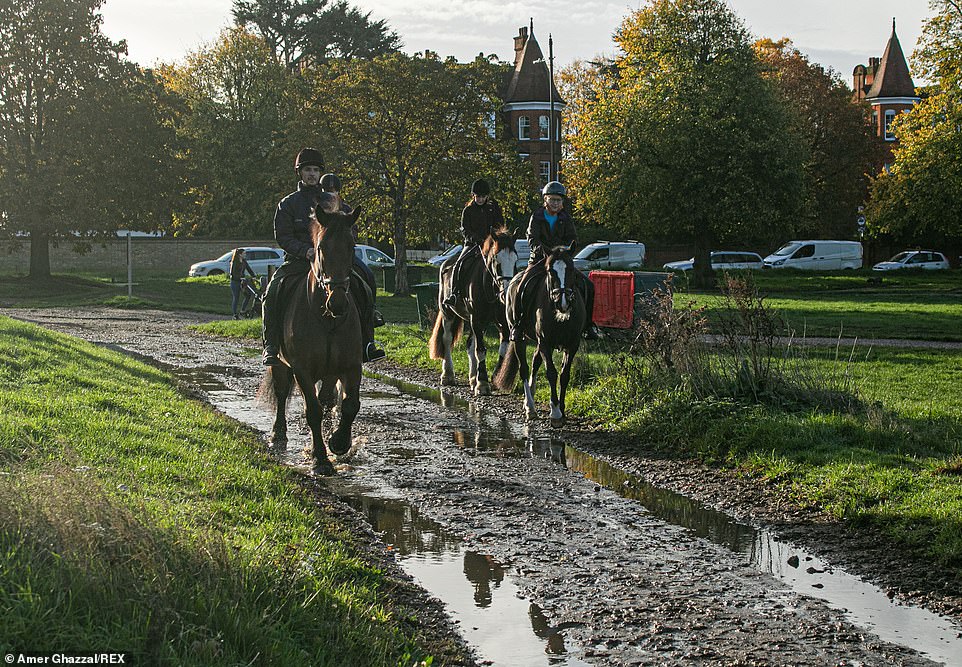 Britain is set to enjoy 60F highs today with bursts of rain expected across the south and north of England. Pictured: People ride horses on Wimbledon Common today 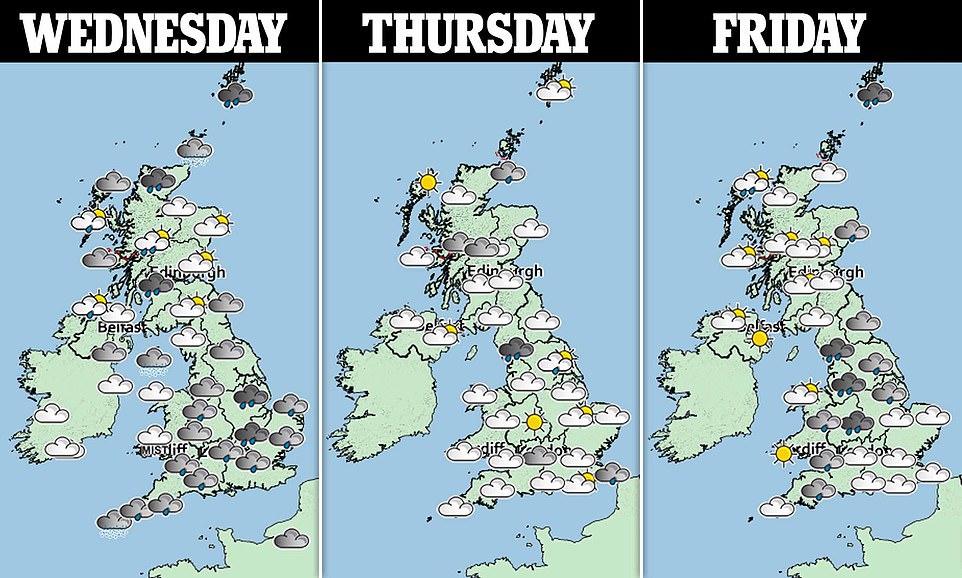 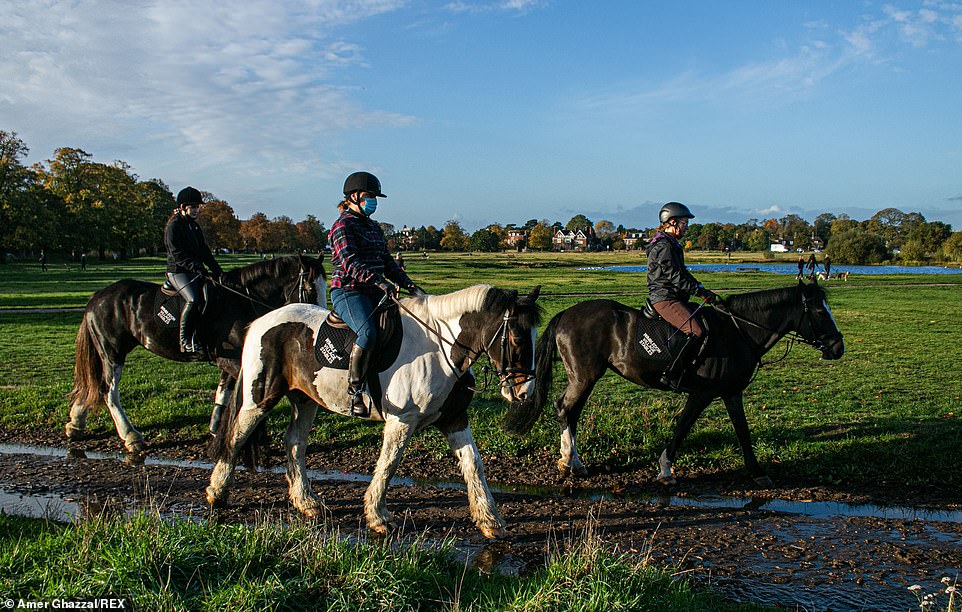 A fortnight’s worth of rain fell in three hours on Wednesday as the Met Office issued yellow weather warnings for downpours across the south coast, the Midlands, London and East Anglia. Pictured: Wimbledon Common today 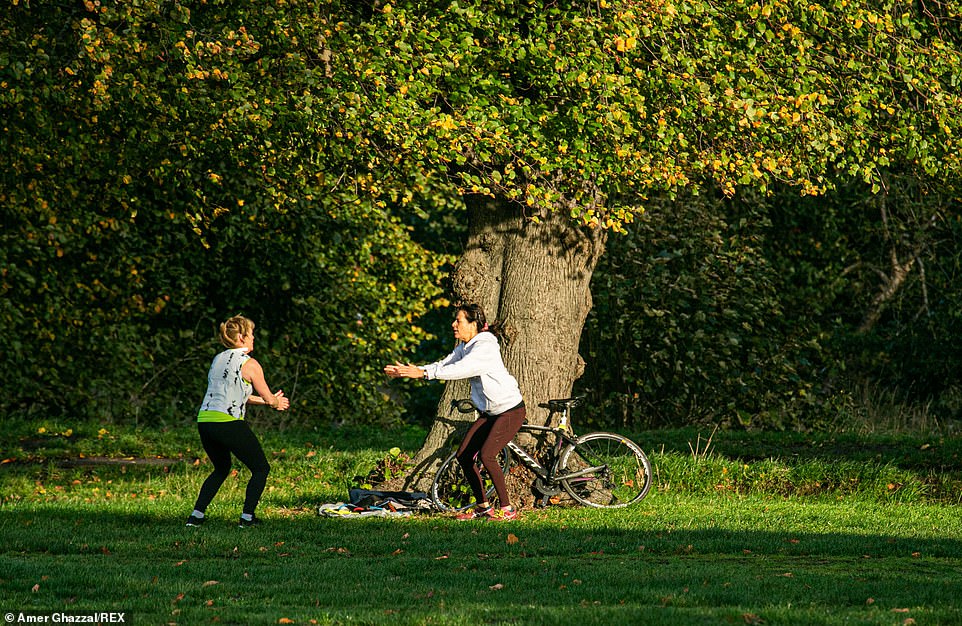 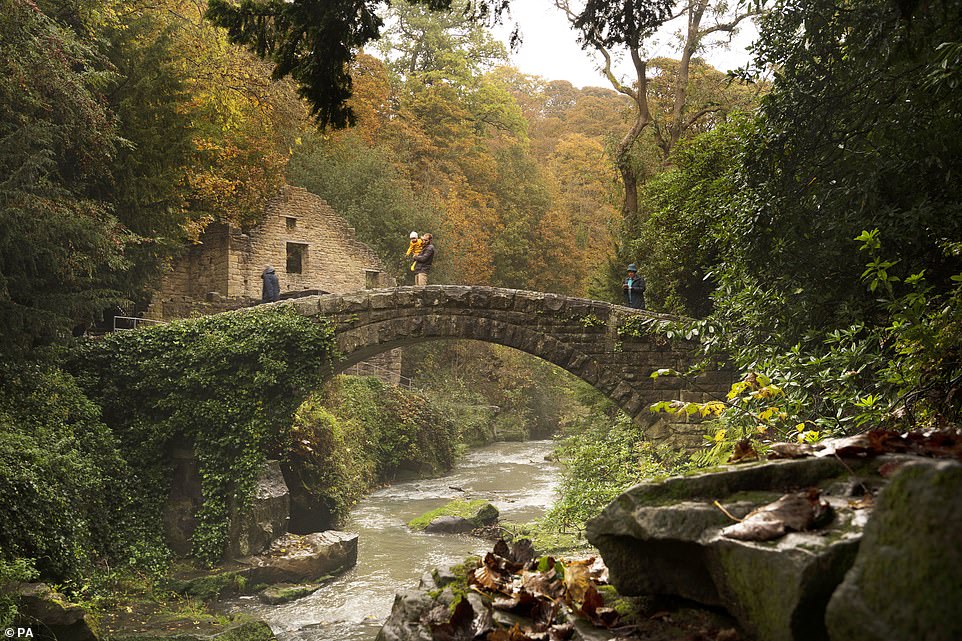 However, Britain’s drier conditions and highs of 61F (16C) will be short lived, with more wet and windy weather expected to hit the nation over the weekend.

Met Office meteorologist Oli Claydon added: ‘The wind and rain clears off into the North Sea and after that we’re left with a continued spell of unsettled conditions across the UK through the week.’

There may also be ‘periods of slightly more settled conditions’ and the occasional sunny spell – but things will remain ‘generally broadly unsettled’ through the weekend.

Overnight today will be dry for much of England, Wales and eastern Scotland. However, more widespread rain and strong winds could appear in western parts of Britain.

On Friday, downpours and strong gusts will again appear in the east, with showers following into western parts of the UK. Heavy rain is also expected in the northwest. 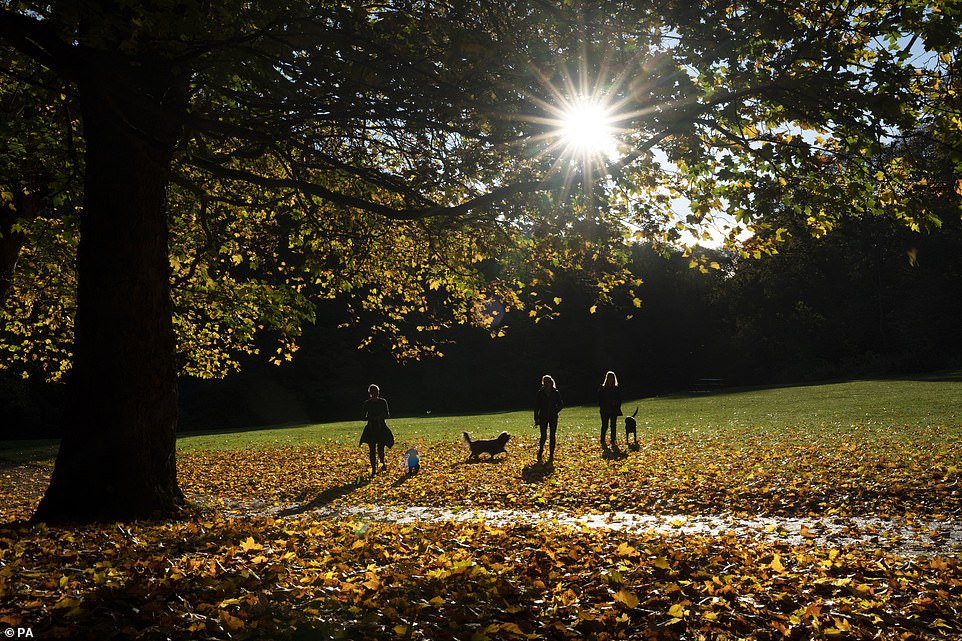 Pictured: A group of people walk their dogs past trees in autumn colour in Jesmond Dene in Newcastle this morning 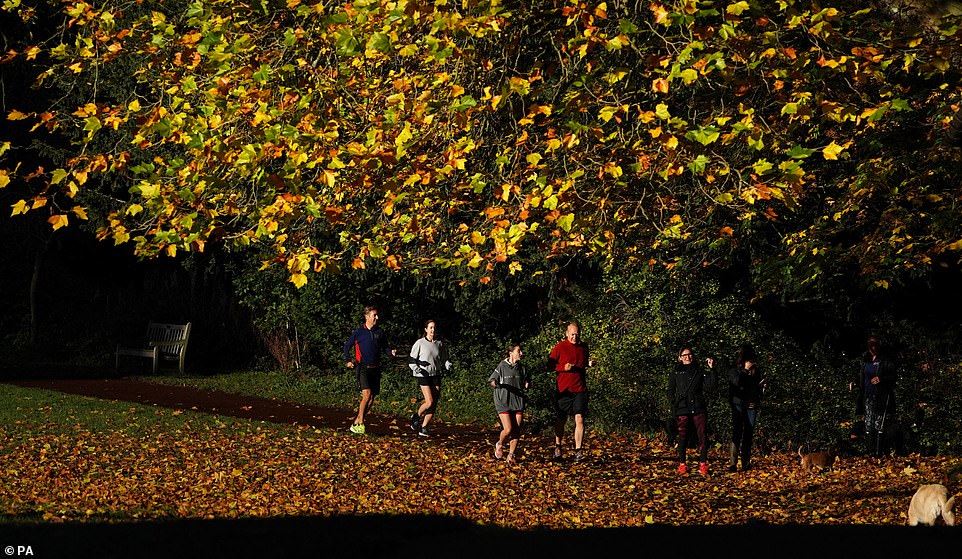 Strong winds and heavy rain caused significant travel disruption amid Storm Barbara yesterday, with at least two crashes on the M5 and the A303 closed in both directions in Wiltshire. Pictured: Jesmond Dene, Newcastle today 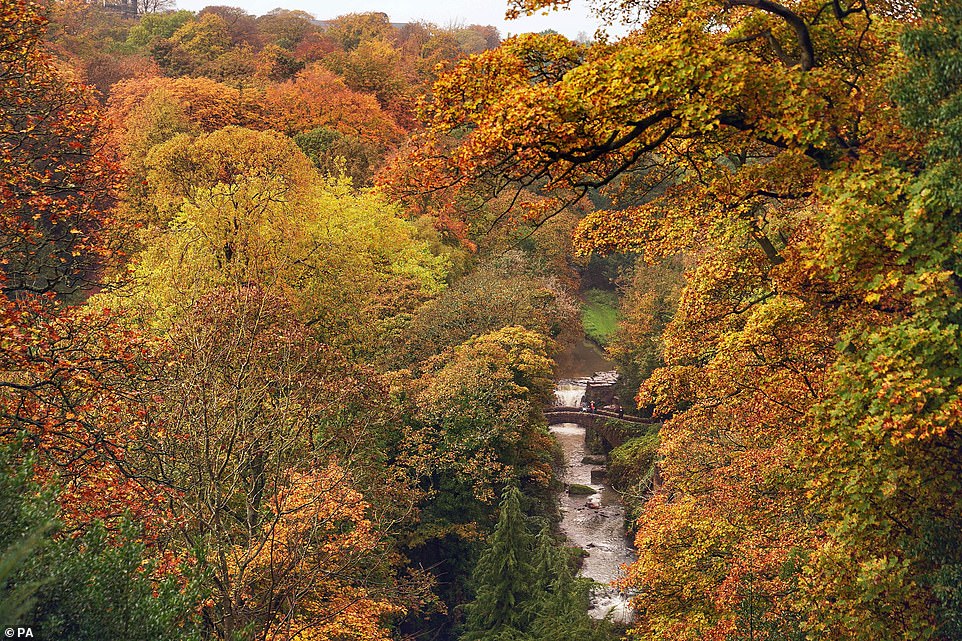 Britain’s drier conditions and highs of 61F (16C) in the South today will be short lived, with more wet and windy weather expected to hit the nation over the weekend. Pictured: Jesmond Dene 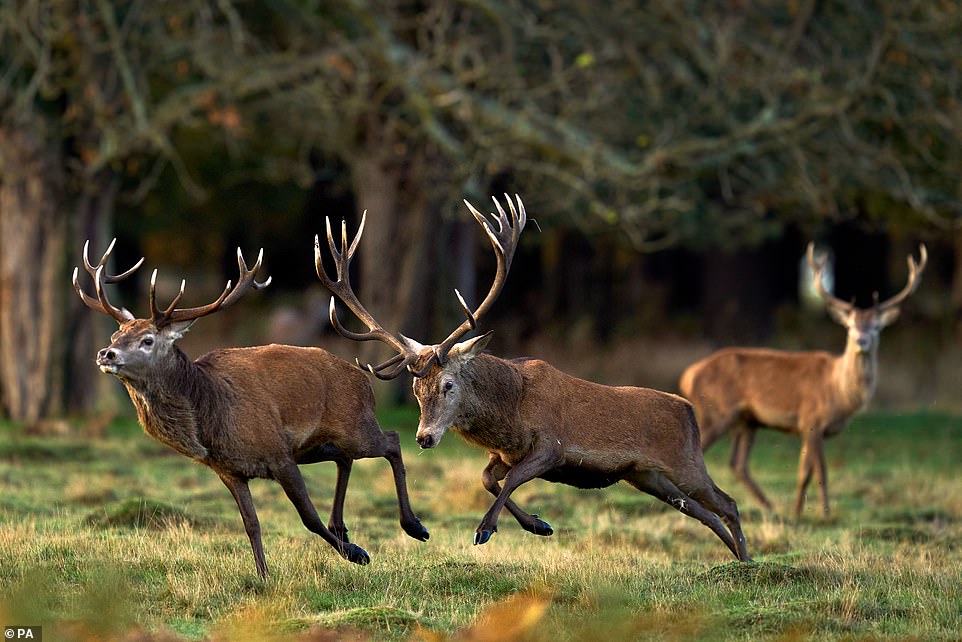 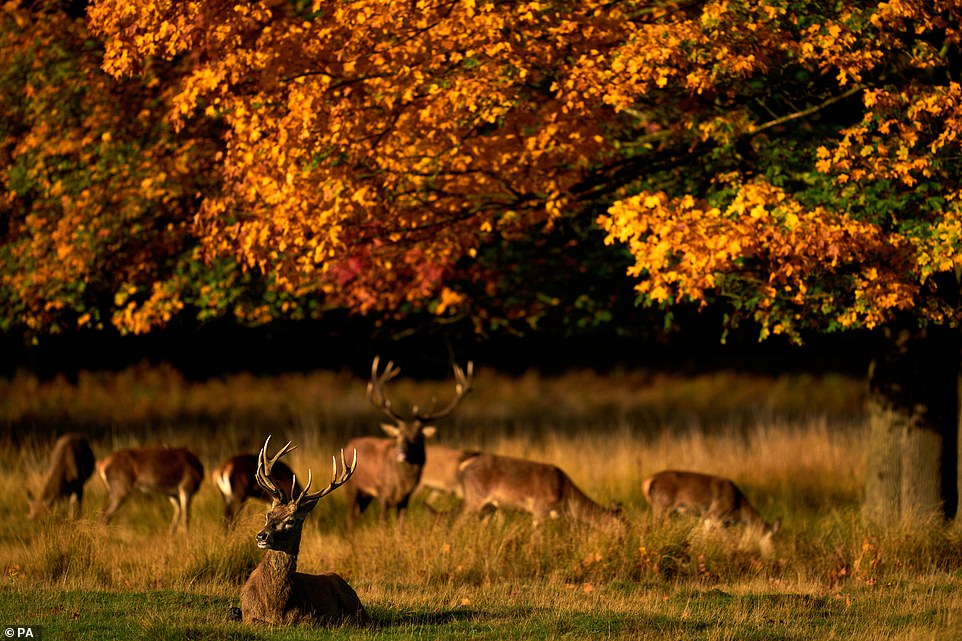 The rest of the week will see mild temperatures of 53 to 55F (12 to 13C) in the North – with the South a touch warmer. Pictured: Richmond Park

Residents were rescued from flooded properties and motorists from stranded cars after torrential downpours battered the north east amid Storm Barbara yesterday.

The Scottish Fire and Rescue Service (SFRS) said it was called to reports of flooding in Ellon, Aberdeenshire.

Several appliances attended the scene and residents were rescued from six properties.

An SFRS spokesman said: ‘We were alerted at 4.53am on Thursday October 22 to reports of flooding affecting a number of properties in and around Bruce Crescent and Provost Davidson Drive in Ellon, Aberdeenshire.

‘Operations control mobilised two fire appliances and two specialist water rescue units and firefighters worked to assist several people to places of safety from around six houses which had been affected by the flood waters. 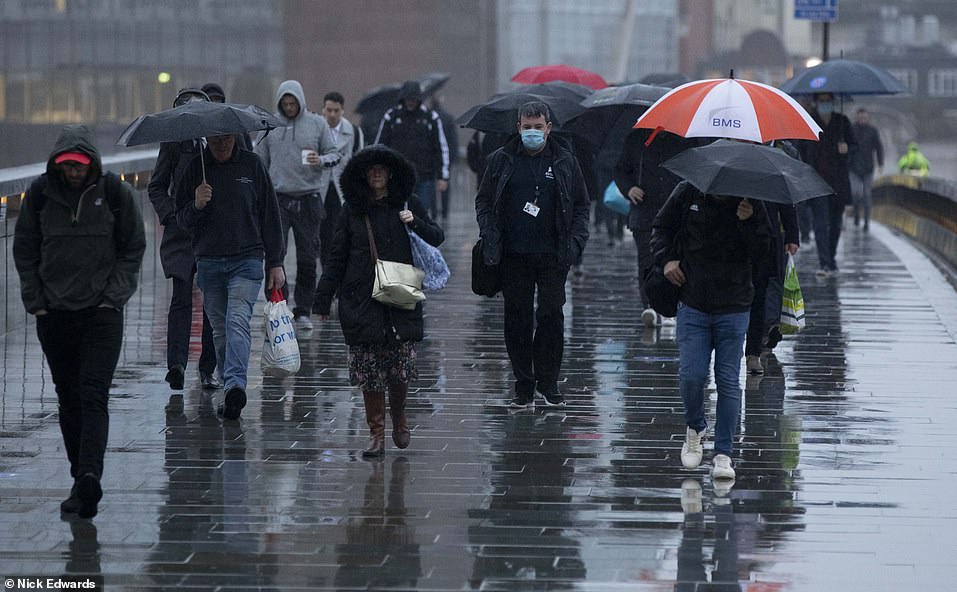 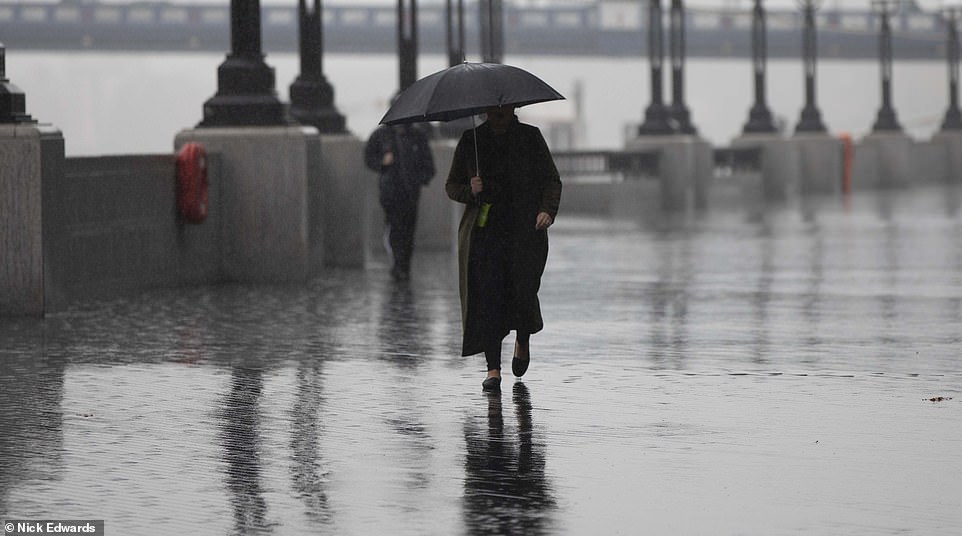 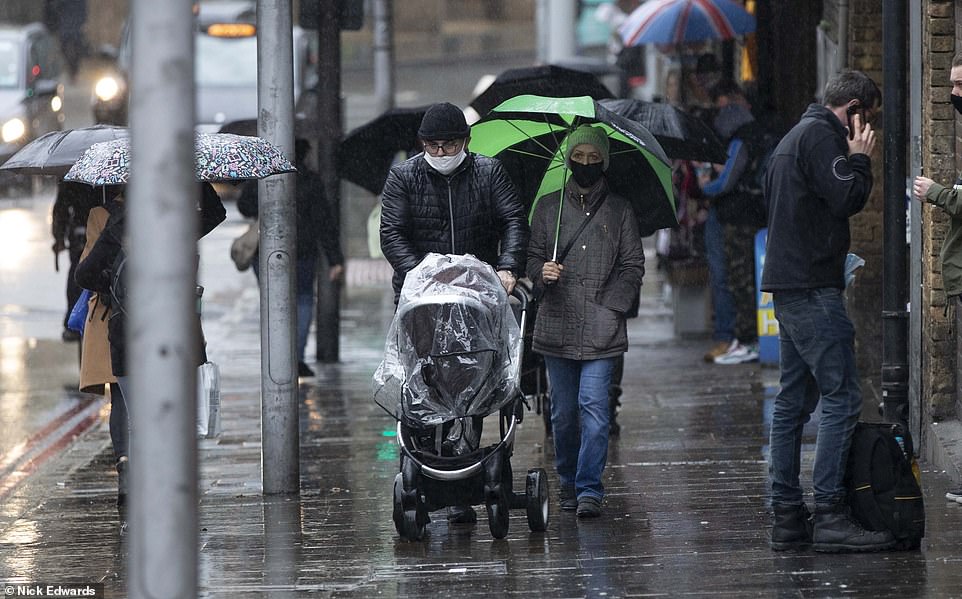 Yellow weather warnings were issued by the Met Office run until 5pm on Wednesday. Pictured are people walking near London Bridge 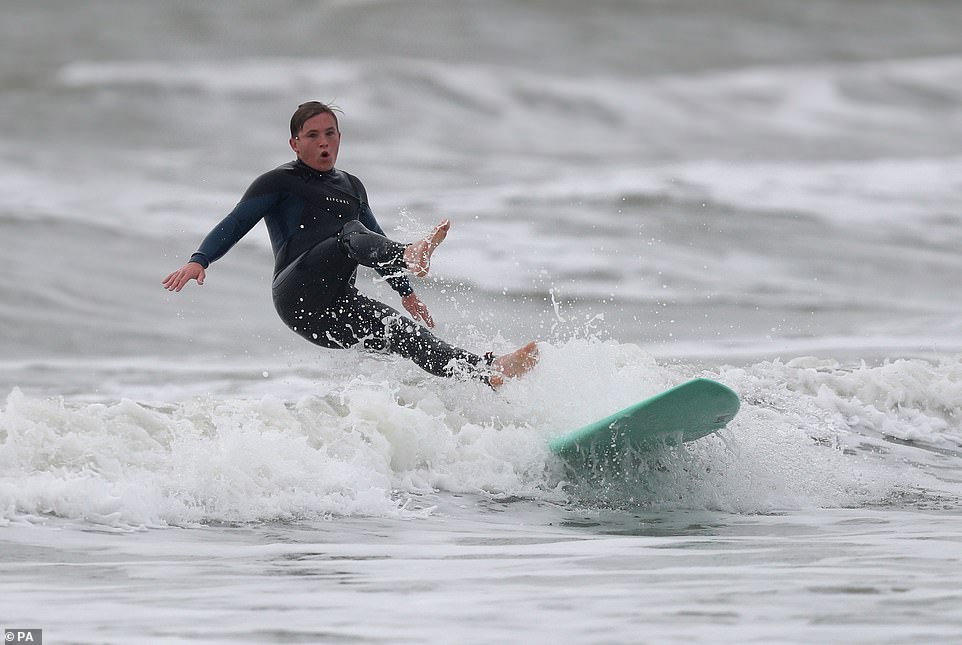 A surfer comes off his board while riding the waves at Bracklesham Bay, a popular surfing spot on the West Sussex coast 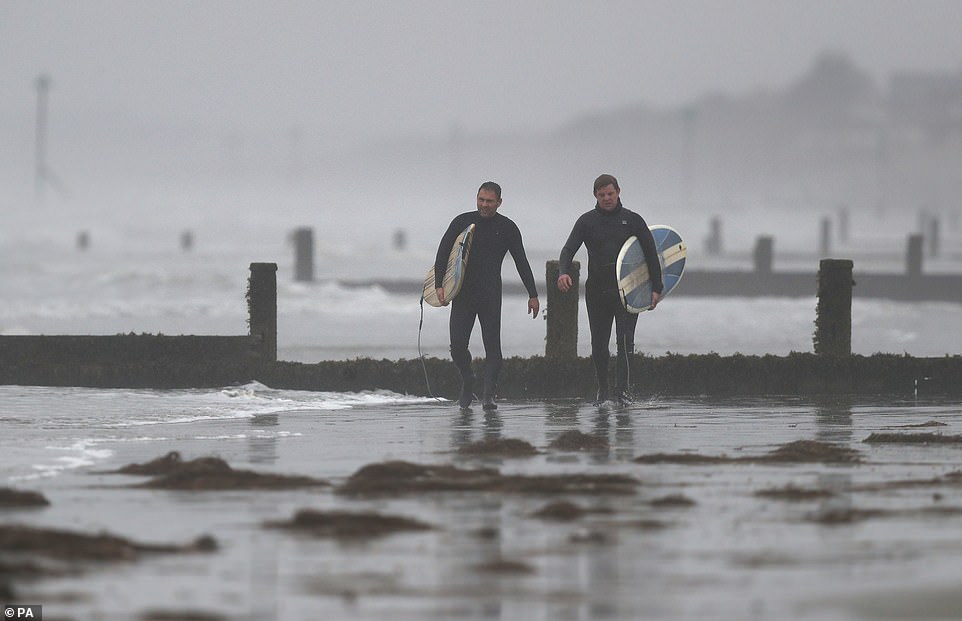 ‘Crews remain in attendance as they work to make the area safe and assist with the pumping of water from affected homes.’

In Angus, the A92 was closed after three cars became stuck in flood water between Arbroath and Montrose at around 4.10am.

Last week, it emerged that Britain endured its wettest day on record earlier this month – with enough rainfall to fill Loch Ness. 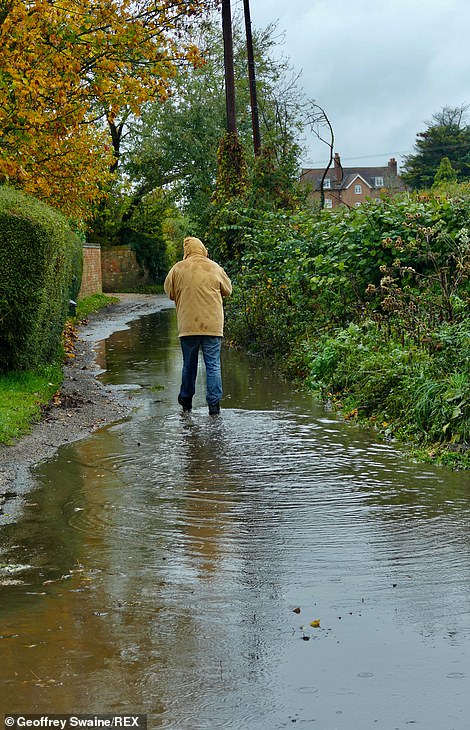 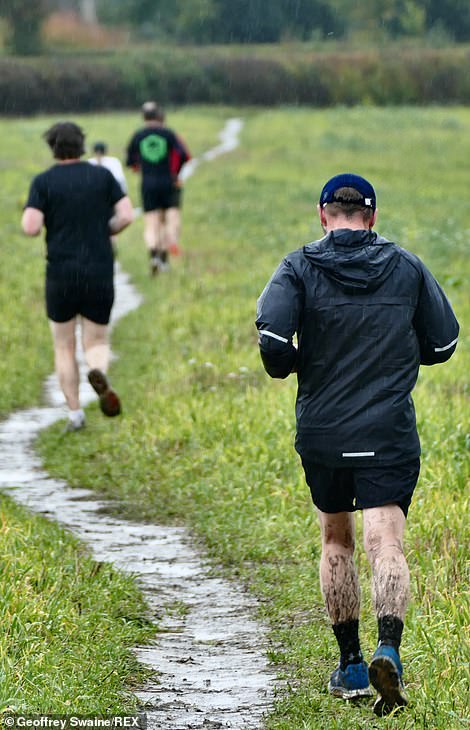 A walker wades through a large puddle in Dunsden, Oxfordshire (left) and a group of runners cross a muddy field 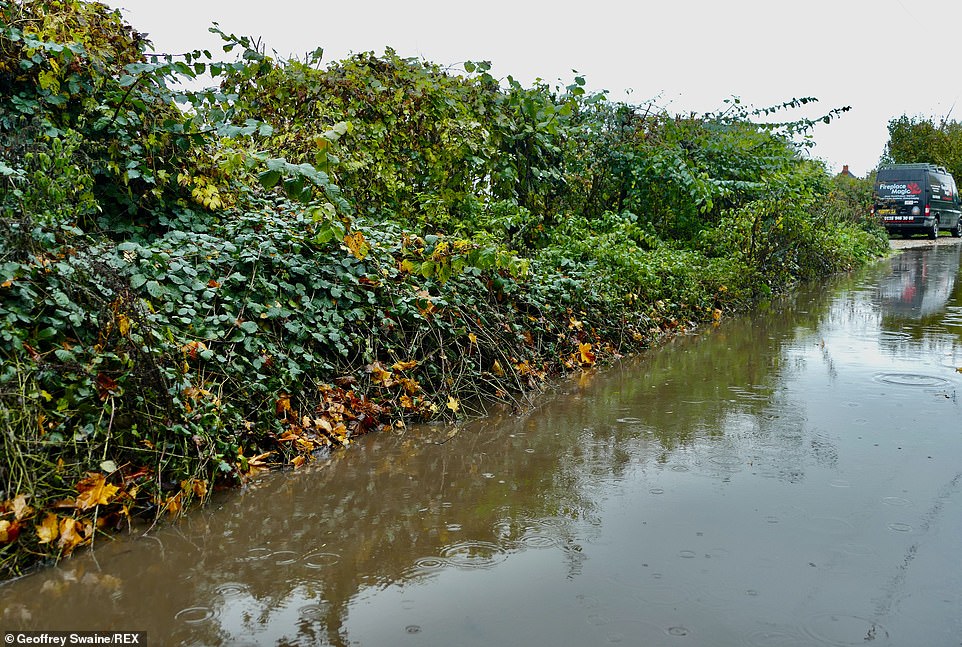 Country lanes begin to flood with all of the heavy rainfall that fell throughout yesterday afternoon in Dunsden, Oxfordshire