Britain’s ‘grumpiest landlord’, 59, who makes punters pull their own pints, has no TV or WiFi and has a cat called Hitler, says lockdown is ‘dream come true’ because he doesn’t have to deal with customers

Pubs in the UK have been closed for over a month now due to the coronavirus pandemic, but for Britain’s ‘grumpiest landlord’ lockdown is a ‘dream come true’ because he doesn’t have to deal with customers.

Steve Cotten, 59, took the reins of the Poltimore Arms in a part of Exmoor in Devon back in 2013.

And Mr Cotten, who has become known for making punters pull their own pints, revealed that the Government’s order to close all pubs, cafes and restaurants on March 20 was like ‘music to his ears’. 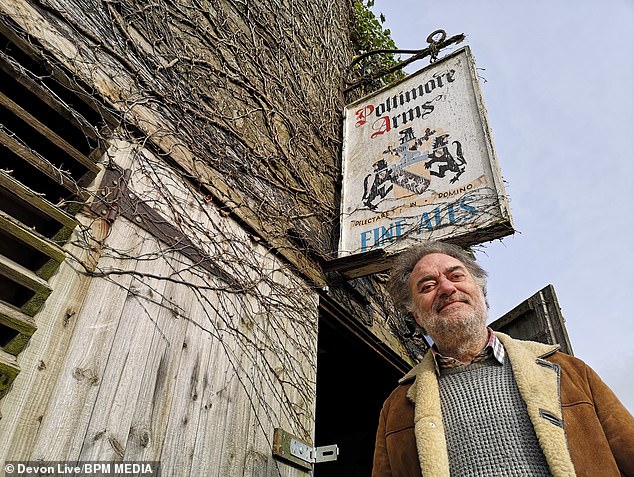 Steve Cotten, 59, took reins of the Poltimore Arms in a part of Exmoor in Devon back in 2013 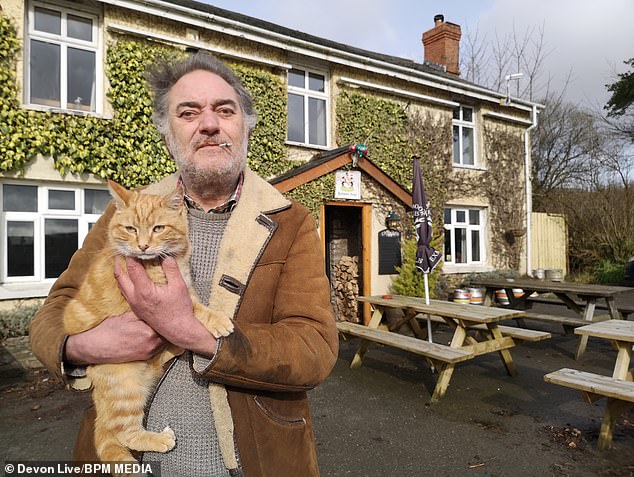 ‘The pub is now totally desolate, which is fantastic. Having no customers is like a dream come true,’ he said.

When he acquired the Poltimore Arms Mr Cotten, who has a ginger cat called Frederick Albert Hitler, spent his evenings drinking alone – until eventually people discovered it had reopened.

He added: ‘All my wishes come at once. It is just me and Fred sitting and drinking alone in the pub like it was in the good old days – before we somehow started getting customers. It is perfect.

‘Life has never been better – just me and Fred (Hitler) here on our own in a dark and dingy pub – with no customers bothering us to be served. It is bliss.’

Mr Cotten’s pub, which has no phone, TV or WiFi, became a favourite among royals and stars such as Prince Harry and artist Damien Hirst who visit the area for shooting and hunting.

Mr Cotten also revealed that he won’t be hit as hard financially by the Covid-19 lockdown.

‘I have made more money in the last five weeks than I have in the seven years,’ he said. 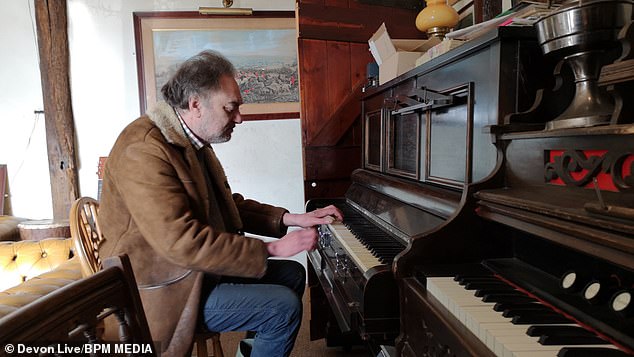 ‘I have no staff to pay, no overheads, no water bills. I just have four solar panels running off a high tech battery. I have not needed a generator at all.

‘We were told if we didn’t do televisions, or food that we couldn’t survive.. But with no TV, no fruit machines, no fossil fuels etc we are ready to open again at any time. I am not sure how many other pubs will be able to.

‘I am just a pub. We were told we were doing everything wrong with no room, no food etc. By not doing all of those things we are in a much stronger position.

‘We are a dark and cold and miserable boozer – and that’s what people like about it.’ 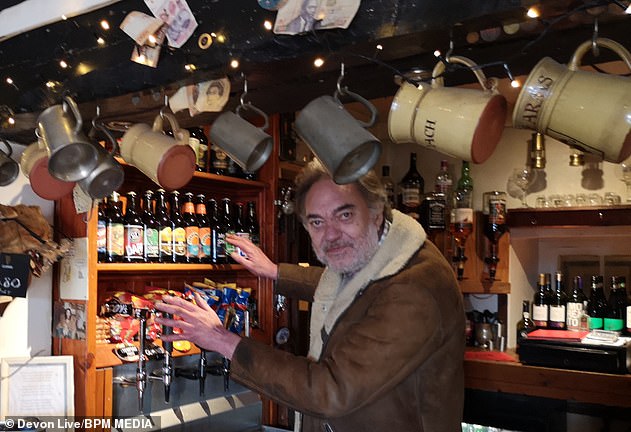 Mr Cotten’s pub, which has no phone, TV or WiFi, became a favourite among royals and stars

Mr Cotten has spent some of his time in lockdown drinking outside the pub and he conceded that the Poltimore Arms is providing a takeaway service.

‘The police helicopter was over us and two police cars arrived as they thought we were still running the pub,’ he said.

‘They tested everything inside and didn’t pursue charges. There is an increased police presence now and they drive past every day – and I just offer them beer.

‘I spend my day out the front of my pub with a pint of beer. I am allowed to, but there is no one drinking with me. They can come and buy beer to takeaway though.

‘They told us on the Friday night that pubs were closing. The pub was full but we shut the next day. I have not been running a pub since and have drained all the lines.’

It was claimed earlier today that pubs could reopen if landlords rationed beer to two or three pints per customer then asked them to go home to help with social distancing measures.