A British former cage fighter was ‘left for dead’ on a street in Australia after he was brutally attacked by a crowbar-wielding Muslim taxi driver after they argued about religion.

Euan Fraser, 30, from Dundee, Scotland, said the cabbie beat him unconscious on his doorstep, leaving him with PTSD and a bleed on the brain.

The atheist claims the attack happened after he got out of the car in Melbourne after what he thought was a harmless discussion about the ‘deaths and wars’ caused by religion. 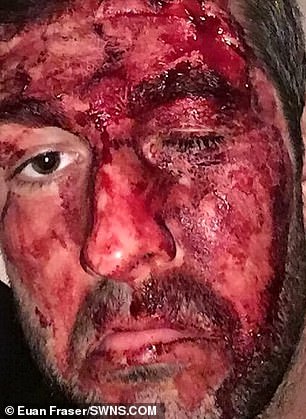 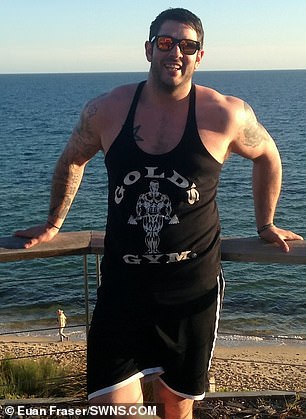 Euan Fraser, 30, from Dundee, Scotland, (pictured after the attack, left; and before, right) said the cabbie beat him unconscious on his doorstep, leaving him with PTSD

Mr Fraser, from Dundee, Scotland, was knocked out and medics did tests which showed he was struck with a thick metal pole, like a crowbar.

The backpacker was forced to shell out £4,000 for medical treatment.

Describing the incident, he said: ‘As I got out of the taxi I just heard footsteps behind me and heard a loud bang. Then I felt this immense pain in my head and I was knocked clean out.

‘I was laid into when I was on the floor. I was left lying there in a pool of blood. He left me for dead.

‘I woke up with blood in my eyes and my clothes were soaked. I stumbled into the kitchen and it looked like a murder scene.

‘I had never seen so much blood. My whole body was in agony. I was so scared.

‘I needed 12 stitches on my face and I had a few broken ribs, a dislocated shoulder and a bleed on the brain. It has totally changed my life forever.’

Mr Fraser, who stands 6ft 5ins tall, flagged down the yellow cab after a night out with a friend in Melbourne in June last year. 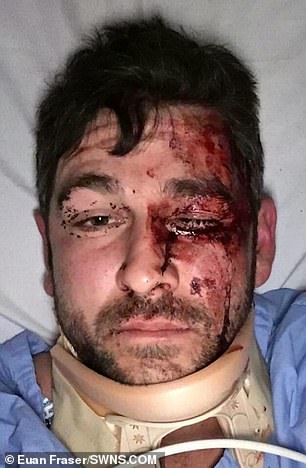 The tourist recalled how he and the taxi driver spoke ‘at length’ about the driver’s Muslim background and he became visibly annoyed when he said he was an atheist.

Mr Fraser, who was working on a farm at the time, argued that religion had ‘played a part in causing deaths and wars’ throughout history.

The Architecture student said: ‘He didn’t like it at all when I started expressing my views. He started to preach his religion on me.

‘I argued that science was responsible for evolution rather than religion, which he didn’t like either.

‘I tried to change the conversation but he kept going on about it. I could see he was getting wound up.’

He got out the car expecting the cabbie to drive off when he was smashed over the head and ‘beaten to a pulp’.

When he woke up he recalls having pain all over his body and believes his assailant battered him as he laid unresponsive on the pavement.

He stumbled into his home before collapsing on the kitchen floor.

Mr Fraser sustained bruised ribs, a battered shoulder, multiple cuts to his face and a bleed on the brain during the sickening attack.

He called an Uber to Sunshine Hospital in Melbourne where he stayed for around a week, and was forced to borrow money from friends to pay for a £4,000 medical bill.

He was treated on a specialist mental health ward after he started experiencing suicidal thoughts.

Mr Fraser has been reimbursed for his medical bills and awarded £2,500 in injury compensation by the Australian government following the attack. 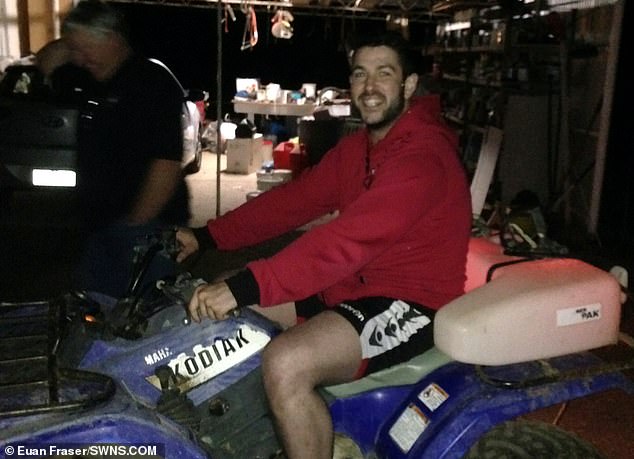 Mr Fraser sustained bruised ribs, a battered shoulder, multiple cuts to his face and a bleed on the brain during the sickening attack

Police investigated but have yet to trace the taxi driver.

Mr Fraser travelled home to his family a few weeks after the attack and has only just felt able to speak out.

The Briton, who lives with girlfriend, Sharon Macrae, 34, said he’s been left mentally scarred, now suffers with PTSD and often has nightmares.

‘It has left me in a terrible place and has totally changed my life,’ he said. ‘I used to be a really confident person but since the attack I have terrible nightmares. It has seriously affected my mental health.

‘Whenever I think about it I get upset. It was just absolutely shocking. I just can’t believe that someone would do that to me. I’m a big guy, 6ft 5in tall and 20 stone, and I never thought anyone would be capable of that.

‘I’ll be stuck with PTSD for life. I wake up screaming and shouting in the night quite a lot. I keep reliving what happened in my head. I will never be the same again.’ 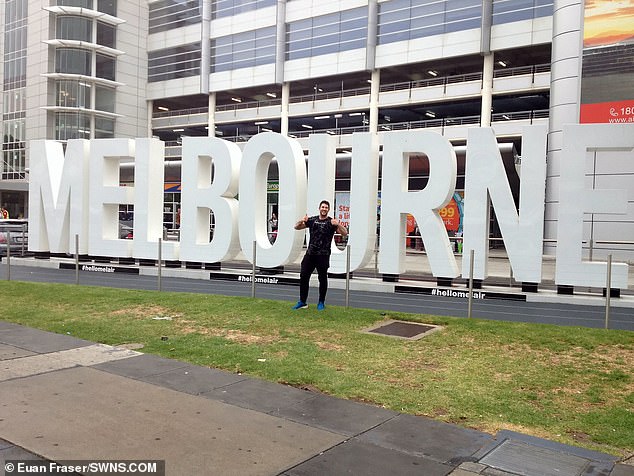 The former cage fighter on holiday in Melbourne, Australia’s second-biggest city, before the attack

A Melbourne Police spokesperson said: ‘Police are investigating the circumstances surrounding an assault in Aberfeldie on 12 June, 2017.

‘It is believed a man was standing outside his home address on Fawkner Street in the early hours of the morning when he was struck in the back of the head by an unknown offender.

‘The victim, 29-years-old at the time, sustained serious head injuries. The victim reported having a verbal altercation with a taxi driver prior to the incident.

‘Investigators have not identified the offender at this stage and the investigation remains ongoing.

Anyone with information is urged to contact Crime Stoppers on 180 333 000 or submit a confidential report at www.crimestoppersvic.com.au.