A British holidaymaker is fighting for his life after being mowed down by a drunk driver in Brazil, hours after the driver was allegedly released for the same offence.

Christopher Peck, 34, was two weeks into a four-month biking holiday around Brazil when a drink driver knocked him down at 2.30pm local time on April 20.

Medics were forced to amputate his left leg below the knee and he is now in critical condition in a hospital in Corumbá, on the border with Bolivia. 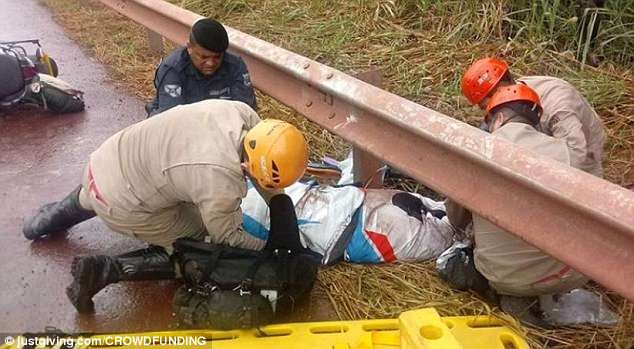 Christopher Peck, 34, from Cumbria, broke all of his ribs, lost his left leg below the knee and was placed into a coma after being hit head-on by a drunk driver in Brazil

His family say he desperately need to be moved to a bigger hospital to treat his injuries, but insurance companies are refusing to pay out on three policies he took out before leaving.

His relatives are appealing for £200,000 via Just Giving to pay for treatment.

On the page they say the drunk driver, 32, had been out of prison for just four hours after serving time for a similar crime.

The family say the drunk driver was attempting to overtake another car when it smashed head-first into Christopher as he was coming the other way.

Christopher’s sister, Natalie Taylor, 49, said the family only found out about the tragic accident thanks to a helpful local hostel owner, Pablo.

Chris was able to tell paramedics he was staying with Pablo before he lost consciousness at the scene.

The drunk driver who hit Mr Peck had been released from jail just four days before for a similar offence, Brazilian media reports

Brazilian authorities then contacted Pablo who in turn called his cousin who was living in London, who then alerted the local British police.

The family was then told about the devastating news at 10.15pm UK time on April, 20.

Natalie, from Cockermouth, Cumbria, said: ‘It is devastating, it is the phone call you never want to receive. Especially with him being so far away, I just felt helpless.

‘He is such beautiful, loving lad. It’s heartbreaking.

‘We had been keeping up with his adventures on a family Whatsapp group.

‘I knew in my gut that something was wrong when he hasn’t received a message from him that day as we’d heard from him everyday until then.’

Upon hearing the news Christopher’s mother Sylvia, 72, and brother Sean, 47, got the earliest flight they could and raced to Brazil on Sunday April 22.

The pair have been by Christopher’s bedside ever since and he remains in intensive care but has yet to wake up despite being taken out of the induced coma on Tuesday last week.

Natalie, a mother-of-two, said: ‘I have been in touch with my family constantly while they have been over there.

‘They have had some language barriers but the surgeon speaks a little bit of English and said Chris knows they are there which is reassuring.

‘He moved his right arm slightly when he heard my mum and brother in the room which was the biggest reaction he had until that point.’

Since then Chris, who broke all his ribs in the collision as well as losing his lower left leg below the knee, has opened his eyes just once.

When the news came to light the driver had been released from prison for dangerous driving offence just four days earlier, it hit the family particularly hard.

Natalie said: ‘The fact he had done it before and was then able to just go out and do it again is disgusting.

‘My brother Sean lost his 17-year-old son, Jordan, who was knocked off his motorbike after only having it two days, seven years ago so this is such devastating.’

Natalie said he desperately needs to be transferred to Albert Einstein Hospital in Sao Paulo, Brazil., which has more advanced technologies but his insurance company, World Nomads, is refusing to pay.

She said: ‘He desperately needs to be moved but we can’t afford to do so.’ Mr Peck’s family are now trying to raise £200,000 for his care, saying his health insurance company is refusing to pay for treatment

Despite Fisheries Officer Chris taking out three insurance policies, one from his bank, Halifax, one from World Nomads which covered him medically and another covering his motorbike from Allianz.

However, despite multiple policies, the family are struggling to get any to cover the costs of Chris medical care.

Natalie said: ‘He got three to be extra cautious to cover him against anything awful happening like this.

‘I can’t believe how hard they are making it for us as a family to get Chris the care he so desperately needs.

‘The bank said they would pay for the first 24 hours at the bigger hospital as well as his flight, but the hospital won’t take him because we have no other means to fund the rest of his treatment.

‘He got explorer insurance with World Nomads, which claim in the small print that his bike had a bigger engine than what they cover in medical injuries. It’s just ridiculous.’

Chris, who was just at the start of his biking adventure around Brazil and North America, wasn’t planning on coming home until August 8 after being on leave from working in the Falkland Islands.

Natalie who works as a hairdresser said: ‘He has always been so active, he was always out and about somewhere.

‘He actually served in the Navy for seven years so now just being left with the one leg will obviously be really difficult for him to accept what has happened.’

World Nomads, Halifax and Allianz have all been approached for comment.