A British family’s sunset holiday cruise turned into a nightmare when their catamaran capsized in Cape Town harbour.

The family of five,  a couple, their son and daughter and the son’s partner, were returning to the harbour after a ‘champagne pleasure cruise’ on a catamaran yacht staffed by a crew of three when a gust of wind overturned the boat.

While the others found their bearings in the cold water, the crew realised the mother was missing – and remained inside the hull of the 50ft catamaran. 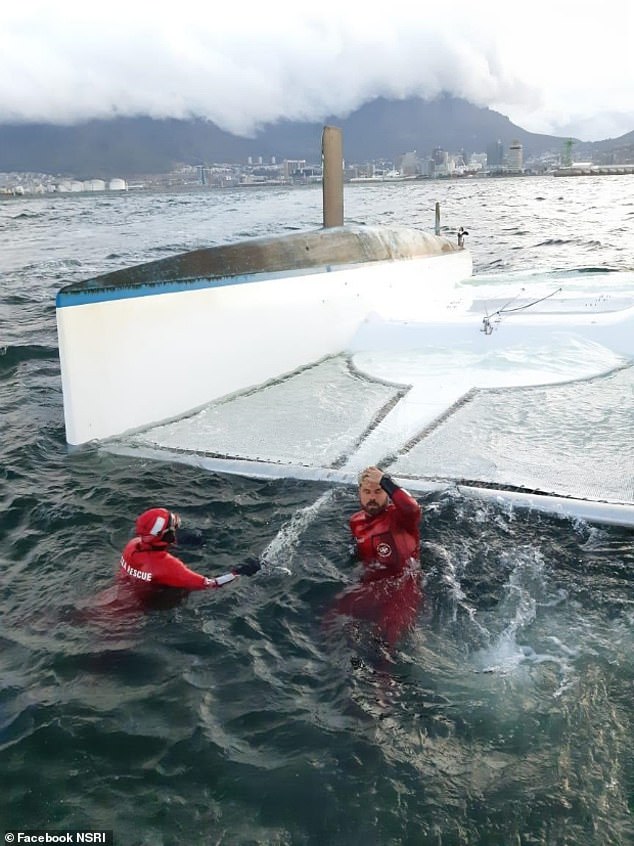 Holiday horror: The British woman ended up trapped inside the catamaran as she had gone down into the galley as it was overturned

The yacht skipper bravely took off his life jacket and free-dived under the water and through the rigging to try and save her.

He surfaced inside an air pocket in the galley and found the terrified woman and calmed her down and told her she would have to swim back out the catamaran.

He instructed her to dive down through the freezing water and guided her out through the galley doors and back up to the surface to his two waiting crew members.

The terrified mother was in agony with a broken shoulder and had to be helped and guided to safety through the choppy seas.

The NSRI lifeboats based inside Cape Town harbour had been alerted and they launched two sea rescue craft Spirit of Day and Spirit of Vodacom who raced to the scene. 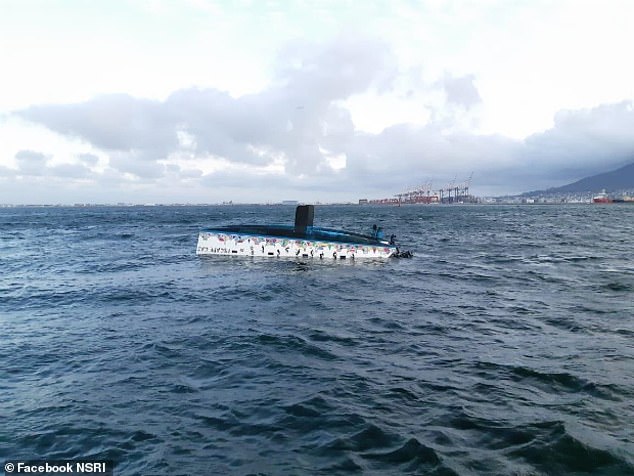 Bravery: The hero yacht skipper took off his life jacket and free dived underneath the 50ft catamaran, to find the mother terrified and with a broken shoulder in an air pocket in the hull 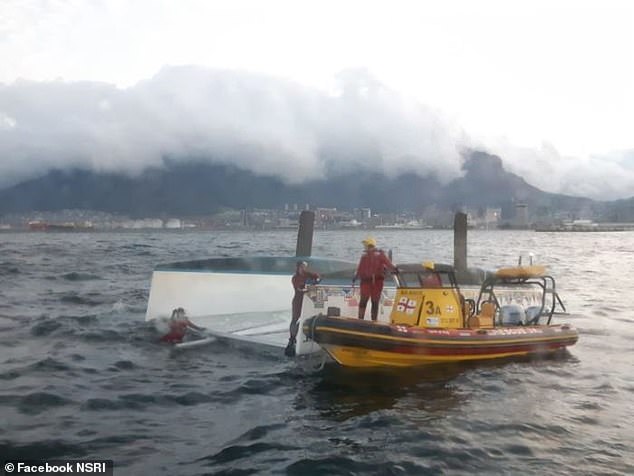 Rescue: Images taken by the local National Sea Rescue Institute’s crew shows the Brits and the yacht crew being rescued from the catamaran

They were backed up by the Cape Town Fire and Rescue Dive Unit and a Police Dive Unit and they found the five UK tourists and three crew safe on the upturned hull.

The mother had suffered a fractured shoulder and two of the crewmen had suffered non-life threatening injuries and waiting paramedics rushed them quickly to hospital.

National Sea Rescue Institute spokesperson Craig Labinon said all eight of those on board suffered mild hypothermia as well so all were taken to hospital for checks.

He told News24: ‘She was trapped in the galley where water was rising as the cabin filled with water causing a fast diminishing air pocket that had provided some relief.

‘From what we understand we believe the skipper of the catamaran free dived under the catamaran after she capsized and he was able to bring the mum up from below deck.

‘Eight persons – three local male crew members and five tourist passengers from the United Kingdom – were found on the upturned hull of the boats when we arrived.

‘All were wearing life jackets and they were rescued off the upturned hull and brought by the NSRI sea rescue craft to their base at the V & Waterfront for treatment’. 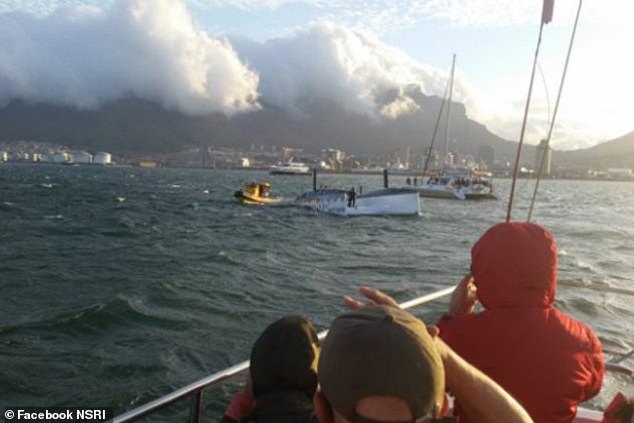 Safely out: The skipper was able to guide the British woman out of the overturned boat despite her broken shoulder

The South African Maritime Safety Authority has been alerted and is investigating the cause of the accident to ensure that tourists using the sunset catamarans are safe.

The daily trips and £20-a-head sunset cruises are popular with British tourists and whales and dolphins are often seen on the trip that heads out towards Robben Island.

It capsized at 6.49pm on Monday near the breakwater and was due to dock at 7pm as darkness fell fellow sailors said they thought sailing in such strong winds was unwise.

Tourism officials are assisting the UK family and the British Consulate was alerted to render assistance to their traumatised countrymen, the NSRI said.

The catamaran was towed to nearby Granger Bay just outside the Port of Table Bay in the capsized position and it was anchored to await later recovery,

It is hoped that salvage experts will be able to right the catamaran.

Kevin Knight, who owns the catamaran, told News24 that he was awaiting the outcome of the investigation and that their focus now was getting the boat out of the water.

The boat operators did not comment and said they would release a statement at a later stage.

NSRI Table Bay station commander Quentin Botha told News24: ‘One female suffered a fractured shoulder in the ordeal and she is being treated for that in hospital.

‘They were bruised and shaken up by the catamaran ordeal but full of praise for the NSRI and the emergency services rapid response and subsequent after care’ he said.

The UK family were picked up from hospital by the owner of the guest house where they are staying. They have declined through official channels to be identified.