Theresa May pushes back ‘meaningful vote’ on Brexit plan as talks with EU counterparts over divorce deal continue. 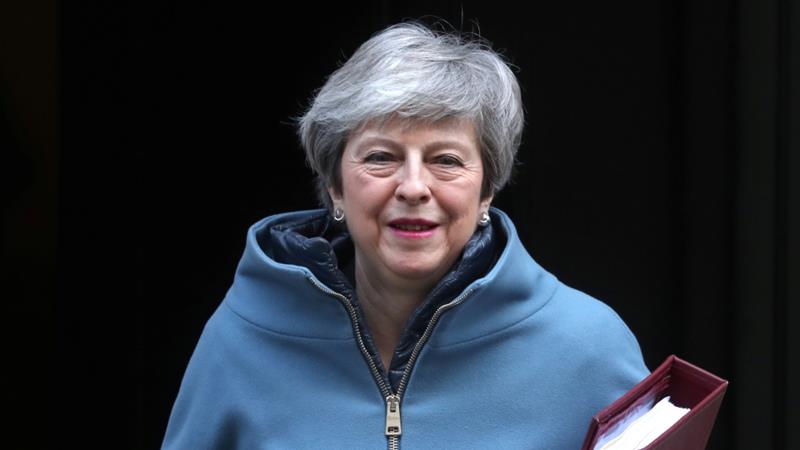 British Prime Minister Theresa May has postponed an expected “meaningful vote” on her widely maligned Brexit plan this week, saying MPs may have to wait until March 12 to have their say on the divorce deal.

Speaking to reporters before travelling to a European Union-Arab League summit in Egypt, May said on Sunday her Brexit negotiation team would continue talks with EU officials in a bid to secure a deal palatable to British legislators, ruling out a vote this week.

“We won’t bring a meaningful vote to parliament this week but we will ensure that that happens by the 12th of March,” May said.

“It is still within our grasp to leave the European Union with a deal on the 29th of March and that is what we are working to do,” she added.

May had been expected to put her proposed divorce deal to a vote in the UK’s lower chamber House of Commons on Wednesday.

The latest delay comes after her Brexit plan was resoundingly defeated last month by 230 MPs – the biggest parliamentary defeat in British history – and underlines the difficulty May is having in attempting to get the agreement ratified.

Reacting to May’s announcement, the main opposition Labour Party accused the British leader of “recklessly running down the clock in a desperate attempt to force MPs to choose between her deal and no deal”.

“This decision to further delay the meaningful vote is the height of irresponsibility… Parliament cannot stand by and allow this happen,” Labour’s Brexit Secretary Kier Starmer said in a tweet.

Starmer’s comments were followed by a pledge from Labour Party leader Jeremy Corbyn to work with other parties’ MPs to prevent a no-deal Brexit.

“ Theresa May is putting the country at risk by recklessly running down the clock to force MPs to choose between her bad deal and a disastrous no deal,” Corbyn said in a tweet.

“Labour will work with MPs across the Commons to prevent no deal, break the deadlock and build support for our alternative plan,” he added.