Briton, 74, shot in the leg confronting robbers at his home in Spain

‘Wealthy’ British man, 74, is shot in the leg after confronting two robbers at his Costa del Sol home

A wealthy Briton has been shot during a break-in at his luxury Costa del Sol home.

The 74-year-old, believed to be a retired jeweller, was rushed to hospital with a gunshot wound to his leg after confronting two armed intruders.

A police manhunt is now underway for the pair. 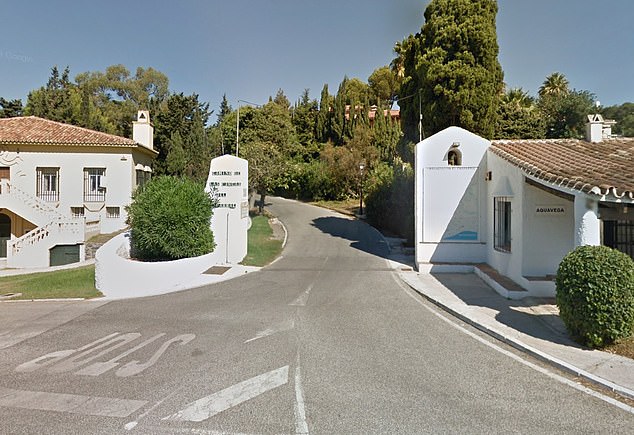 A 74-year-old British man, thought to be a retired jeweller, was shot in the leg at his home in the Costa del Sol neighbourhood of El Chapparal (pictured) around 8.30am Wednesday

The incident happened around 8.30am at a villa in an area of Mijas Costa between Marbella and Fuengirola known as El Chaparral.

A neighbour called the emergency services after hearing the gunshot and confirming the pensioner had been injured.

One well-placed source described the victim as a jeweller. He is thought to have been alone in his home at the time.

Police could not be reached for official comment on Wednesday, but a Civil Guard source said it was being treated at this stage as an attempted robbery.

One local report said: ‘When the two intruders entered the house, the gunshot victim told them to leave and they responded by opening fire.’

Nothing of any great value is thought to have been taken.

It comes just four days after a 50-year-old British tourist was left fighting for his life after being shot in the face in Marbella following a bar fight.

The victim underwent an emergency op at a hospital in Malaga.

Police confirmed afterwards he had suffered two gunshot wounds to his face.

The unnamed holidaymaker is thought to have been staying on a luxury residential estate in Estepona a 25-minute drive west of Estepona.

The shooting was described at the time as the fourth in the province of Malaga in a month.