Revealed: Britons do £1.24TRILLION worth of unpaid work every year including looking after children, cooking, ironing, and cleaning

Next time you feel fed up of doing the chores around your houses, have a think about the money you’re saving.

For it was revealed today that Britons do £1.24trillion worth of unpaid household work every year – including looking after children, cooking, ironing and cleaning – which is equivalent to nearly £19,000 per person.

The total figure is bigger than the UK’s non-financial corporation sector, which was £1.04trillion. Since 2005, the values of adult care, childcare, laundry, home cooking and transport services have all grown by more than half. 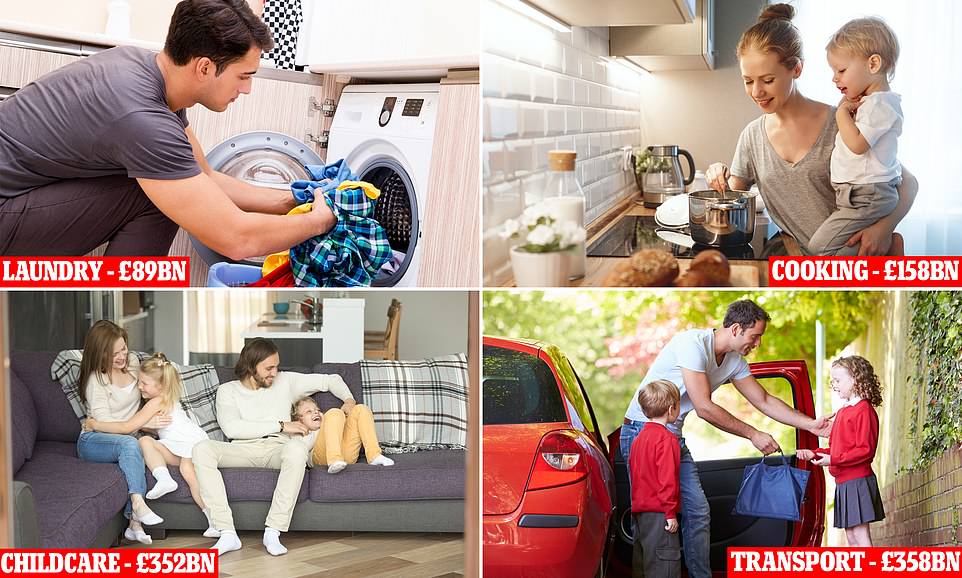 Unpaid transport services – such as driving yourself or others to work – made up the biggest proportion of the 2016 total at £358billion – while childcare was second at £352billion, equivalent to about £5,350 per person.

The value of unpaid household service work was equivalent to 63 per cent of gross domestic product in 2016, just down from 64 per cent in 2015, which was the highest ratio since the start of the series in 2005.

The figures also show the value of unpaid household services has grown faster than GDP per head between 2005 and 2016 – 67 per cent compared with 31 per cent respectively in current prices. 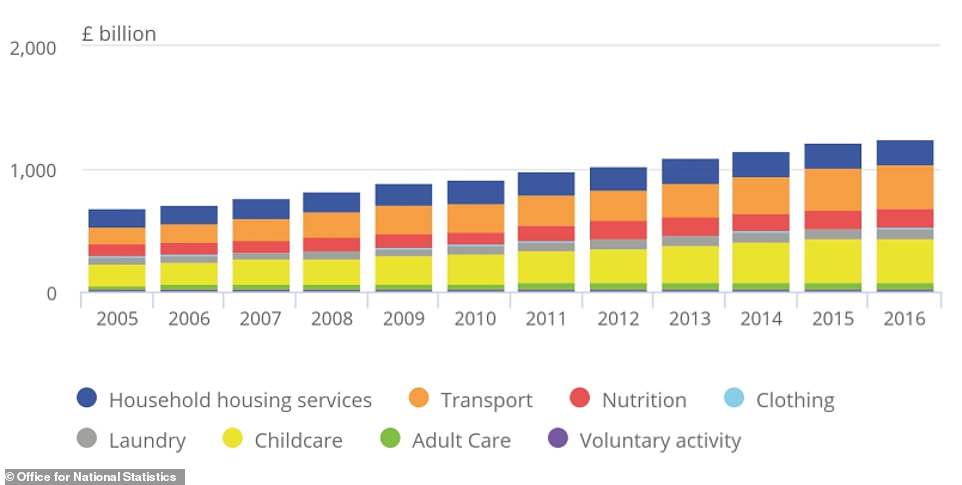 The values of adult care, childcare, laundry, home cooking and transport services have grown by more than half since 2005

Scotland has a relatively high proportion of nursery hours, when the share of formal childcare hours is considered by country

Some 16 per cent of consumer spending was spent on direct costs for providing unpaid work services – mainly on fuel, renting and food, according to the data released this morning by the Office for National Statistics.

Meanwhile the overall value of unpaid adult care is increasingly being driven by those needing full-time care, with continuous care hours accounting for 87 per cent of total adult care hours in 2005 and 90 per cent in 2016.

The study also found that growth in informal childcare output was 1 per cent in 2016, lower than the 4 per cent growth in 2015 – and this was said to be mainly due to a fall in the rate of increase of childcare prices.

The ONS said: ‘We measure these activities to expand upon the traditional analysis of GDP, which largely accounts for the market production and consumption of activities with a price, and freely-provided government services.’