‘Brussels has no shame!’ Italian populist leaders demand an EU commissioner resigns after claiming financial markets would ‘teach Italians to vote for the right thing’

Furious Italian populist leaders have called for the EU’s budget commissioner to resign after he claimed plummeting markets would teach Italians not to vote for populist parties.

His remarks prompted a scathing backlash from Italy’s League leader, Matteo Salvini, who accused Oettinger of telling Italians how they should vote.

‘INSANE, Brussels has no shame,’ Salvini said on Facebook. ‘Can you imagine such disdain for democracy … he should resign this afternoon.’

Salvini also said Oettinger’s comments were ‘threatening’ and showed a ‘German desire for hegemony and control.’ The populist 5-Star party has also called for Oettinger to resign.

Law professor Giuseppe Conte is trying to form a government of two populist parties in Italy.

But nervousness about what could be an administration hostile to fiscally sound measures has rattled bond markets. The League was ready to form a government with the anti-establishment 5-Star Movement, until the attempt fell apart due to a dispute over their proposal for economy minister.

This week, markets sold off Italian assets amid political turmoil.

Oettinger said he hopes Italy’s prospective new government will master a ‘big learning curve,’ and cautioned that the eurozone’s rescue fund wouldn’t be able to stabilize the country.

‘My worry, my expectation, is that the coming weeks will show that the markets, government bonds, Italy’s economy, could be so badly hit that these could send a signal to voters not to elect populists from the left or right,’ Oettinger had told Deutsche Welle television in an interview.

Saying markets had already been hit by efforts to form an anti-establishment ruling coalition, Oettinger added: ‘This was linked to the possible formation of a government. I can only hope that this plays a role in the election campaign by being a signal not to hand governing responsibilities to the populists.’ Italy’s FTSE MIB was down 2.8 per cent this morning with the country in fresh political turmoil British stocks also fell on Tuesday, joining a Europe-wide sell-off triggered by worries over the political crisis in Italy

‘The rescue mechanism … could hardly stabilize such a large economy as Italy,’ the German conservative told the newspaper.

He added: ‘So I hope very much that the governing parties will master a big learning curve.’

Oettinger added an Italian euro exit is ‘not at all likely.’ 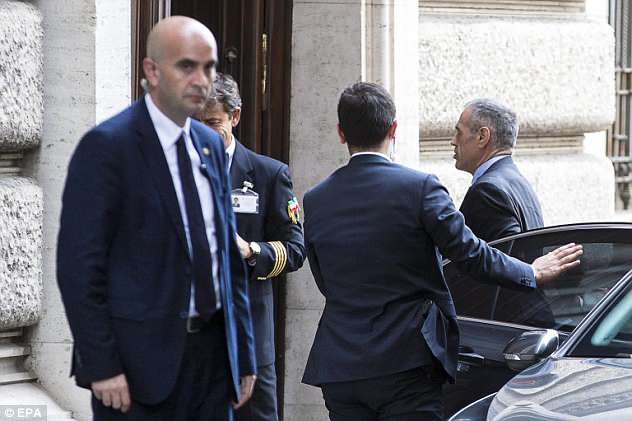 The uproar highlighted how a possible new government run by the anti-establishment League and 5-Star movement raised new fears that the third-biggest economy in the euro zone could quit the single currency, jeopardising the entire project.

But it also fuelled an anti-Brussels and anti-German narrative in Italy, which could benefit both parties in an election expected within the next few months.

At the weekend, 5-Star and the League were thwarted in naming a finance minister who has opposed Italy’s use of the euro.

The head of state then named a technocrat premier on Monday to prepare for new elections following an inconclusive vote in March.

Opinion polls put the two parties in the lead. Meanwhile, senior EU officials called for discretion from their colleagues on Tuesday after Oettinger’s comments.

The European Commission’s chief spokesman called Oettinger’s remarks ‘unwise’ and insisted that the EU executive was not trying to influence the Italian elections.

‘It is the Italians and nobody but the Italians who will decide the future of their country. Nobody else,’ Margaritis Schinas told reporters.

Donald Tusk, the former Polish prime minister who chairs the European Council, the separate EU body which groups national leaders, was blunt in chiding the executive Commission: ‘My appeal to all EU institutions: please respect the voters,’ he tweeted.

‘We are there to serve them, not to lecture them.’

Though less frank than Oettinger, other senior EU officials have, in public and private, suggested that pressure from investors who fear Italy could over-extend its public finances is the strongest element in curbing new borrowing by parties who promise higher spending and lower taxes.

Oettinger, 64, a former premier of the wealthy southwestern state of Baden-Wuerttemberg, is from Chancellor Angela Merkel’s Christian Democrats.

He has a record of plain-speaking, and of gaffes.

European Commission President Jean-Claude Juncker has reprimanded him in the past over heavy attempts at humour that involved slights on gays and the Chinese.