An acrobatic bullfighter who leaps over charging animals instead of drawing blood with a sword has died after being gored while trying to rescue a friend.

Rubén Quintanar died at La Fe Hospital in Valencia, Spain, minutes after being pierced through his lung and heart.

He had gone to the aid of a friend who had fallen during a village fiesta in Paiporta, about 5km (3.1 miles) from Valencia. 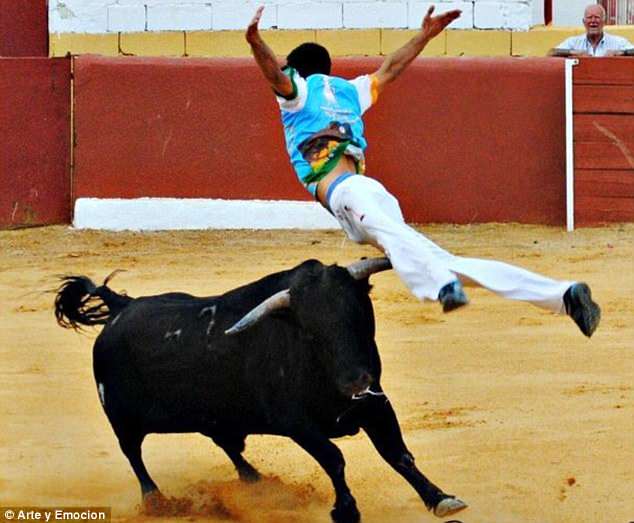 Rubén Quintanar, above, died at La Fe Hospital in Valencia, Spain, minutes after being pierced through his lung and heart (stock photo)

The 27-year-old was a respected and acclaimed ‘recortador’ – recortadores is a bloodless form of bullfighting where performers calmly demonstrate acrobatic ability, including leaping over charging bulls without the help of a cape or a sword.

Those who show the least fear by getting the closest to the animals are the ones in contention to win.

While attending the village fiesta, Quintanar slid in front of a charging bull which then attacked him, according to a report in Las Provincias.

Despite the efforts of paramedics and local police officers at the event, ‘nothing could be done’ to save the young man’s life, and he was pronounced dead shortly after arriving by ambulance at the local hospital.

Festivities had begun at about 5.45pm on Saturday in Paiporta, when the first bull was introduced – Botijero, a black and white animal from the Domingo López Chávez Ledesma ranch in Salamanca.

While the crowd watched, one of 2,000 runners lost his footing near the bull, which prompted Quintanar to go dashing to his aid, in an attempt to distract the beast and prevent it from attacking the fallen man.

However, after he also lost his grip on the surface and slid right in front of the bull, it then aimed for his upper body. 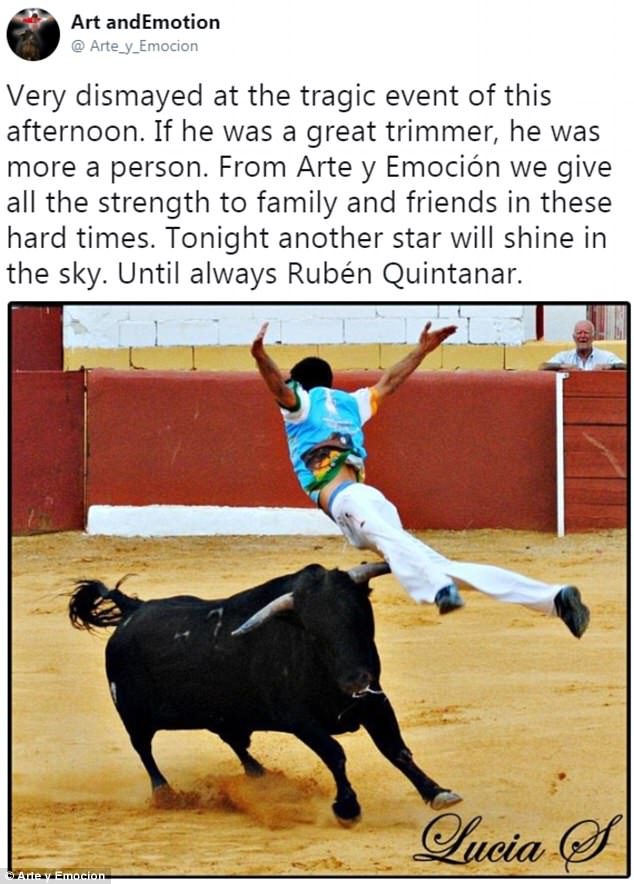 Marco Antonio Navarro, president of the El Cer Cerril de Paiporta club, an association that organised the celebration, suspended the rest of the event out of respect for the dead man.

An upset Navarro said: ‘In nine years nothing like this had happened. We are talking about the death of a kid.’

Fellow bullfighters have paid tribute to Quintanar, with bullfighting event organisers Art and Emotion saying via Twitter: ‘Very dismayed at the tragic event of this afternoon… we give all the strength to [his] family and friends in these hard times. Tonight another star will shine in the sky.’