Paris: Faced with declining poll numbers and suspicions that he favours the rich, French President Emmanuel Macron fiercely has defended his business-oriented approach in a major speech, declining to renounce policies that have seen decreases in taxes for the wealthy as well as in protections for workers.

"If you want to share the cake, you've got to have a cake," Macron told a joint session of the French Parliament, in what he has established as an US-style annual state of the union address.

"It's misleading to fight for employees if you don't also defend companies." 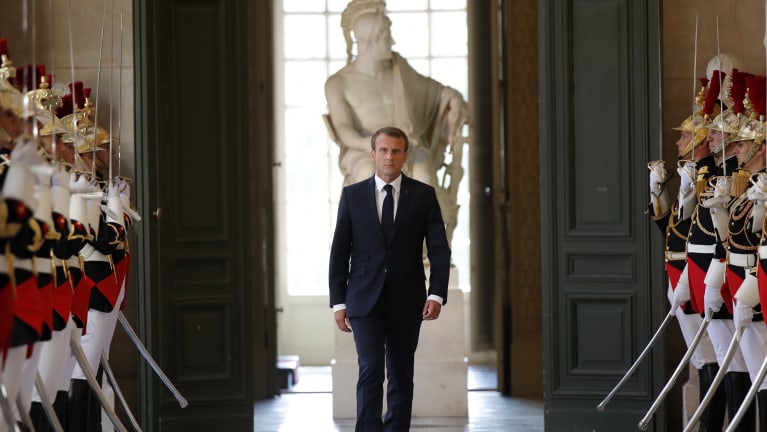 French President Emmanuel Macron walks to address both the upper and lower houses of the French Parliament at a special session at Versaiiles on Monday.

Macron, sometimes mocked for what critics call a monarchical style, was not giving up any of it on Monday. The address took place in the richly ornamented setting of the royal palace at Versailles, and he was shown on French television striding solemnly toward the chamber between two rows of resplendent red-uniformed plumed guards.

To critics that aura is of a piece with his program. Since taking office, he has stunned the French with a rapid rollout of laws changing labour, railways, taxes and education. These overhauls have reversed or chipped away at years of French social and economic policy, making the labour market more flexible, lightening the fiscal burden on the rich, ending the protected status of railway workers, and making universities mildly selective.

But the changes have yet to improve the quality of life for most people in France — unemployment still hovers around 10 per cent — and there is increasing grumbling that he is neglecting the social safety net, which sacrosanct in France. 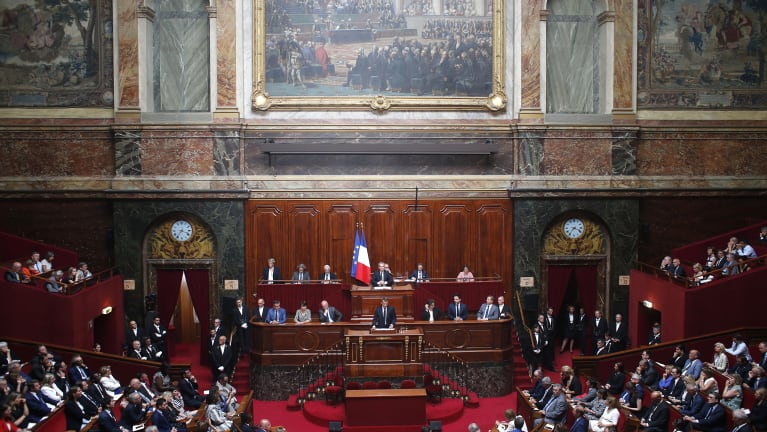 Emmanuel Macron gives his US-style state of the nation address.

His support has been eroding. A recent widely reported poll found that only 29 per cent considered his policies "fair." Just 32 per cent of respondents expressed confidence in him, a drop of 6 percentage points in one month, and there has been a sharp decrease in support from left-leaning voters who helped propel him into office in the spring of 2017.

Small missteps — the sharp public upbraiding of a teenager for perceived disrespect, a video in which he disapproved of the "truckload of cash" France spends on welfare, a large expenditure for new china at the presidential palace — have hurt his image.

The warning signs have come not only from polls measuring esteem, or absence of it, for Macron. Opposition politicians, largely invisible in his first year, have become increasingly bold. The French are indicating that they do not agree with the President's oft-repeated assertion that the left-right split is outmoded, and that he occupies the ideal centre. 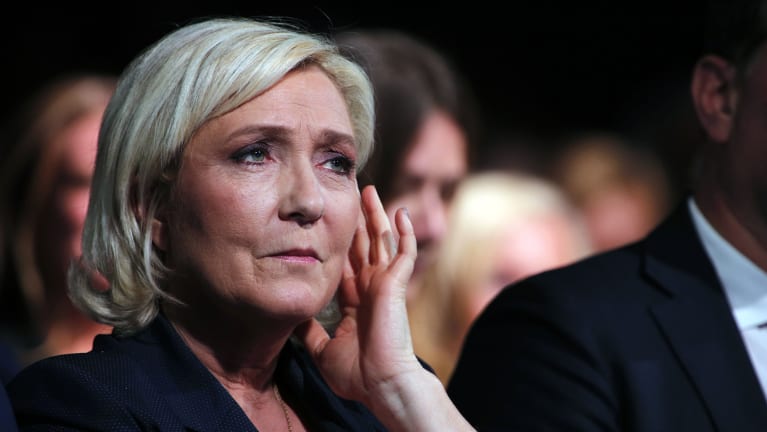 A recent poll of voting intentions for next year's European Parliament elections found the far-right Rassemblement National (which until recently was called the National Front) at 19 per cent. Macron's political movement, La Republique en Marche, stood at 23 per cent.

In Monday's speech at Versailles, Macron cited his "humility" up front and pleaded for more time for his "transformations to take hold in the country." But he then proceeded to stick to the guiding philosophy of his presidency: a rejection of welfare-state redistribution, an insistence that generalised prosperity is the key to lifting disadvantaged people out of poverty, and a US-style emphasis on equality of opportunity rather than outcome.

"I don't like castes, rents or privileges," he added. "The creation of riches is the foundation stone of equity."

"A strong economy is the foundation of our social project, a plan for improving the life of everybody," Macron said, again breaking with the dogma of France's leftist governments, in one of which he was once a member. 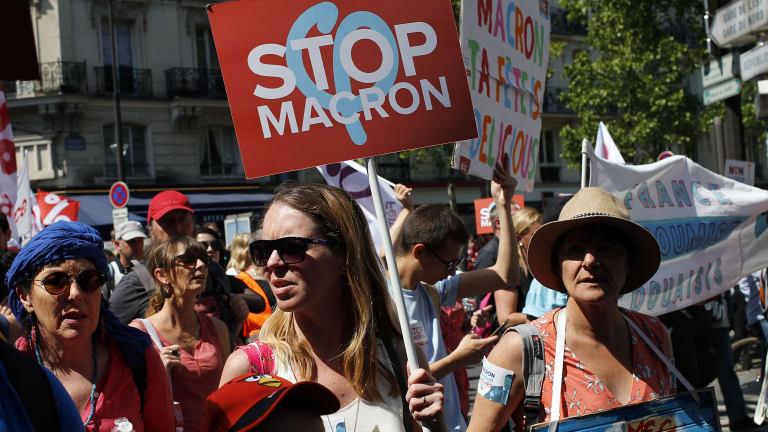 Protesters rally against Macron\’s policies in Paris in May.

It was not the first time Macron, a former banker, has unsettled some in France with US-style rhetoric extolling capitalism. In one speech, he spoke derisively of passing by "people who are nothing" in train stations. In 2016, when a union activist told Macron, then the economy minister, that he had "not a penny to pay for a suit" like the ones Macron likes to wear, he responded, "The best way to pay for a suit is to work."

One of the most anticipated, and feared, of Macron's promised overhauls are cuts to France's vast government expenditures, which at 56 per cent of economic output are one of the highest in the West. Macron said on Monday that his prime minister would present "strong and courageous choices," but said nothing concrete.

Reaction from analysts was mixed. "It was very rich and dense, in the sense that Emmanuel Macron touched on his main themes, like the 'society of emancipation,'" Bruno Cautres of Sciences Po said in an interview.

"He explained that his project was to redefine the role of the state, and that the French model has created a society of status," Cautres said.

"He wants to preserve the role of the state, but on a new foundation," the political scientist said. "To give back to individuals the possibility of affirming their life project," he said, to "those without status in the society."

"It was not marked by the seal of justice and equality," a spokesman for the Socialists, Boris Vallaud, told French television.

Marine Le Pen, the leader of the Rassemblement National, said on television that Macron's speech "was like a training session with a personal coach."

"As far as social injustice," she said, "the French are going to have their fill of it."