Washington: The 10.23am emergency call to the 23000 block of Buckland Lane was dispatched as a reported bee sting.

Responding firefighters quickly discovered how big of an understatement that was. 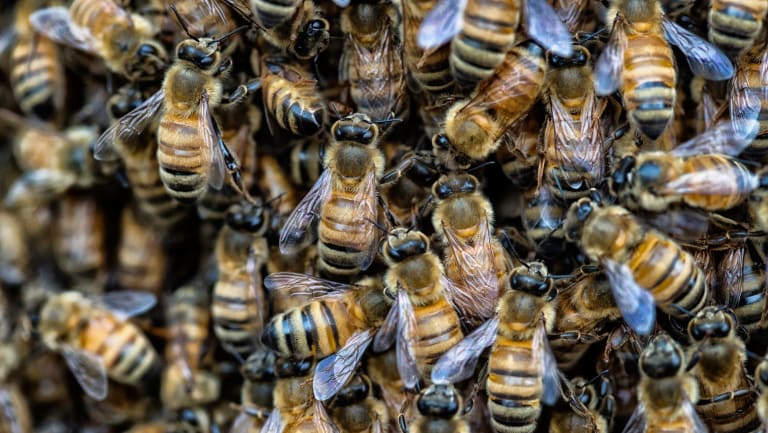 A swarm of bees.

When their truck pulled up to the home in Lake Forest, California, they saw a cleaning lady being attacked by a swarm of some 80,000 bees.

The woman – "approximately 50 years old," and identified only by her first name, Maria – was in the Orange County home with three other cleaners, and had stepped out to her car to grab a mop.

In doing so, she'd come to be viewed as a threat to the swarm of Africanised bees, who neighbours said had taken up residence in a nearby drainage pipe.

But that insight wouldn't come until later. As the Orange County Fire Authority team arrived at the horrific scene, its top task was trying to figure out how to separate the woman from the mass of attacking insects. 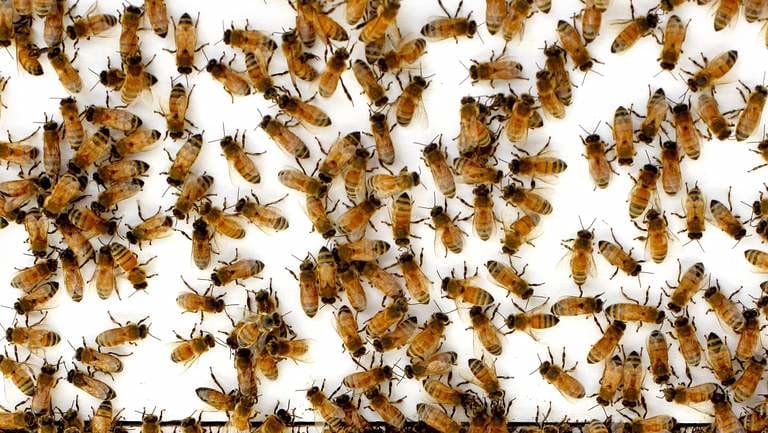 The bees "were almost in clusters," one of the firefighters, Ryan Wilson, told KNBC. "Maybe the size of a golf ball all over her . . . she had them on her face, around her mouth, around her ears, her neck and her hair."

Donning protective gear would take too long, the firefighters decided, so they sprung into action without it.

The emergency responders grabbed a carbon dioxide fire extinguisher and began spraying the bees that were attacking the woman, who was now barely conscious.

"It's so horrific, I will never lose the memory of seeing her just swatting at whatever she could," neighbour Cynthia Emmets told CBS affiliate KCAL.

Wilson said first responders were "spraying and they were freezing the bees as they were kind of hovering and landing on us."

They stopped the brunt of the attack. But when they got the woman to the hospital, she was still covered in bees. She was also in critical condition, having been stung more than 200 times.

Her son told firefighters that she is expected to survive, although her recovery will be arduous.

"When you get somebody stung hundreds of times, [bees] injecting that venom, you're gonna have a serious issue," OCFA Captain Tony Bommarito told KNBC. "Anybody, allergy or not, is gonna be in serious condition after that."

Two of the firefighters were also stung. They were treated and released from the hospital and returned to work.

African honey bees were brought to Brazil decades earlier to increase honey production, but were accidentally released into the wild. They crossbred with domestic honeybees, and have been making their way north ever since.

"They crossed into Texas . . . and have since invaded Arizona, New Mexico, Nevada and California," Eggen wrote. "The bees are territorial and aggressive, and are known for their habit of swarming and attacking a victim repeatedly. The insects can become agitated by vibrations from as far away as 33 metres and can pursue a victim for more than a quarter-mile (400 metres)."

The African bees look similar to their docile European-descended cousins, according to the Arizona Republic. Their temperament is what gives them a rotten reputation.

"They are very aggressive and they will sting in great numbers," Nancy Troyano, an entomologist with Western Exterminator, told the newspaper. "And they will pursue a threat for up to a quarter of a mile."

People being attacked should run away as fast as possible, but jumping in water is not a good idea with Africanised bees. They'll patiently wait for their victim to surface, then renew the attack. A telltale sign that an attack is about to occur, according to the US Forest Service: patrolling bees will head-butt intruders to drive them away from colonies.

After the attack in Southern California, first responders closed several blocks nearby, hoping to prevent anyone else from becoming an unwitting victim.

Then they called in the experts: a local bee company.

By that afternoon, people in bee suits had removed several buckets full of honey.