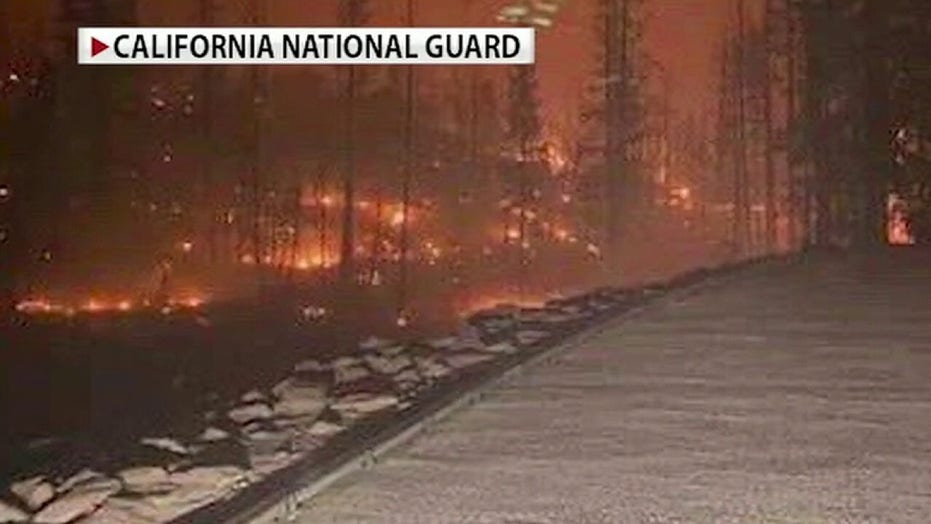 At least 163 people trapped by a fast-spreading wildfire near Central California’s Mammoth Pool Reservoir in the Sierra National Forest had been rescued by the Air National Guard as of early Sunday morning, according to a report.

Of those rescued from Mammoth Pool, Minarets, and nearby Cascadel Woods, 20 were hospitalized and some had critical burn injuries, emergency-response officials told Fresno's KFSN-TV.

Dan Lynch, director of the Fresno County Department of Public Health, told Fresno's FOX 26 Saturday night that rescuers were headed back to airlift more evacuees in the overnight hours but he didn't know the exact number.

"We're uncertain of what that number is, that will be a surprise," he told FOX 26. "We don't know what the critical nature of the injuries are but we do know there are injuries with this group and some of them are critical."

Those rescued were taken to an Air National Guard helicopter maintenance base by the Fresno Yosemite International Airport, FOX 26 reported.

Army Gen. Daniel Hokanson, chief of the National Guard Bureau, said on Twitter that the California National Guard was performing a "major" rescue with a CH-47 Chinook helicopter airlifting people trapped by the Creek Fire.

Hokanson shared a photo from the cockpit of the aircraft as it was performing rescues.

"So proud of our National Guard pilots and crews. Thoughts with those affected by this unfolding disaster," he tweeted.

Another 1,000 people were reportedly trapped within the campground but weren't in need of immediate rescue.

Authorities have issued evacuation orders throughout the region.

Sierra National Forest spokesman Dan Tune said those trapped were told to shelter-in-place – even if it meant jumping in the water – after the only road out of the campground was compromised, according to the Fresno Bee.

”Mainly our focus is the safety of all the folks all over the forest,” Tune said. "Just making sure folks are safe and get them evacuated.” 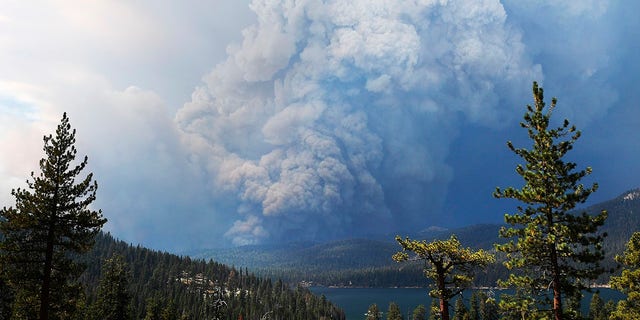 Plumes of smoke rise into the sky as a wildfire burns on the hills near Shaver Lake, Calif., Saturday, Sept. 5, 2020. (Associated Press)

The Creek Fire had exploded to 36,000 acres with zero containment by Saturday evening after sparking earlier in the day as temperatures reached into the triple digits amid a weekend heatwave that affected much of the state, according to the Bee.

Fire crews will attempt to get access to the area via water-dropping aircraft, Tune said.

“All our resources are working to make that escape route nice and safe for them,” he added.

Tune said a command post was expected to be set up at Sierra High School in Tollhouse, Calif.

The Fresno County Sheriff tweeted that Shaver Lake was closed to the public because of the fire and under evacuation order. The California Highway Patrol shut State Route 168 to only allow access for emergency responders and evacuees.

“Once the fire gets going, it creates its own weather, adding wind to increase the spread,” Tune said.

Cal Fire (California Department of Forestry and Fire Protection) said nearly 12,500 firefighters were battling 22 major fires in the state that have been spurred on by hot temperatures and dry weather.

California has seen 900 wildfires since Aug. 15, many of them started by an intense series of thousands of lightning strikes. The blazes have burned more than 1.5 million acres (2,343 square miles). There have been eight fire deaths and nearly 3,300 structures destroyed.