‘Call that a blimp?’ Social media mocks Baby Trump balloon which was taken down after just two hours

A much vaunted baby Trump blimp which flew above Parliament ahead of thousands of protesters marching through the capital has been labelled a damp squib by social media.

Anti-Trump protesters stirred controversy with the 20ft high inflatable caricature, which depicted the leader as an angry infant wearing a nappy and clutching a mobile phone and floated among statues of revered world leaders including Mahatma Gandhi and Nelson Mandela.

While the president did not personally witness the blimp’s ascent, he did say it had made him ‘feel unwelcome’ in London.

A few hundred people gathered to watch the blimp launch in Parliament Square, with organisers of the stunt wearing red boiler suits and red baseball caps emblazoned with ‘TRUMP BABYSITTER’. 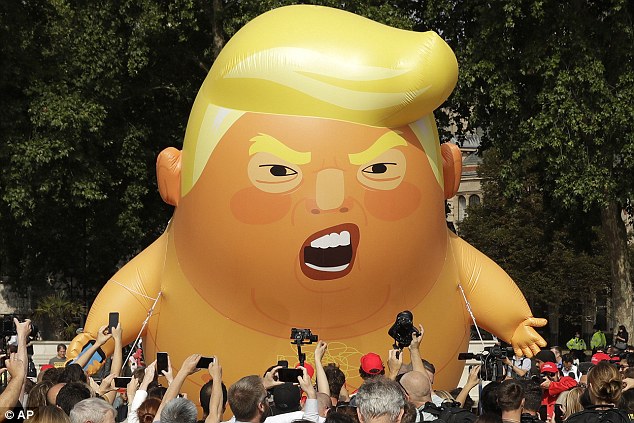 The blimp was swiftly ridiculed on social media, as some called it ‘rubbish’ and others said they would shoot it down 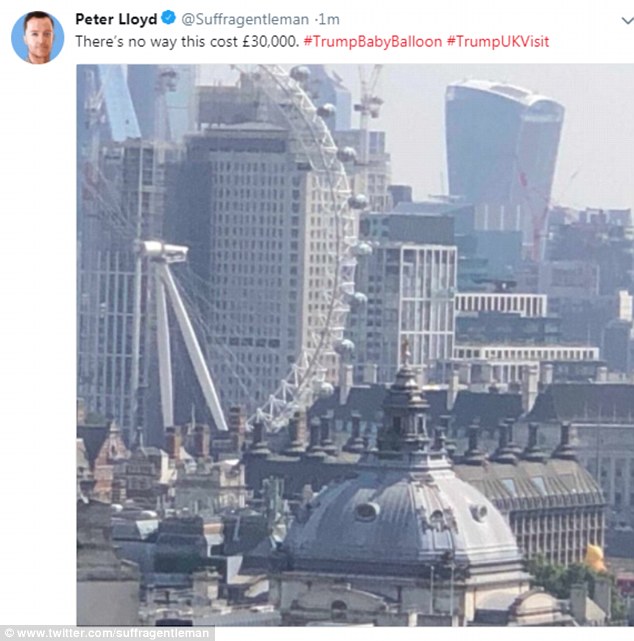 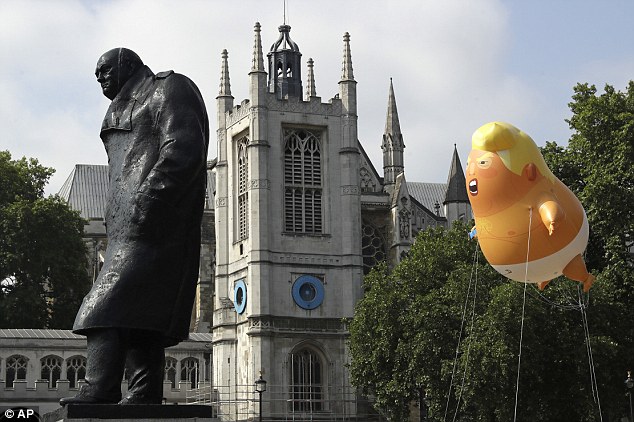 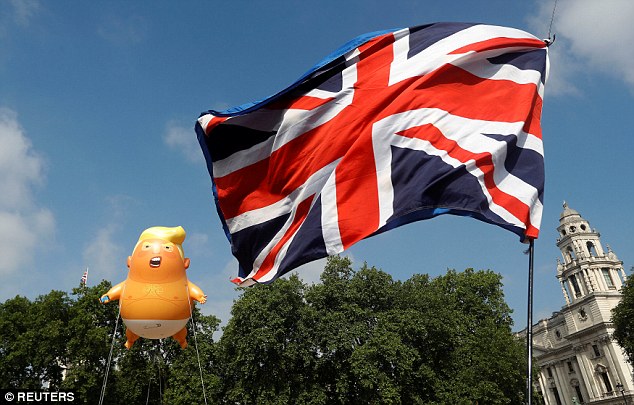 As the President woke up in the UK, the blimp soared in the skies above Parliament Square beside a Union Jack flag

After counting down from 10 to 1 a cheer went up as the large balloon rose to fly around 10 metres off the ground, next to parliament and the River Thames.

After the blimp went up, protesters took to the streets to denounce Trump’s UK visit for stoking ‘division along fault lines of fear and hatred’.

Brett Kirchner, 25, from North Carolina, said: ‘As an American, I think it’s great. It’s a peaceful way of protesting and there are a lot of people who agree with it.

‘Back home in the States, there will be some who are very upset about this protest and who think it’s insulting. I have been asked to send photos back though, not everyone likes Trump.’ 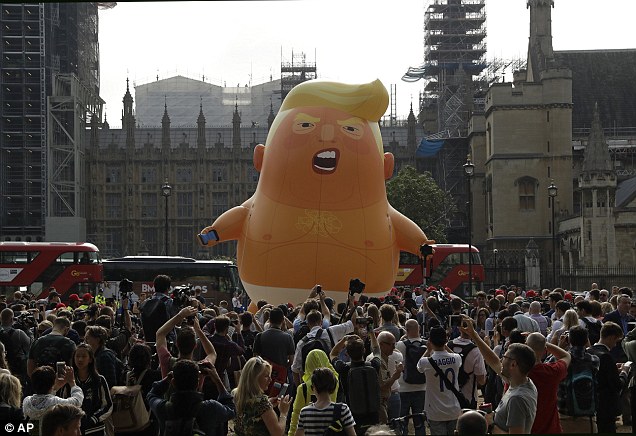 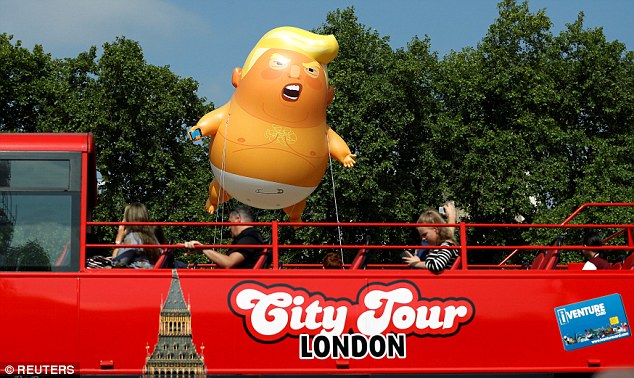 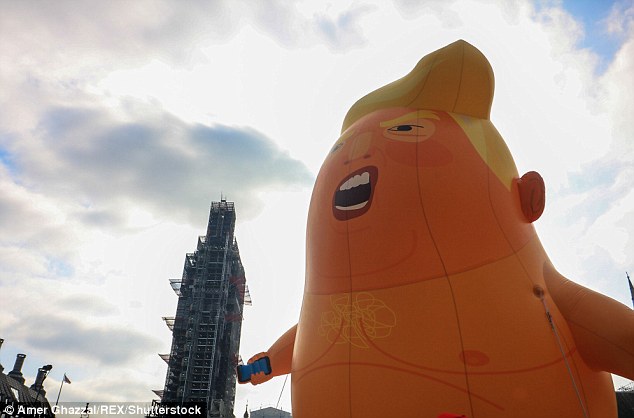 After counting down from 10 to 1 a cheer went up as the large balloon rose to fly around 10 metres off the ground, next to parliament and the River Thames 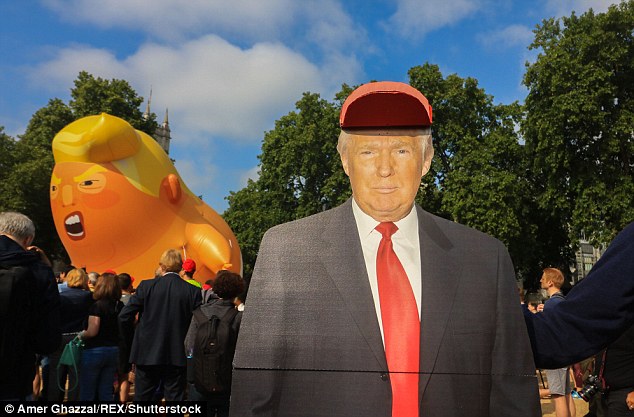 A few hundred people gathered to watch the blimp launch in Parliament Square, with organisers of the stunt wearing red boiler suits and red baseball caps emblazoned with ‘TRUMP BABYSITTER’

Speaking in Parliament Square, Jason Caines, 50, from Pimlico, central London, said of the Blimp: ‘It’s good. It needs to be done because he’s a bigot and a racist. He shouldn’t be president, it should have been Hillary Clinton.’

Brian Bass, 48, originally from California, who now lives in Muswell Hill, north London, added: ‘I’m just enjoying the spectacle of the blimp. I’m very excited to see people this upset on this side of the pond. It’s great that Trump is now in a country where there’s proper freedom of speech. He’s been hiding in countries where they can’t protest.’

Paul Fonseca, 23, who is originally from Mexico but now lives in Camden, north London, said: ‘I think it’s hilarious. It’s an accurate representation of his politics which are so immature. He never enters into adult discussion.’ 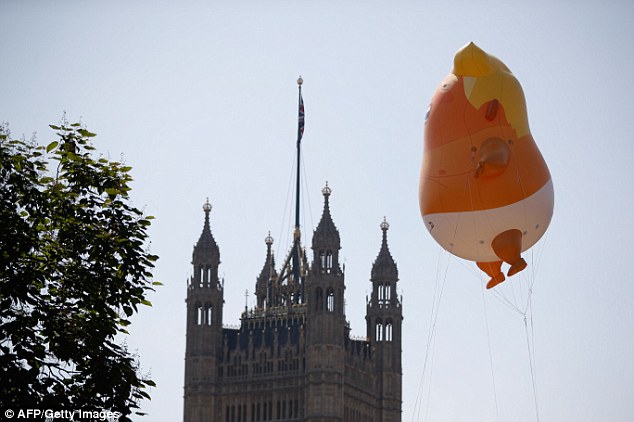 London Mayor Sadiq Khan, who was criticised by Trump in the Sun interview for failing to control crime and prevent militant attacks, gave his blessing for the blimp to be flown and rejected suggestions this showed a lack of respect to the U.S. president.

‘The idea that we restrict freedom of speech, the right to assemble, the right to protest because somebody might be offended is a slippery slope,’ he told BBC radio, adding that a protest to welcome Trump was also planned.

‘We have a rich history in this country of having a sense of humour as well.’ 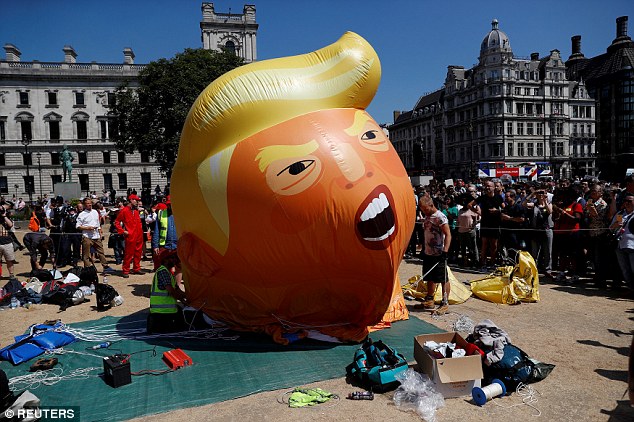 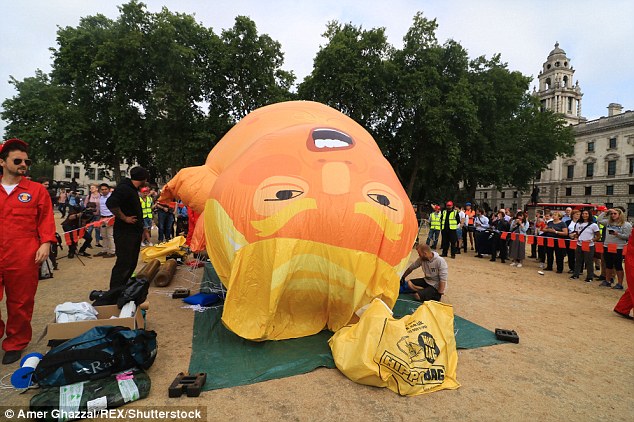 ‘Call that a blimp?’ Social media ridiculed the ‘pathetic’ baby Trump protest balloon which came down after just two hours

Although he may not be a fan of the blimp, it looks like it’ll be following him as he ventures to Scotland later this week.

Protesters are planning to transport the balloon to Scotland overnight to fly it at Trump’s Turnberry golf course, where he is set to play on Saturday, according to The Hill.

Police Scotland says, however, that protesters are not allowed to fly the balloon at the estate during the president’s visit.

Other social media users were less than supportive of the blimp

‘Clearly there is a significant protection operation in place for the president and this includes restrictions to the airspace in the Turnberry area.

‘We need to ensure there is a balance between protection and public safety and the public’s right to peacefully protest,’ Assistant Chief Constable Mark Williams said.

‘With that in mind and on this occasion we are unable to grant permission for the balloon to fly in that area, however we are in discussion with the applicants about possible alternatives,’ he added.