Patrols by protective services officers at Melbourne train stations must return to pre-pandemic numbers, the Victorian opposition says, in a bid to give office workers more confidence to return to the CBD.

Opposition police spokesman David Southwick said that as well as coinciding with Monday’s shift up to 75 per cent office capacity, redirecting PSOs back onto public transport on evenings and weekends would help revive the number of revellers supporting Melbourne’s nightlife. 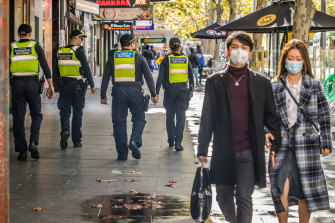 A resource strain has prevented protective services officers from returning to their former patrol numbers.Credit:Jason South

Before the coronavirus pandemic, PSOs guarded all 212 metropolitan train stations plus four regional sites from 6pm until the last train.

That number has since dropped to 93 metropolitan stations.

Coronavirus-related assignments continue to stretch Victoria’s police force: about 300 of the state’s 1473 PSOs plus 500 police officers are working in the hotel quarantine program. And police stations across Melbourne have shortened their opening hours due to the resource pinch.

Mr Southwick said while it was reasonable for the state government to take some PSOs off train stations when commuter numbers plummeted during last year’s lockdowns, Victorians now “deserve full coverage across the public transport network”.

“With staff returning to work and Melbourne’s CBD open for business, it’s time to get our PSOs back on platforms in the community,” he said. 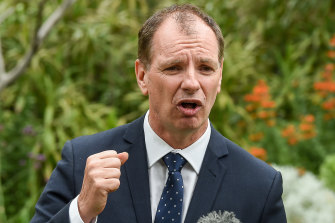 ″Melbourne’s vibrant nightlife won’t return if the safety of commuters remains in the hands of a lucky dip.”

Asked whether some PSOs could be released from hotel quarantine duties to return to the public transport system, a state government spokeswoman said Victoria Police would decide on “the most appropriate operational decisions on the deployment of PSOs to ensure community safety”.

With the shift up to 75 per cent capacity in offices on Monday, more pedestrians passed through Flinders Street Station during the morning peak than on any other Monday since the pandemic started.

Foot traffic sensors detected 1184 commuters between 8am and 9am. It was the busiest Monday morning since March 16 last year, though it was still significantly below the nearly 3000 people recorded on that day.

A Victoria Police spokeswoman said the force was balancing the government’s hotel quarantine request “while maintaining a visible presence across the public transport network”.

“We have a list of stations available on our website where people can check if a station has a permanent or mobile PSO presence, including the night network,” she said.