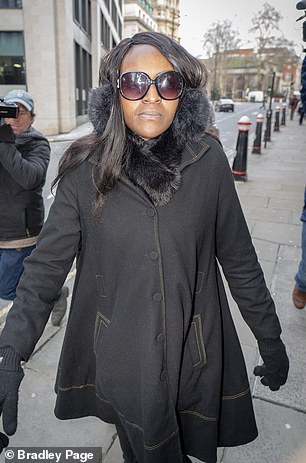 Fiona Onasanya continues to draw her £77,000 MPs salary in prison after refusing to stand down despite being jailed for lying to police over a speeding fine

A former minister has called for a rule-change to strip jailed MPs of their seats following disgraced Fiona Onasanya’s refusal to stand down.

Onasanya, who has been expelled by the Labour Party, was jailed for lying to police over a speeding offence – but continues to claim her MPs wage from her prison cell.

Conservative former minister Sir Mike Penning pressed the Government to act as he warned Peterborough MP Onasanya was bringing the House of Commons into ‘disrepute’ by continuing in her role despite a three-month jail term.

Commons Leader Andrea Leadsom also said Onasanya should stand down and allow her replacement to be selected.

Parliamentary rules require the removal of an MP who is jailed for 12 months or more.

A lesser sentence can result in a recall petition, which can force a by-election if it is signed by more than 10% of the electorate in the constituency.

Onasanya, 35, was found guilty of perverting the course of justice by claiming someone else was driving her car on July 24 2017. She is appealing against her conviction. Her brother Festus Onasanya received 10 months in prison after he pleaded guilty to three similar offences. 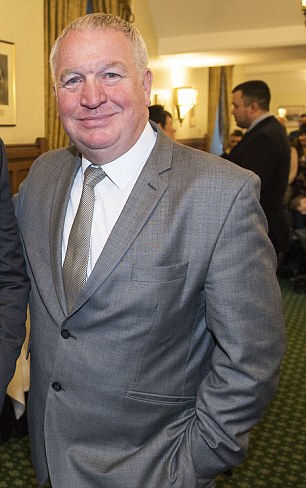 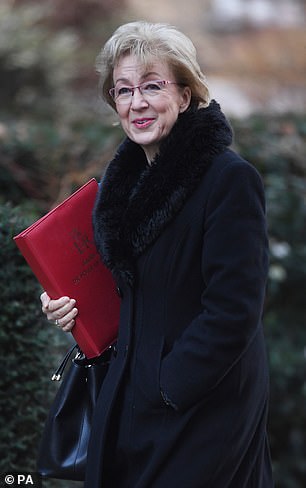 Sir Mike Penning today said rules should be changed so that jailed MPs are automatically stripped of their parliamentary seats. Andrea Leadsom called for Onasanya to stand down

Speaking in the Commons today, Sir Mike Penning said: ‘There is one issue that is bringing this House into disrepute today and that is a member of this House is in prison and continues be an MP.

‘My constituents and other constituents around the country do not understand how anybody can be convicted of a crime and still be a member of this House and be in prison.

‘So can we have a debate… to actually change the law that allows the public to believe what we do is right and if you go to prison you shouldn’t be in this House.’

‘In the case, however, of a criminal conviction the recall condition will not be met unless the appeal period expires without the conviction, sentence or order having been overturned on appeal.

‘So what that means in layman’s terms is that until all appeals are finalised, the recall petition will not be triggered.

‘So I do agree with (Sir Mike) that it’d be right for that member to stand down and allow her local residents to choose a new member of Parliament.’