Some of the young cows, who are exported to Europe for veal, were kicked so hard they collapsed.

The footage, which was revealed by activists from the Eyes on Animals and French L214 groups, was filmed during an investigation into the treatment of live exports.

It is the first time such savage brutality and illegal violence towards animals sent to Europe has been filmed by hidden cameras.

The footage reveals a worker at the farming centre near Cherbourg repeatedly and needlessly beating calves on their faces with a rod, hearing the sound of the impact echo.

One of the workers grabs a calf on its head before yanking it onto its back, beating it and then shoving it back into place again.

But in one of the most horrific clips, the employee yanks a calf onto the floor before bouncing on it like a trampoline.

Another distressing scene shows one of the animal’s limp hind legs spread out as it drags them behind.

Veal calves are typically slaughtered at 16 to 18 weeks of age, according to MSPCA.

Ireland has increased the number of calves it sends to the EU, with the figure now standing at 160,000 a year. 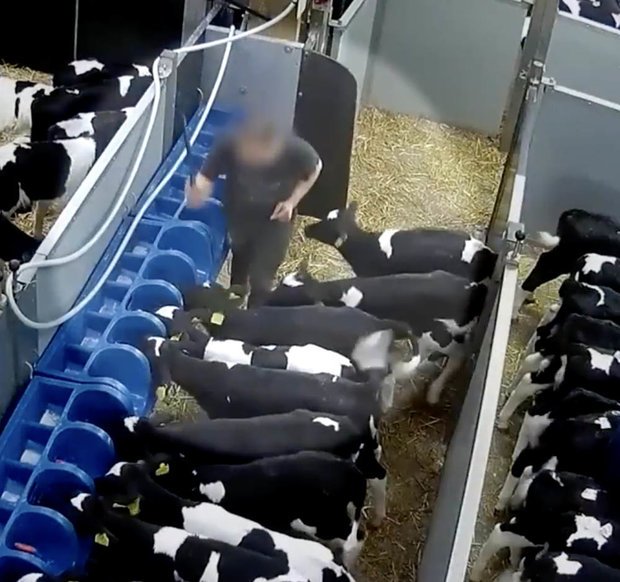 The witnesses, who followed 23 lorry-loads of animals last month, said calves were routinely transported over the maximum journey time of 19 hours, on lorries with inadequate drinking systems.

Nicola Glen, of Eyes on Animals, said: “The calves were suffering stomach upsets, especially diarrhoea, and were already very weak, suffering exhaustion, lack of feed, lack of water and lack of rest due to overcrowding.”

Northern Ireland exports an estimated 25 per cent of male dairy calves to veal facilities, mostly in the Netherlands.

French authorities have approved extra capacity of 400 animals at Cherbourg, bringing the official capacity to 1,200 a week.

L214 and Eyes on Animals are lobbying the EU to ban all transport of unweaned animals.

Back in February, MEPs voted for maximum journeys of one-and-a-half hours for unweaned animals.

It comes after a dog was skinned alive by thugs. Dramatic moment before camper, 72, is gored and thrown 15ft in air by bison after trying to pose for pics with beast – The Sun
Sport