The shocking moment a man rides a VERY strange vehicle down a public road – so can you tell what it is?

This is the moment an unlikely vehicle was spotted jetting down a busy road.

A gobsmacked driver captured the vehicle gliding down the street – but can you guess what it is?

Since being uploaded to Dash Cam Owners Australia, the video has since made some serious waves online.

The driver, dressed in protective leather and a helmet, appeared to be sticking with the flow of traffic.

Surprisingly, this hasn’t been the first time a jet-ski has been captured on the road.

In a video uploaded to News 4 Jax in Jacksonville, Florida, on September 18, a car can be seen pulling up next to the motorised jet-ski. 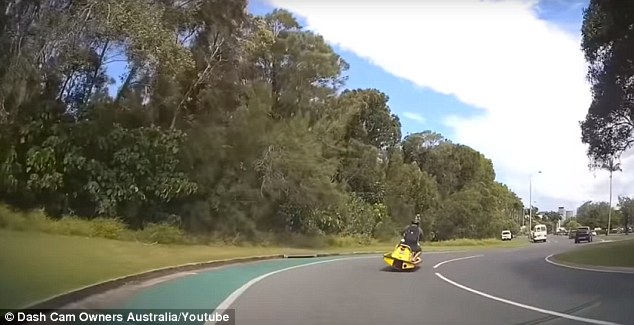 The driver can also been seen wearing a helmet for safety and completing his look with a pair of fluorescent and reflective sunglasses.

The driver gave a casual thumbs up as the car passed him.

A child in the backseat of the car can be heard ‘that’s meant to be in the water’.

Witnesses were left scratching their heads as they saw a yellow jet-ski manouvre around a busy roundabout.

In another video uploaded to ViralHog, a teen is seen taking his new toy for a spin down his driveway.

‘We built it because I woke up one day thinking about such a thing and I decided it had to happen’ the driver wrote.

As it currently stands, there are no laws that restrict drivers to use jet-skis on Australian roads.

However, pocket bikes, motorised scooters and golf carts are banned. 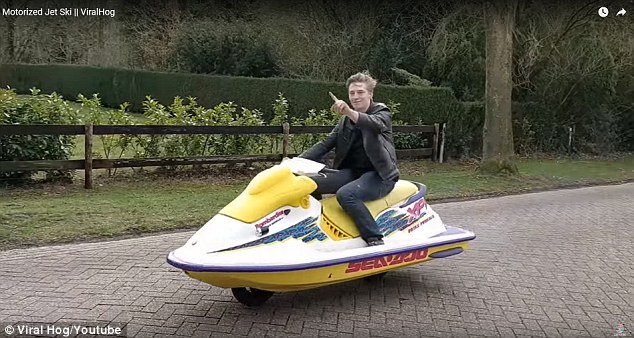