Canada approves the Moderna vaccine, paving the way for inoculations in its vast Far North.

Canada’s regulator approved Moderna’s vaccine on Wednesday, a move that will make it easier to inoculate people in the country’s remote and northern regions.

Health Canada, which conducted a full review process but on an accelerated schedule, said that the vaccine can be used only on patients 18 and older until further testing on children is completed and analyzed. 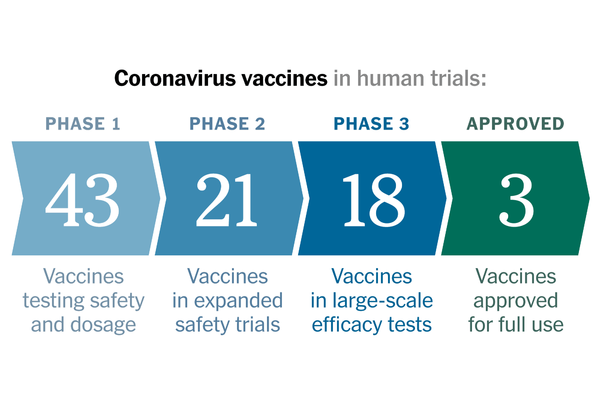 A look at all the vaccines that have reached trials in humans.

The Canadian government had previously decided that the extremely low temperature shipping and storage requirements of the vaccine developed by Pfizer and BioNTech, which is currently being dispensed, made it impractical for use in the country’s vast but sparsely populated Far North. Officials said earlier that the initial doses of the Moderna vaccine would be reserved for that region.

Prime Minister Justin Trudeau has said that deliveries of the Moderna vaccine would begin within 48 hours of approval and that 168,000 doses would arrive before the end of the month.

In other vaccination news:

Dubai will start inoculating people at no cost on Wednesday, using the coronavirus vaccine made by Pfizer and BioNTech, Reuters reported. Saudi Arabia is the only other Arab country using the Pfizer vaccine, but the United Arab Emirates and Bahrain have rolled out a vaccine to the general public developed by China National Pharmaceutical Group, or Sinopharm. A message on the Dubai Health Authority’s hotline said the first phase of the vaccine would be for citizens and Dubai residents ages 60 and over, as well as for individuals with chronic illness.

A 90-year-old woman living in a retirement home received the first coronavirus inoculation in Switzerland on Wednesday, kicking off the start to the mass vaccination campaign on the European mainland. Swiss regulators approved the Pfizer-BioNTech vaccine last weekend, and the first 107,000 doses from an order of three million arrived on Tuesday. The Moderna and AstraZeneca vaccines are still under review.