‘Trump WILL back down’: Defiant Canadian finance boss insists US will backtrack on steel tariffs after Trudeau responded with $12.8billion penalty and G7 nations and industry groups blasted the duties

Canada’s finance minister has said that he believes the threat of retaliation against US trade measures will persuade President Donald Trump to back away from steel and aluminum tariffs, as the other G7 finance ministers delivered harsh words about the US policy and vowed reprisal.

Canadian Finance Minister Bill Morneau spoke on Friday at a meeting of finance ministers from the G7 in Whistler, British Columbia, saying the threat of retaliatory measures could work against Trump.

‘We see that response as being a way to get us back to the table so the impacts actually don’t happen,’ Morneau said.

Morneau was hosting finance ministers and central bankers from the G7 group of rich nations at the mountain resort town ahead of the main summit next week, but fears of a trade war dominated the event. 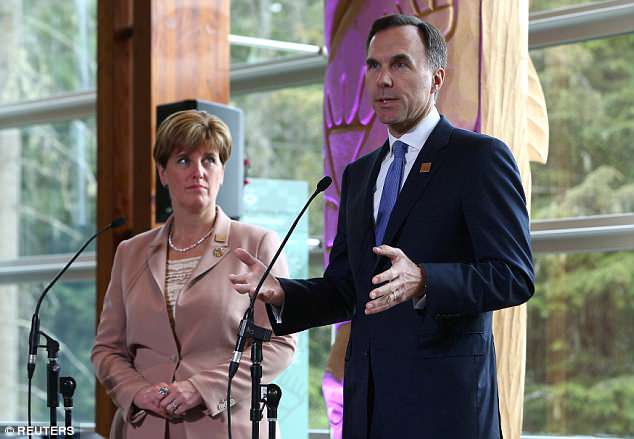 Finance Minister Bill Morneau (right) spoke on Friday at a meeting of finance ministers from the G7 in Whistler, British Columbia, saying the threat of retaliation could work against Trump 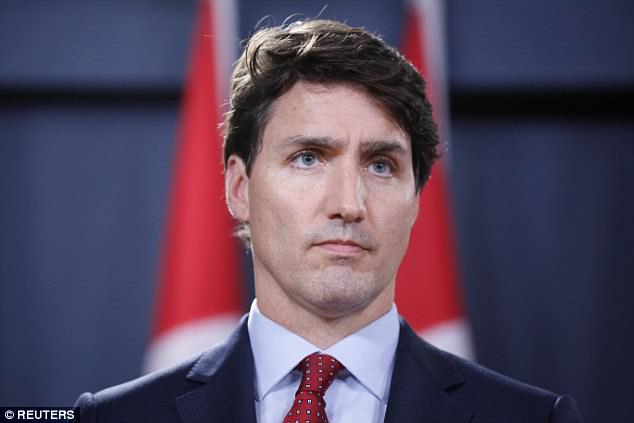 Canadian Prime Minister Justin Trudeau on Thursday announced retaliatory tariffs of $12.8billion on a wide variety of US imports including metal, toilet paper and pizzas Delegates listen to a welcome ceremony during the G7 Development Ministers meeting at the G7 Summit in Whistler, British Columbia, Canada on Thursday

Canada’s retaliatory tariffs don’t go into effect until July, which in theory leaves plenty of time for Trump to reconsider his position.

Trudeau on Thursday made an emotional appeal, citing Canada’s war dead who fought alongside America in WWII and Afghanistan, while taking a swipe at Trump.

‘Americans remain our partners, friends, and allies,’ Trudeau said. ‘This is not about the American people. We have to believe that at some point their common sense will prevail. But we see no sign of that in this action today by the US administration.’

Canada is America’s largest source of imported steel, accounting for about 17 per cent of US steel imports by volume.

However, some critics accuse Canada of buying cheap Chinese steel and flipping it in the US for a profit, using NAFTA as a backdoor for China to avoid US anti-dumping regulations.

Australia negotiated a side agreement with the US and will continue to be exempt from the tariffs, as will Argentina and Brazil. Trump has said the tariffs are necessary to preserve a US steel and aluminum manufacturing base, asserting that it is in the country’s vital national security interests 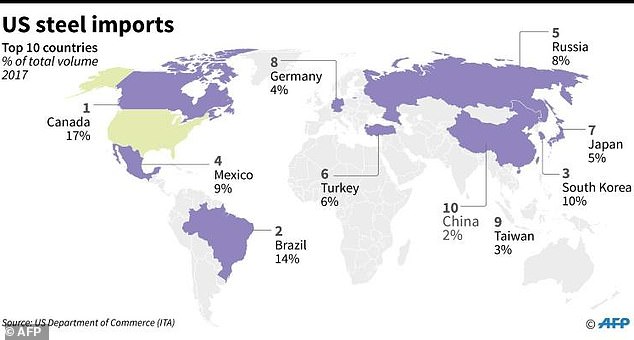 This map shows the top 10 countries that export steel to the US, and their share of the total

Trump has said the tariffs are necessary to preserve a US steel and aluminum manufacturing base, asserting that maintaining some domestic capacity is in the country’s vital national security interests.

Canada’s Morneau told reporters that in a meeting with US Treasury Secretary Steve Mnuchin, ‘I expressed in strong terms our opposition to these tariffs in the steel and aluminum sector, our absolute view that this is absurd that Canada could in any way be a security risk.’

He said the focus now is to use the threat of retaliatory measures to pressure the US into reconsidering its own tariffs before any negative economic impact actually materializes.

The EU is also planning a tariff counter-strike and filed a request Friday for consultations with the World Trade Organization. 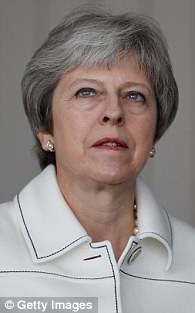 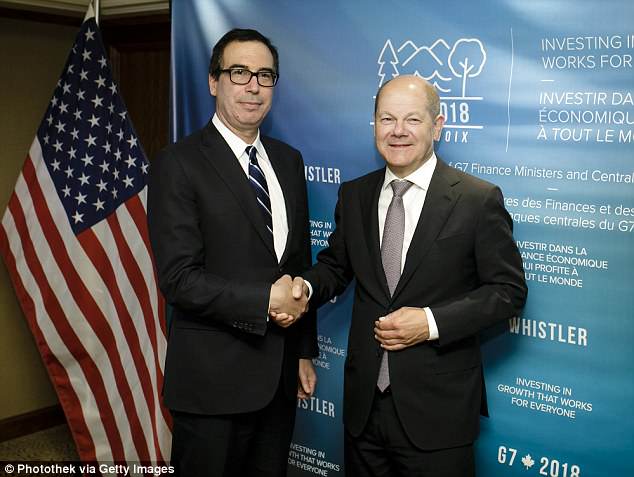 German Finance Minister Olaf Scholz is seen with Steve Mnuchin on Thursday. Scholz reiterated that he viewed the US tariffs as ‘unacceptable’ and ‘against the law’ 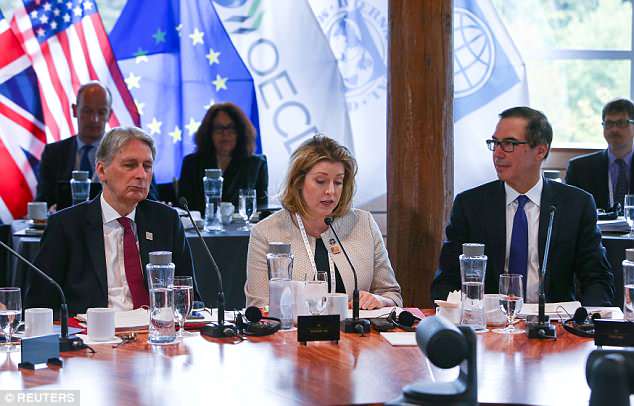 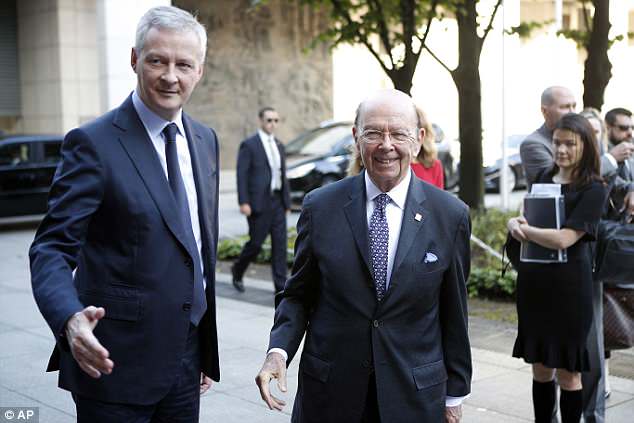 French Finance Minister Bruno Le Maire, left, welcomes US Secretary of Commerce Wilbur Ross prior to their meeting at French Economy Ministry in Paris on Thursday. ‘We have been attacked by those tariffs. We do not have any other choice but to respond,’ Le Maire said

German Finance Minister Olaf Scholz said on Friday in Whistler: ‘We must find a way to get out of this. That was said clearly by everyone and I think it was even taken on board (by the United States).’

‘To that extent, we have laid a foundation to come to a better outcome at some point,’ he added.

Scholz reiterated that he viewed the US tariffs as ‘unacceptable’ and ‘against the law’.

‘On trade, this is a G6 plus one,’ Le Maire said after stepping outside briefly from the talks in Whistler on Friday. ‘We have been attacked by those tariffs. We do not have any other choice but to respond. We would have preferred not to take that kind of decision.’

Le Maire said US Treasury Secretary Steven Mnuchin wasn’t surprised when confronted about the tariffs inside the talks.

The French official expressed hope that the discussion will lay the foundation for successful talks during next week’s summit of G7 national leaders in Quebec’s Charlevoix region.

‘We think that the G7 (meetings) will be useful if at the end of the G7, the United States is aware of the possible negative consequences of their decision on the unity of the G7 – not only the economic unity, but also the political one,’ Le Maire said. 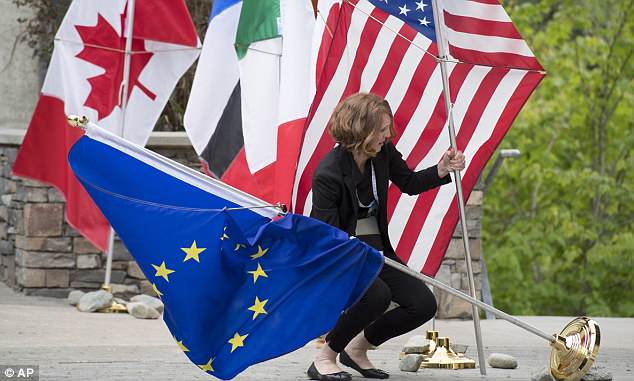 A staffer tries to secure the flags blowing in the wind during a meeting for the G7 Finance and Central Bank Governors in Whistler, British Columbia on Thursday

British Prime Minister Theresa May has said she was ‘deeply disappointed at the unjustified decision’ to apply the tariffs.

‘It worries all of us and we are very disappointed by the action that the United States has taken,’ Hammond told reporters

Hammond said that he hoped that Friday’s discussions could lay the groundwork for G7 leaders to reach an understanding with Trump on tariffs next week at the G7 summit in Charlevoix, Quebec.

‘We know that the president has a very personal style,’ Hammond said. ‘He likes to deal personally with issues.’

The EU and Canada have both filed challenges with the World Trade Organization.

US business leaders, especially in industries that rely upon cheap steel, also spoke out against the tariffs.

The American Automotive Policy Council, which represents US automakers, slammed the tariffs saying they ‘undermine the global competitiveness of the US auto industry and invites retaliation from our trading partners.’

In a statement, the US Chamber of Commerce said ‘the current approach—and the obvious retaliation that will occur in response—poses a serious risk of raising barriers and reducing Americans’ access to vital global markets. Our businesses will lose customers, workers will lose jobs, and American consumers will lose family income through higher taxes and higher prices.’