Care worker, 22, who left dementia-hit woman, 87, lying on floor for two days with just a folded-up slipper for a pillow is spared jail 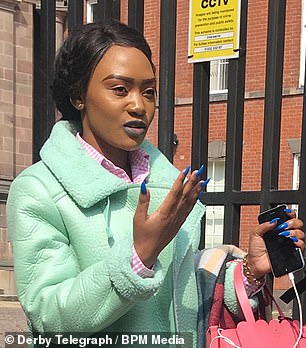 Care worker Lena Hakurotwi, 22, (seen outside South Derbyshire Magistrates’ Court yesterday) admitted she failed to let her employer know she could not move the woman onto her bed

A care worker who left an 87-year-old woman with dementia lying on the ground for two days with just a folded-up slipper as a pillow has been spared jail.

The woman was found ‘shaking and cold’ on the bedroom floor of her house in Normanton and could have died there if her granddaughter had not come to check, according to a judge.

Care worker Lena Hakurotwi, 22, who worked for Nationwide Care Services at the time of the offence in December 2017, admitted she failed to let her employer know she could not move the victim onto her bed.

She received five days training before shadowing a more experienced colleague for 20 hours before being allowed to go on her own home visits to clients alone, including the victim.

Mr Bettany said in December of that year ‘it became apparent something was very wrong’ with the woman.

He said: ‘She was to be visited three times a day but on December 10 the client’s granddaughter went to the address and found her lying on her bedroom floor between the bed and a wardrobe. She had a folded slipped as a pillow.

‘She called 999. She was shaking, a paramedic arrived and said she was borderline hypothermia.’

The victim was treated in hospital. Hakurotwi was interviewed and admitted two days before she first found the client sitting on the floor with her back against a chair trying to climb into her bed.

She said on subsequent visits she ensured she had food, something to drink and was made comfortable.

Mr Bettany said: ‘She was asked why she had not followed the procedures she had been taught and she said when faced with the situation she just panicked.’

Speaking to the court, the victim’s daughter said she was ‘relieved it’s all over’.

‘It has taken a very long time to get to this point,’ she said. ‘How the carer could have left my mum in that situation for so long fills me with rage.

‘I still can’t bear to think of my tiny mum lying on the cold floor overnight.

‘As far as the suspended sentence goes, I still can’t imagine that many people would need much training to seek assistance for a frail elderly person who has clearly fallen onto the floor. A five-year-old would have called 999.

‘To visit three times and not seek help, leaving food out of reach, is intentionally cruel and spiteful in my eyes, trained or not.’

The daughter asked why the carer couldn’t have at least given her mother a blanket.

She added: ‘My mother was completely helpless in that situation and it breaks my heart that she was cold and afraid for so long and couldn’t call us.

‘I have no doubt in my mind that if she had left my mother on the floor for a second night she would most certainly have died there.’

‘A vulnerable person has been extremely badly let down,’ he said. ‘She was suffering hypothermia and if the situation carried on she could have died.

‘It did not, thankfully, as the granddaughter arrived and called 999 which is what you should have done two days earlier.

‘What you did not do was ask for help and you should have done.

‘I am satisfied your employers should have done a lot more before letting you out on your own. They gave you a free rein without the proper training.’ 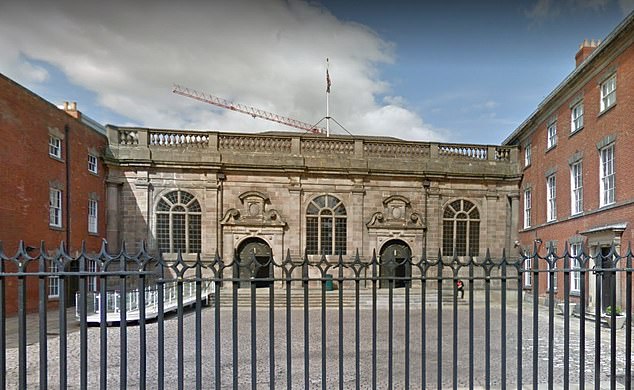 Hakurotwi was handed a 26-week jail term at the court, (pictured) suspended for a year, and was ordered to carry out 200 hours unpaid work

But Nationwide hit back, claiming it had spilt ‘blood, sweat and tears’ to ensure it is had reached high care standards.

Director Hamait Ali said the company was rated ‘inadequate’ by the Care Quality Commission (CQC) 18 months ago but has been since rated as ‘good’.

‘I don’t accept the judge’s criticism of our service and training at all,’ he said.

‘I don’t understand what the judge has said here because as a result of this case we passed both CQC and police scrutiny and we are now recognised as a good provider.

‘We provide full training and assisted coaching in the community and if that is deemed by the judge to be inadequate then there is a problem with every single care provider in the UK.

‘We have spent more than £150,000 and staff have spilled blood, sweat and tears to make us a good provider.’

Hakurotwi, who was studying international business at university, pleaded guilty to one count of wilful neglect of an individual.

She was handed a 26-week jail term, suspended for a year, and was ordered to carry out 200 hours unpaid work.

Judge Meachin also handed her a six-week curfew confining her to her home address at The Oval, Wakefield, each night between 8pm and 8am.

Mr Close said: ‘There was nothing malicious or evil in what she did. It was a case of failure to act.’