Hong Kong: Chief Executive Carrie Lam has warned that resolving the ongoing siege at Polytechnic University is necessary to demonstrate that the Hong Kong government and police remain capable of handling the city's crisis without Chinese military intervention.

Of 600 protesters who left the campus on Tuesday, 200 were aged under 18 years and accompanied by teachers sent in to help.

Lam said she had asked her new police commissioner, Tang Ping-keung, to take a "more humanitarian" approach to end the siege, which has continued since Sunday when riot police stormed the university entrance with rubber bullets and tear gas.

Large explosions have continued in the building, which contains large amounts of petrol and gas bombs. 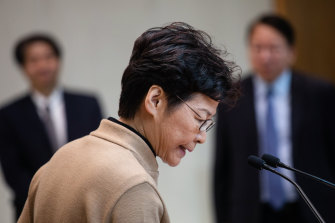 Carrie Lam said she wanted to demonstrate that Hong Kong was capable of handling the crisis without Beijing’s assistance.Credit:Bloomberg

Lam said minors would be allowed to leave the campus immediately, without arrest by police, and the injured would be taken directly to hospital.

Police would record their details for prosecution but they wouldn't be detained. All adults leaving the building would be immediately arrested, she said.

Lam said she remained confident her government didn't need to call in the Chinese military to help with violent protests.

"If we were not able to undertake any operations to arrest these rioters who are resorting to escalating violence and who are damaging Hong Kong from one place to another, from one campus to another, and manufacturing more and more life threatening weapons and petrol bombs… we would not be able to demonstrate and convey that confidence in dealing with the situation," she said.

She said the People's Liberation Army had appeared on the streets on Saturday evening in Kowloon Tong as volunteers to help the community. They had previously cleared up trees in a country park and visited the elderly, she said.

The emergence of the soldiers from their barracks had shocked many Hong Kong residents.

On Tuesday Beijing signalled it may intervene in the independence of Hong Kong's judiciary, a day after the High Court had struck down Lam's controversial mask ban.

China's central government expressed "deep concern" over the ruling by the High Court that the mask ban violated Hong Kong's Basic Law or constitution. It said the ruling had seriously undermined Lam's power.

China's parliament, the National People's Congress, has the power to "interpret" Hong Kong's Basic Law through a standing committee. 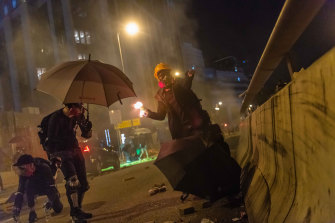 Previous "interpretations" by the NPC Standing Committee have included disqualifying young pro-democracy politicians from parliament for improper oath taking. Such decisions have contributed to growing anger in Hong Kong at what is seen as interference by Beijing and boiled over into street protests this year by a wide section of the community.

On Tuesday the Chinese government appeared to be preparing to make another "interpretation" to overturn the High Court.

A spokesman for the legal commission of the NPC Standing Committee said it was the only body that could judge and decide if laws comply with the Basic Law. 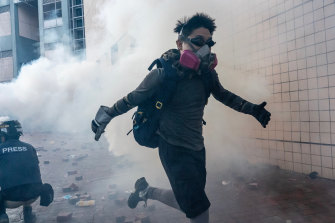 A protester flees through a cloud of tear gas in an attempt to leave Hong Kong’s Polytechnic University this week.Credit:Getty Images

The High Court ruling had "seriously weakened the administrative power of the Chief Executive" and the NPC was considering what action to take.

Chinese state media in recent weeks has criticised Hong Kong's judiciary for siding with protesters, after prominent young activists such as Joshua Wong were released on bail.

Legislative Councillor for the technology sector, Charles Mok, said the statement on Tuesday from Beijing was a hit to the independence of Hong Kong courts.

Lam has repeatedly pointed to Hong Kong's judicial independence as the way to solve the protest crisis and has urged the community to support police and allow the courts to make their findings.

Her government has also said it may be possible for Lam to pardon protesters found guilty of rioting after they have completed court trials and received judgements.

An amnesty for arrested protesters is one of the five demands of democracy activists.

Protests have become increasingly violent as Lam's government fails to respond to demands about police violence and democratic reforms promised in a handover deal in 1997.

Petrol bombs were thrown on the streets of Kowloon overnight, as the police siege at the Polytechnic university campus continued and mass arrests were made on Monday of anyone caught in the police cordon around the university.