BARCELONA (Reuters) – Catalonia should hold a new vote on independence from Spain within two years, the head of the region’s government said on Thursday in a fresh challenge to Madrid following days of unrest by pro-separatist protesters.

Nearly 100 people were injured across the northeastern region on Wednesday in a third day of violence after Spain’s Supreme Court sentenced nine Catalan leaders to lengthy jail terms over their failed effort to secure independence in 2017 via a referendum that Madrid ruled was illegal.

Cars and rubbish bins were torched in the Catalan capital Barcelona overnight and Interior Minister Fernando Grande-Marlaska said 97 protesters had been arrested since the outbreak of some of the worst violence seen in Spain in years.

With further demonstrations planned, Grande-Marlaska said security reinforcements would be sent in.

On Thursday, thousands of students took to the streets, some of them hurling eggs at police holding riot shields. Protesters from around the region are due to converge on Barcelona on Friday and unions have called a general strike for the day.

Addressing the Catalan parliament, pro-independence regional chief Quim Torra criticized the rioting, saying the separatist cause was a peaceful movement.

But he also pushed the case for forging ahead with the stalled secessionist drive, saying Monday’s sentences would not deter a new vote on independence.

“We’ll return to the ballot box again on self-determination,” he said. “If all parties and groups make it possible, we have to be able to finish this legislative term by validating independence,” he added.

The Constitutional Court warned Catalan officials on Wednesday of legal consequences if they broke the law by pursuing independence.

A source close to Torra said any eventual vote could be a regional election that would be considered a plebiscite on independence – a move that could circumvent Madrid’s refusal to sanction a referendum.

Spain’s main parties have consistently rejected calls for an independence referendum in Catalonia, although the ruling Socialists say they are open to dialogue on other issues.

Catalonia is a semi-autonomous region with some 7.5 million inhabitants, who have their own language, parliament and flag. It is Spain’s wealthiest region. Independence is a highly divisive issue, with a poll in July showing backing for secession in the region at its lowest level in two years, with 48.3% of people against and 44% in favor.

Pro-independence leaders staged their banned referendum in 2017 and then declared they were breaking away from Spain. The Spanish government immediately seized control of the Catalan administration and the ringleaders were put on trial.

The Supreme Court found nine politicians and activists guilty of sedition on Monday and sentenced them to up to 13 years in jail, sparking increasingly violent demonstrations.

“This doesn’t represent the majority of Catalans, whichever side they are on, be they pro-constitution or pro-independence,” said Joan, a 50-year-old small-business owner who declined to give his family name.

In his address to parliament, Torra trod a careful line, acknowledging that he can only move if other parties backed his calls for a renewed secessionist drive.

Torra’s party, Junts per Catalunya (United for Catalonia), rules the region with its allies, the separatist Esquerra Republicana de Catalunya (ERC). But the ERC appeared lukewarm about Torra’s proposal.

“This is not the moment to lay down dates … but rather to achieve consensus,” said Esquerra spokesperson Sergi Sabria. 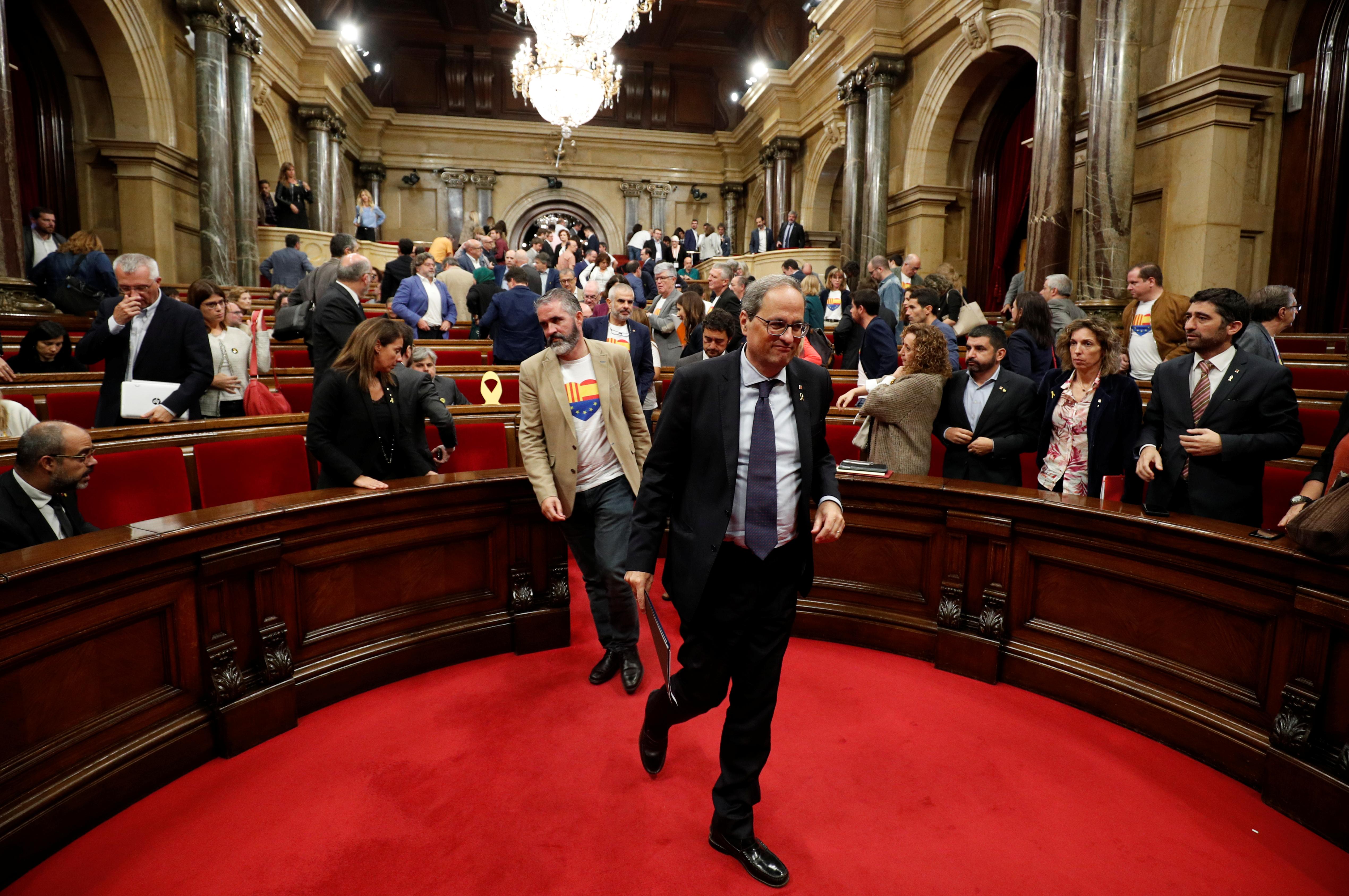 Catalan nationalists began protest marches across the region on Wednesday and have said they will all reach Barcelona on Friday to coincide with the general strike.

Carmaker Seat, a unit of Volkswagen, VOWG_P.de has halted production at its plant in Martorell, near Barcelona, from Thursday afternoon until Saturday, as it expects the planned marches to disrupt traffic, a company spokeswoman said.

The Catalan question has dominated domestic politics in recent years and was instrumental in triggering national parliamentary elections in April.

The Socialists have called a fresh election next month, but a poll released on Thursday suggested parliament would remain split, with neither the left or right set to secure a majority.