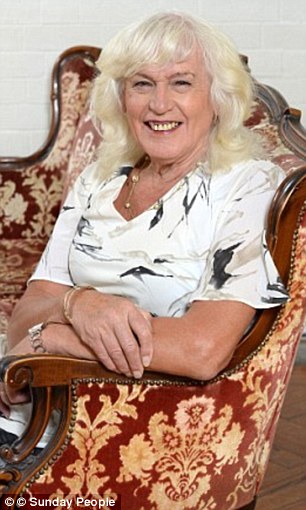 Ruth Rose, 83, became the oldest person in Britain to have gender reassignment surgery in 2014 when she was 81

Elderly people are being given guidance on how to change gender after an 81-year-old ex-RAF navigator became Britain’s oldest transsexual.

Charity Age UK issued advice for pensioners looking to have reassignment surgery after the NHS revealed a rise in the number of over-60s swapping sex.

Ruth Rose, now 83, of Newhaven, East Sussex, underwent the final stage of her gender realignment surgery in 2014 after she started living as a woman four years prior.

She is the oldest in Britain to have the surgery, with her treatments and the operation, which she had on the NHS, costing £4,000.

The NHS Gender Services, which provide specialist assessment and treatment of Gender Dysphoria, are offered to people over 18, and there is no upper limit.

To undergo such major irreversible procedures, NHS guidelines state that patients must be sufficiently physically fit. Their treatment is carried out on a case by case basis, according to their individual needs and situation.

Ms Rose, who had been James – a father of three and grandfather of four – said she had always known she was living in the wrong body, and had started dressing up in secret while at school.

At 18, as James, she embarked on an apprenticeship in mechanical engineering and went on to join the RAF at 23.

People seeking to receive gender reassignment treatment, which usually involves hormone therapy and surgery, on the NHS must first see their GP.

The doctor will then refer them directly to either a gender specialist, gender clinic or local mental health team for assessment.

After at least 12 months of living as a woman and undergoing hormone therapy male-to-female patients are considered eligible for genital surgery.

During this time, patients should present consistently, on a day-to-day basis and across all settings of life, in their desired gender role, including coming out to partners, family, friends, and community members.

There is no requirement for the patient to have commenced a social role transition before a recommendation is made for hormone therapy.

Facial feminisation surgery is not usually funded by the NHS.

Male-to-Female genital surgery typically requires a hospital stay of about a week and a period of recuperation that can vary from a fortnight to two months.

When she married in 1961, Ms Rose felt she could not tell her wife about her feelings, hoping instead that they would go away.

The couple were married for 42 years and had three children, but after they divorced amicably 11 years ago, Ms Rose began to be more open about living as a woman – having previously been living as a man at home, but dressing up to see friends

The new report from Age UK gives advice on how to tell a lifelong partner or spouse that you have been living in the wrong body.

‘Watching what is happening to your loved one as they come to terms with their gender issues can be challenging, whether or not they decide to pursue transition.’

‘You may feel a sense of loss, confusion, anger or hurt. It can affect your sense of who you are. For example if you were a loving wife to a man, do you become the lesbian partner of a woman?’

The report gives advice on financial implications, employment rights and other types of discrimination, including hate crime – but also reminds people of the risks.

‘It can be an opportunity to resolve longstanding conflicts and uncertainties that threaten mental health and wellbeing.

‘There may be fewer social and economic impacts when work or social responsibilities change [in retirement].’

Caroline Abrahams, the charity director at Age UK, told The Sunday Times: ‘Many will have felt the need to conceal or suppress this crucial part of their identity all their lives… it potentially offers these older people the opportunity to be truly themselves at last.

‘The last thing they need now is to be subject to ageism: they are entitled to exactly the same access to advice, information, support and NHS treatment as everyone else.’

Eleven people had gender reassignment surgery in 2015-16, the last year that figures broken down by age are available.