Washington: US President Donald Trump has mocked Greta Thunberg, the Swedish 16-year-old climate activist, calling her distinction as Time magazine's Person of the Year "ridiculous" and suggesting she work on anger-management issues and go to a movie with a friend.

Trump's advice, in a morning tweet, came a day after Thunberg, who has mobilised millions of people to fight climate change and condemned leaders' inaction, became the youngest person to be dubbed Person of the Year by Time. 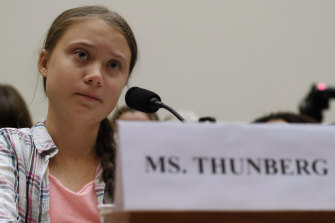 Greta Thunberg was named Time’s Person of the Year for 2019.Credit:AP

"So ridiculous," Trump tweeted. "Greta must work on her Anger Management problem, then go to a good old fashioned movie with a friend! Chill Greta, Chill!"

Trump was responding to a tweet congratulating Thunberg by Roma Downey, an actress and producer from Northern Ireland. Her production credits include the History Channel miniseries, The Bible, which she also starred in as Mary, mother of Jesus.

Thunberg wasted little time in offering a rejoinder. Shortly after his tweet, she had updated her Twitter profile to read: "A teenager working on her anger management problem. Currently chilling and watching a good old fashioned movie with a friend."

Trump, who has called climate change a "hoax," also took note of Thunberg in September, following an appearance at a United Nations climate summit where she offered an impassioned – and somewhat fatalistic – plea to global leaders. 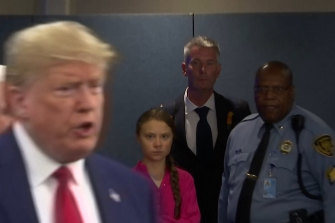 "She seems like a very happy young girl looking forward to a bright and wonderful future. So nice to see!" Trump wrote on Twitter at the time.

Thunberg subsequently embraced Trump's sarcastic description and altered her Twitter profile to describe herself to her followers as "a very happy young girl looking forward to a bright and wonderful future."

It's not the first time Trump has lashed out after not being recognised for his influence. In 2015, Trump attacked German Chancellor Angela Merkel for "ruining Germany" after she was named Person of the Year, when he was listed as a runner- up.

Trump is the second world leader to take aim at Thunberg this week, after her concern over the slayings of indigenous Brazilians in the Amazon drew a harsh rebuke from the Latin American nation's President on Tuesday.

"Greta said that the Indians died because they were defending the Amazon," Jair Bolsonaro said. "It's impressive that the press is giving space to a brat like that," he added, using the Portuguese word "pirralha."

Thunberg responded by changing her bio on Twitter, where she has over 3 million followers, to say "Pirralha."

At her UN appearance in September, Thunberg chastised leaders for praising young activists like herself while failing to deliver on drastic actions needed to avert the worst effects of climate change, and she warned that if the world continued with business as usual, her generation would face an insurmountable catastrophe.

In explaining Time's choice of Thunberg as Person of the Year, the magazine's editor in chief, Edward Felsenthal, said on Wednesday that "she became the biggest voice on the biggest issue facing the planet this year, coming from essentially nowhere to lead a worldwide movement."

Thunberg represents a broader phenomenon of young people pushing for change, Felsenthal said during an appearance on NBC's Today show.

He pointed to the Parkland, Florida, high school students who became a leading voice on gun control, as well as to another finalist for 2019 Person of the Year: the Hong Kong protesters who have spent months in the streets urging democratic reform.