China can shut off the Philippines power grid at will, report warns – highlighting concerns over allowing Beijing to invest in foreign nuclear plants

China could shut off the Philippines’ power grid at will, a report has warned – highlighting fears about Beijing’s role in infrastructure around the world.

A report for Philippine lawmakers found that the country’s national security ‘is completely compromised’ by China’s access to the power grid.

Chinese engineers have exclusive access to parts of the system and could shut it down remotely, the report seen by CNN reveals.

The findings will spark alarm in the West where China is helping to build a new nuclear power station in the UK and has already faced sanctions from the US. 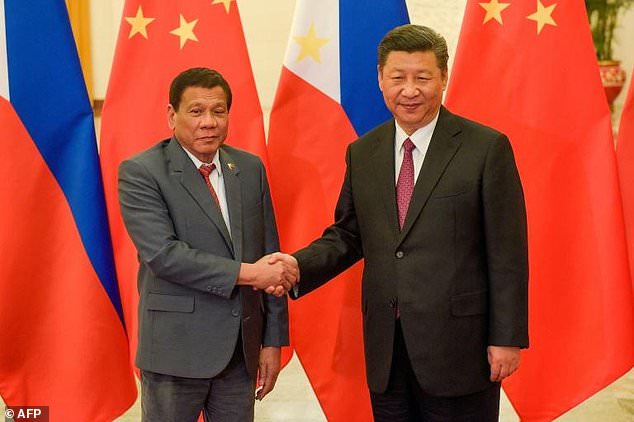 Warning: China could shut off the Philippines’ power grid at will, a report has warned. The two countries’ leaders, Rodrigo Duterte and Xi Jinping, are pictured

Risa Hontiveros warned of a security threat and possible sabotage due to Beijing’s stake in the nation’s only transmission firm.

Chinese engineers could bring about power and internet outages and even interfere in elections if there were no safeguards.

The senator cited confirmation last week from a Philippine power executive that a ‘hostile third party’ had the ability to cause blackouts.

Hontiveros said a country capable of aggression should not have the means to destabilise a neighbour ‘with the flick of a switch’.

‘Imagine a foreign country, which is an unrepentant trespasser and aggressor in our seas and territories, controlling our national electricity grid,’ Hontiveros said in a statement.

‘It could sabotage our elections, shut down our access to television, the internet and other communication technologies, cause the collapse of our economy and undermine our national security,’ she said.

The report warns that ‘our national security is completely compromised due to the control and proprietary access given by the local consortium partner to the Chinese government’.

China has ‘full control’ over the network and ‘full capability to disrupt national power systems’, it says.

Beijing and U.S. ally Manila have a long history of mistrust, despite Philippine President Rodrigo Duterte’s pursuit of warmer ties with China.

Ties were at their worst under the previous administration, when the Philippines infuriated China by seeking international arbitration over the conduct of its coastguard and the military use of of submerged reefs. 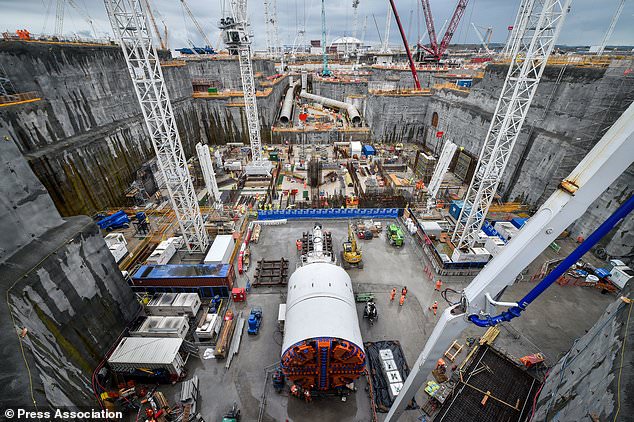 Joint project: In the UK, China is helping to build the Hinkley Point plant in Somerset under a deal agreed in 2016 (work is seen underway earlier this year)

In the UK, China is helping to build the Hinkley Point plant in Somerset under a deal agreed in 2016.

The British government promised measures ‘to enhance security’ when the project was given the go-ahead in 2016.

Since then, Huawei’s possible role in a 5G mobile network has sparked further concerns over Beijing’s role in UK infrastructure.

However, people familiar with the matter told the Financial Times earlier this year that it would be difficult to pull the plug on the project at this stage.

Commitments were given to Chinese leaders by David Cameron’s government in 2014 and the UK requires such projects to be ‘developer-led’, one explained.

‘Having laid out a path for the Chinese to follow, it would have big consequences for the relationship if [Britain] then changed the rules using security as some sort of figleaf,’ one said.

The US earlier this year imposed sanctions on Chinese nuclear firm CGN in August this year citing security concerns.

The company was added to an ‘Entity List’ of firms banned from doing business with US enterprises.

CGN was involved in activities contrary to the national security and foreign policy interests of the United States, Washington alleged.

The Trump administration also put Huawei on a blacklist in May, citing national security concerns.