The pharmaceutical giant announced on Thursday that the vaccine, which is said to be 79 per cent effective, had been approved.

The efficacy rate is based on interim analysis of Phase III clinical trials of the drug, developed by the Beijing Biological Products Institute, a unit of Sinopharm subsidiary China National Biotec Group (CNBG). 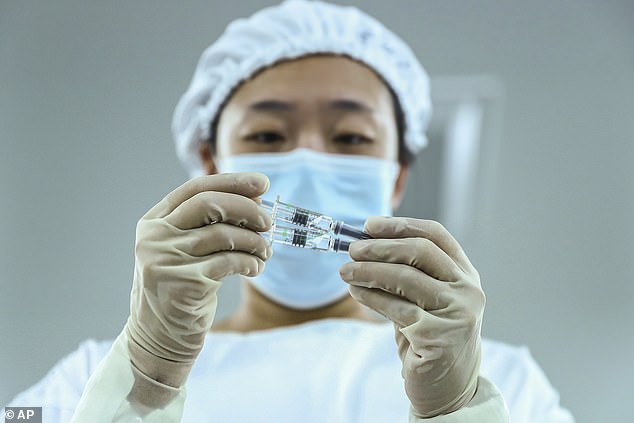 In this photo taken on December 25, 2020, a staff member inspects syringes of COVID-19 inactivated vaccine products at a packaging plant of the Beijing Biological Products Institute

It was reported that China would vaccinate as many as 50 million people from high-priority groups before the Lunar New Year holiday in February.

Zeng Yixin, an official with National Health Commission, told a briefing on Thursday that the price of the vaccine would depend on the scale of use.

However, the ‘premise’ was that it would be free for the public in China.

The efficacy and safety data of China-made vaccines is being closely watched by many developing countries, according to Reuters. 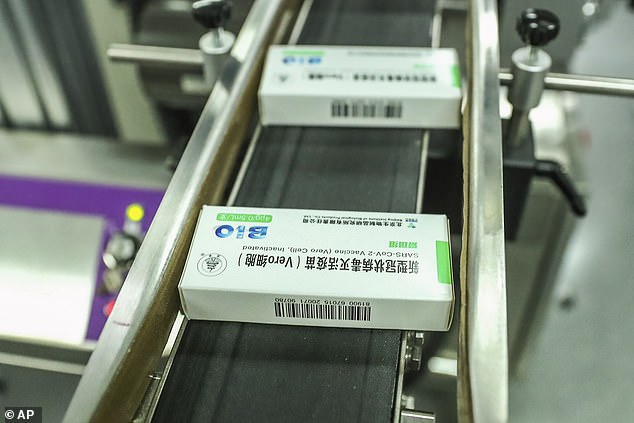 An affiliate of Sinopharm said on Wednesday its COVID-19 vaccine showed 79.34% efficacy

They have limited early access to shots developed by Western drug makers and are looking for alternatives from China and Russia.

‘China’s approval could boost the credibility of the vaccine,’ said Dong-yan Jin, a professor at the University of Hong Kong.

‘But if the vaccine wants to take a share in the global market, especially in developed countries, more data is necessary.’

The same Sinopharm shot announced by the United Arab Emirates on December 9 has an 86 per cent rate based on data.

A spokeswoman declined to explain the discrepancy and said detailed results would be released later, without giving a timeline.

There was then a confusing readout the same day from Brazil, which said the vaccine’s efficacy was between 50% and 90%. 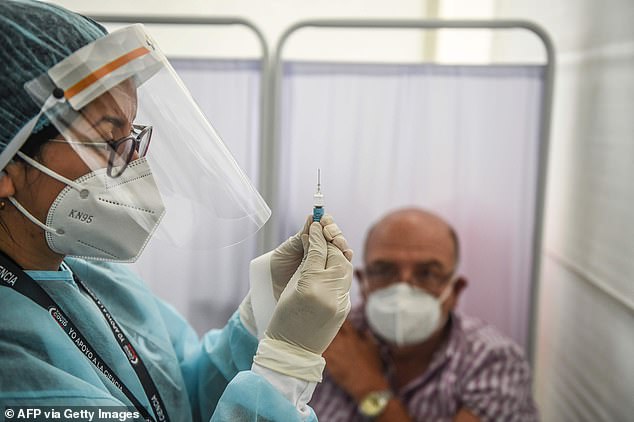 In this file photo taken on December 9, 2020, a health worker prepares a syringe to inoculate a volunteer with a COVID-19 vaccine produced by China’s Sinopharm during its trial at the Clinical Studies Center of the Cayetano Heredia University in Lima, Peru

The efficacy of the China-developed shots trails the more than 90% success rate of rival vaccines from Pfizer Inc and its partner BioNTech SE and Moderna Inc.

It points to progress China has made in the global race to develop successful coronavirus vaccines.

China, whose President Xi Jinping has pledged to make its vaccines a global public good, has won several large supply deals with countries.

These have included Indonesia and Brazil – the most populous countries in Southeast Asia and Latin America respectively. 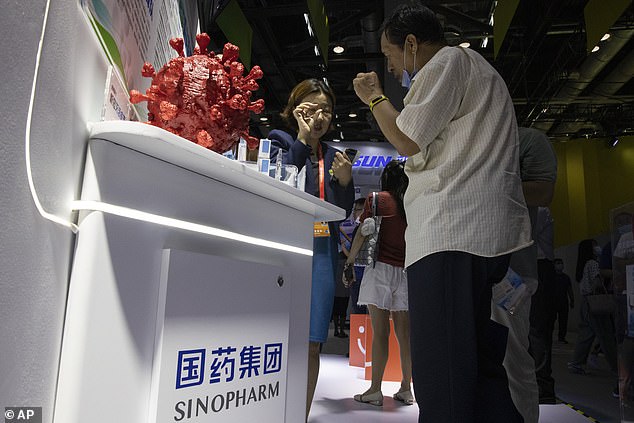 A promoter talks about the COVID-19 vaccine produced by Sinopharm subsidiary CNBG during a trade fair in Beijing on September 6, 2020. The state-run drug maker said that it had applied to the National Medical Products Administration for conditional approval of the vaccine

But none of the Chinese drug makers has yet to release detailed efficacy data.

‘I think it’s very positive news. The results for other COVID vaccines … were also released initially in very short press releases, and within a few weeks more details were provided,’ said Benjamin Cowling, a public health professor at the University of Hong Kong.

Experts warned, however, that it’s still early to conclude how successful the Sinopharm vaccine is.

‘Data can only be interpreted when key details, such as the study design, number of participants, period of observation and number of cases, are described,’ said Ooi Eng Eong, an immunology professor at the National University of Singapore. 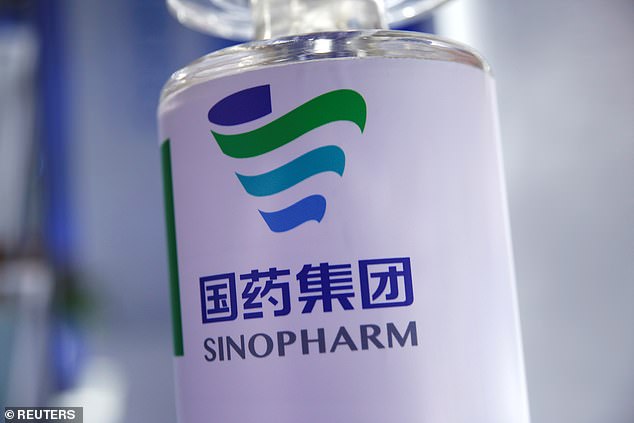 The Sinopharm vaccine is among the five most advanced candidates from China in terms of development.

It has been used in its emergency use programme that has vaccinated hundreds of thousands of people since July.

CNBG has another vaccine in late-stage trials and both have been approved for emergency use in China even as studies have not been completed.

This comes as Britain approved a second COVID-19 vaccine on Wednesday, a shot developed by Oxford University and AstraZeneca.