A Chinese virologist famous for her work on researching coronavirus in bats has said in an interview on Chinese state television that new viruses being discovered are ‘just the top of the iceberg’.

She also called for greater international cooperation in the fight against epidemics, such as we are seeing now with Covid-19.

Shi Zhengli, the deputy director of the Wuhan Institute of Virology also known as China’s ‘bat woman’, said that research undertaken in viruses needs governments and scientists to be transparent with their findings, and cooperative.

She added that it is ‘very regrettable’ when science is politicised.

Speaking to CCTN, Shi told the television network CHTN: ‘If we want to prevent human beings from suffering from the next infectious disease outbreak, we must go in advance to learn of these unknown viruses carried by wild animals in nature and give early warnings.

‘If we don’t study them there will possibly be another outbreak,’ she said.

Shi Zhengli, the deputy director of the Wuhan Institute of Virology also known as China’s ‘bat woman’, has said ‘if we don’t study them there will possibly be another outbreak’

Her interview comes as the National People’s congress, a yearly meeting of China’s top leadership, begins in the capital Beijing

China’s relationship with the US been growing more tense in recent months amid accusations from Trump’s administration that the virus originated from the Wuhan lab, and that the country covered up the initial outbreak.

Both President Trump and his Secretary of State Mike Pompeo have suggested Covid-19 is linked to the Wuhan laboratory. The accusations have been rejected in Beijing, as has Shi.

The virologist has said that the characteristics of the viruses that she has worked with do not match the genetics of the one currently spreading in humans across the globe.

The P4 laboratory in Wuhan, capital of China’s Hubei province, where Shi Zhengli had studied coronavirus in bats since 2004

In a post of social media, she wrote that she would ‘swear on my life’ that the pandemic had nothing to do with the coronavirus pandemic and the virus that was first discovered in December, 2019 in Wuhan.

Wang Yanyi, the director of the Wuhan Institute of Virology has said that the accusations that the virus originated from the lab in Wuhan are ‘pure fabrication’.

Shi Zhengli’s research reportedly started in 2004 to study the SARS outbreak. Since then, she has studied all kinds of bats, and made a breakthrough in 2013 when she found bat feaces 96.2 per cent identical to the SARS COV-2.

She has also reportedly done research on whether or not coronavirus can jump from one species to another, and in 2015 she confirmed that it was possible for a SARS-like virus to jump from bats to humans.

Shi Zhengli has called on greater international cooperation when in the fight against all viruses. Pictured: Wuhan Institute of Virology, P4 laboratory

On May 3, Trump suggested that the coronavirus pandemic is the result of a ‘horrible mistake’ made by China and that Chinese officials tried to cover it up.

The president continued to point the finger at Beijing and fueled growing suggestions that COVID-19 spread from a Wuhan laboratory before snowballing into a worldwide pandemic.

His fiery remarks at a Fox News virtual town hall meeting at Washington’s Lincoln Memorial came hours after Secretary of State Mike Pompeo said there was a ‘significant amount of evidence’ the disease had escaped.

‘Personally, I think they made a horrible mistake, and they didn’t want to admit it,’ he added.

Trump has called the coronavirus the ‘Chinese virus’ on numerous occasions. On March 18 when confronted about his use of the term, he said: ‘It’s not racist at all. No, it’s not at all. It’s from China. That’s why. It comes from China. I want to be accurate.’ 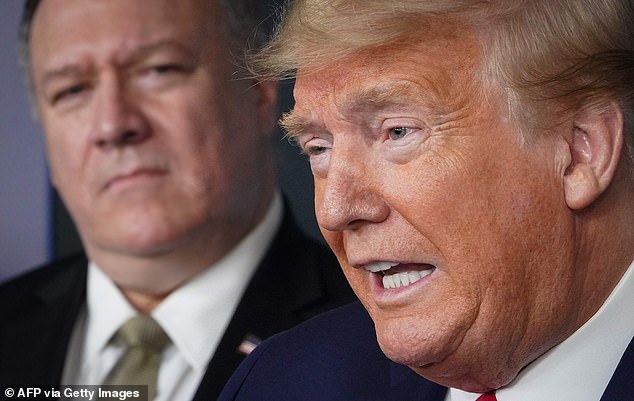 President Trump (right) and U.S. Secretary of State Mike Pompeo (left) have both blamed the outbreak on China, criticizing the country’s response, and sharing the theory that the virus originated in a laboratory

Critics have pointed out that the use of this language fuels hatred towards Asian Americans and other ethnic groups, and Trump has since said he would stop using the phrase.

On May 6, U.S. Secretary of State Mike Pompeo and close ally of Trump renewed his aggressive criticism of China, blaming it for the coronavirus outbreak and demanding again that it share information about the outbreak.

‘They knew. China could have prevented the deaths of hundreds of thousands of people worldwide. China could have spared the world descent into global economic malaise,’ Pompeo told a State Department news conference.

‘China is still refusing to share the information we need to keep people safe.’

Experts, including Dr Anthony Fauci, the United States’ chief virologist, have refuted the claims that the virus could have originated from the lab.

Speaking in May to the National Geographic, Dr Fauci said: ‘If you look at the evolution of the virus in bats and what’s out there now, [the scientific evidence] is very, very strongly leaning toward this could not have been artificially or deliberately manipulated…

‘Everything about the stepwise evolution over time strongly indicates that [this virus] evolved in nature and then jumped species.’

The Chinese virology institute at the centre of US allegations it may have been the source of the COVID-19 pandemic has three live strains of bat coronavirus on-site, but none match the new global contagion, its director has said.

Scientists think COVID-19 — which first emerged in the central Chinese city of Wuhan and has killed more than 340,000 people worldwide — originated in bats and could have been transmitted to people via another mammal.

But the director of the Wuhan Institute of Virology told state broadcaster CGTN that claims made by US President Donald Trump and others the virus could have leaked from the facility were ‘pure fabrication’.

In the interview filmed on May 13 but broadcast Saturday night, Wang Yanyi said the centre has ‘isolated and obtained some coronaviruses from bats’.

‘Now we have three strains of live viruses… But their highest similarity to SARS-CoV-2 only reaches 79.8 percent,’ she said, referring to the coronavirus strain that causes COVID-19.

One of their research teams, led by Professor Shi Zhengli, has been researching bat coronaviruses since 2004 and focused on the ‘source tracing of SARS’, the strain behind another virus outbreak nearly two decades ago.

‘We know that the whole genome of SARS-CoV-2 is only 80 percent similar to that of SARS. It’s an obvious difference,’ she said.

‘So, in Professor Shi’s past research, they didn’t pay attention to such viruses which are less similar to the SARS virus.’ 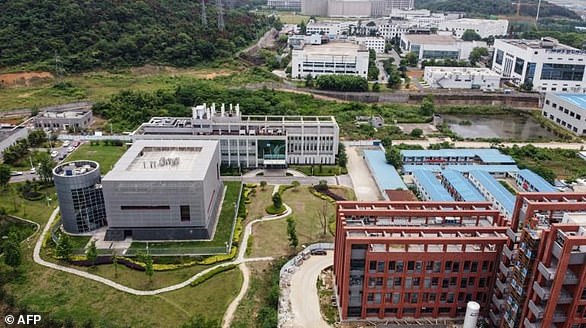 The director of the Wuhan Institute of Virology told a Chinese state broadcaster that the lab has three live strains of bat coronavirus on-site, but that claims the coronavirus could have leaked from the facility were ‘pure fabrication’

Conspiracy rumours that the biosafety lab was involved in the outbreak swirled online for months before Trump and US Secretary of State Mike Pompeo brought the theory into the mainstream by claiming that there is evidence the pathogen came from the institute.

The United States and Australia have called in recent weeks for an investigation into the origins of the pandemic.

Chinese scientists have said that the virus first emerged at a market selling live animals in Wuhan, though officials in Beijing more recently cast doubt about its origins.

Chinese Foreign minister Wang Yi on Sunday blasted what he called efforts by US politicians to ‘fabricate rumours’ about the pathogen’s origins and ‘stigmatise China’.

He said China would be ‘open’ to international cooperation to identify the source of the novel coronavirus, as long as any investigation is ‘free of political interference’.

The World Health Organization has said Washington offered no evidence to support the ‘speculative’ claims about the Wuhan lab.

The Wuhan lab has said it received samples of the then-unknown virus on December 30, determined the viral genome sequence on January 2 and submitted information on the pathogen to the WHO on January 11.

Wang Yanyi said in the interview that before it received samples in December, their team had never ‘encountered, researched or kept the virus’.

‘In fact, like everyone else, we didn’t even know the virus existed,’ she said. ‘How could it have leaked from our lab when we never had it?’

At a press conference Sunday, Zhao Chenxin, deputy secretary-general of the National Development and Reform Commission, said every Chinese prefecture must have its own P3 laboratory to ramp up preparations against infectious diseases.

Apart from the P3 lab plans — the second-highest biosafety classification for labs handling pathogens — Zhao said each city should also have a lower-level P2 laboratory so they could ‘quickly respond in a major epidemic’.

The Wuhan institute has both P3 and P4 labs.