China’s wealthy shoppers are hiring teams of underlings to organise the luxury purchases they have made during the pandemic, as the economy grows in the country where the coronavirus first emerged.

Business is booming for teams of ‘home organisers’ who charge their clients $2,000 or more to arrange their luxury goods in a newly-emerging industry which now has more than 3,000 professionals in China.

A third of all luxury spending globally is by Chinese consumers, according to a McKinsey report – and the pandemic seems not to have dulled their desires.

While most of the world is in a pandemic-related economic slump, China saw its economy grow 4.9 per cent in the third quarter of 2020 after fighting off the disease in January and February. 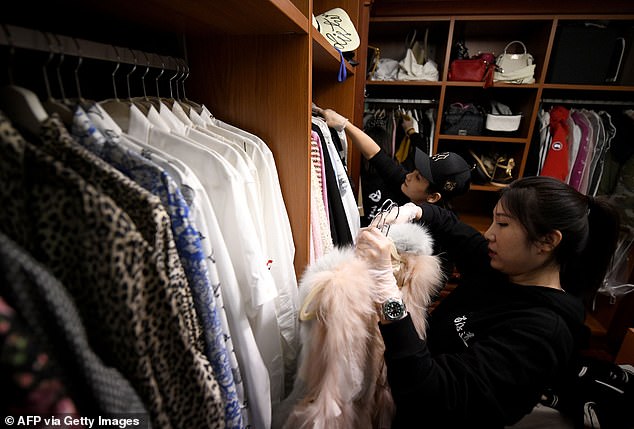 A team of ‘home organisers’ arrange a client’s luxury wardrobe at a high-end apartment in Beijing, as wealthy Chinese shoppers struggle to keep their purchases in order 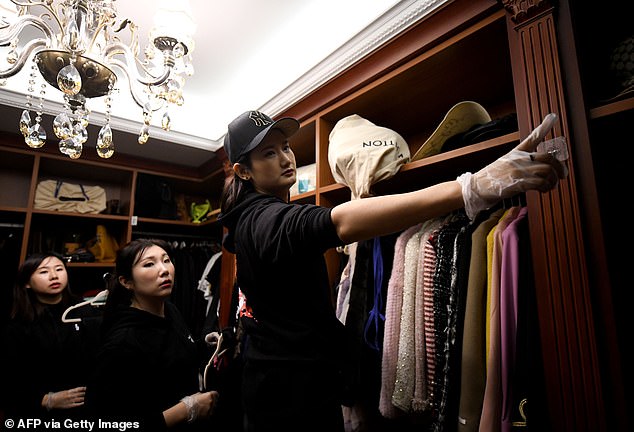 China’s breakneck growth over the past four decades has led to a surge in conspicuous spending, with the newly monied lavishing cash on coveted labels to emboss their status.

‘Single’s Day’ on November 11, the world’s biggest shopping day, will be closely watched for an idea about the state of Chinese consumer sentiment.

However, there is also a downside to chasing fashion, with luxury shoppers struggling to manage their out-of-control wardrobes.

One customer, 32-year-old Chen Rui, hired a team of home organisers who unearthed a Burberry jacket that she did not even remember buying.

Chen’s walk-in closet in a slick Beijing apartment is full of brands from Louis Vuitton and Chanel to Prada and Gucci.

‘I never abandon any of my collection, I just add to it,’ the former art teacher admitted, saying she just loves to indulge. ‘I see no need to restrict myself.’

After her walk-in closet used to cause frequent arguments with her husband, she hired a four-strong team of home organisers to rescue her wardrobe.

The experts in smart black uniforms whisk around her apartment, emptying more than a thousand pieces of clothing and dozens of luxury handbags from her closet. 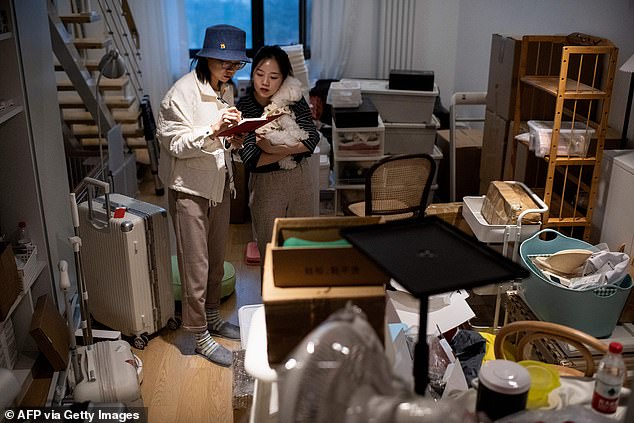 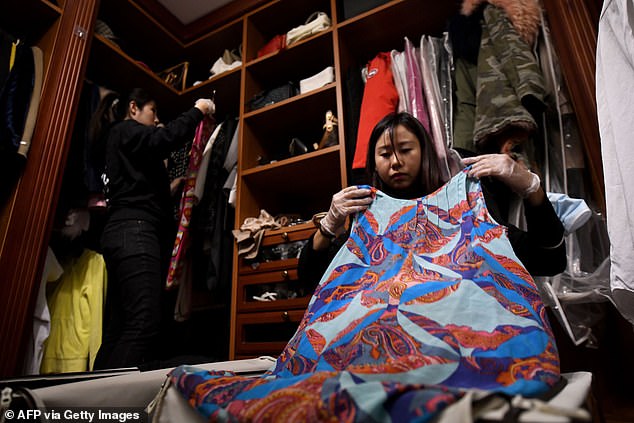 The team is led by Yu Ziqin, one of thousands of graduates from a home-organising school called Liucundao, which teaches the art of bringing order to the chaos of China’s rich shoppers.

School founder Bian Lichun said there were now more than 3,000 professionals in the industry, which state broadcaster CCTV has projected could reach 100billion yuan ($14.9billion) this year in terms of market turnover.

During the pandemic, Bian says business surged by up to 400 per cent as people spent more time at home scouring the internet and assessing where to put all their new acquisitions.

Home organiser Han Yonggang says his clients – who pay upwards of $2,000 each for a process that can take a couple of days – usually have annual income exceeding one million yuan a year.

‘I’m earning more than I did when I was a graphic designer,’ Han explains.

But unlike the advice of Japanese guru Marie Kondo – whose world-famous decluttering ethic has inspired millions to tidy up – Bian and her team never persuade clients to throw things away, or ask them to buy less.

Instead, they teach ‘the way to retain’, Bian says, through storage and canny design — such as extra-thin coathangers. ‘There is nothing useless in the world,’ she says. 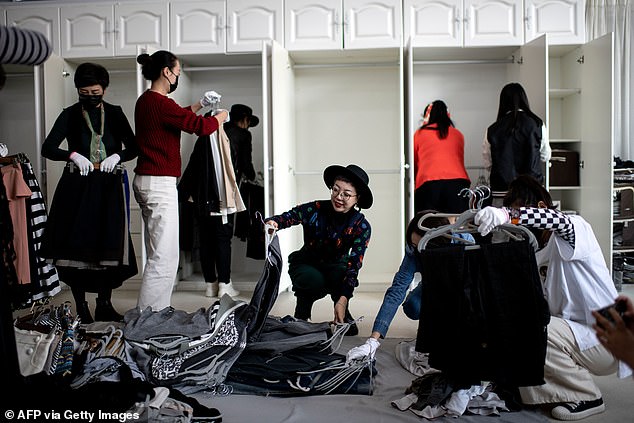 Bian Lichun (centre), founder of the Liucundao Business School, sorting clothes with students during a home organising class in Beijing 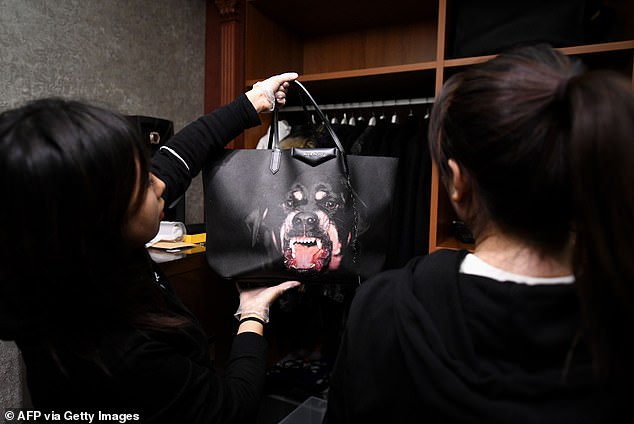 Two of China’s 3,000 professional home organisers look at a handbag at Chen Rui’s apartment in Beijing

Bian founded her company ten years ago after seeing a gap in the market for the upwardly mobile classes.

‘People used to think that we are cleaners – but now they respect us very much,’ Bian says of what is now seen as an essential service to some of their clients.

‘We even know how many pairs of underwear they have… and we have created a good life for them.’

The transport ministry says the number of express packages delivered per person in China this year will be nearly 60 – about twice the global average.

Liu Wenjing, from the school of economics and management at Tsinghua University, says e-commerce has created a culture of ‘online shopping at any time and anywhere’.

But Bian argues the issue is not one of over-consumption or the psychology of spending, but more about the challenge of finding somewhere to hoard clothes in China’s densely populated cities.

‘Our aim is to sort out space, not fix people,’ she said.