He may have retired from public Royal duties but it didn’t stop Prince Andrew performing a special Royal mission for the Queen last week.

The Duke carried a message to the Chinese government from his mother on Friday expressing sympathy for those affected by the deadly coronavirus outbreak.

It was delivered when he attended a dinner hosted by the Chinese ambassador to Britain, Liu Xiaoming. The meeting, recorded in photographs posted to Liu’s Twitter account, marks one of the Duke’s first major appearances since he withdrew from public duties in November after his disastrous Newsnight interview about his relationship with convicted paedophile Jeffrey Epstein. Pressure is mounting for the Prince to co-operate with the FBI, which is investigating the late financier’s crimes in the US. 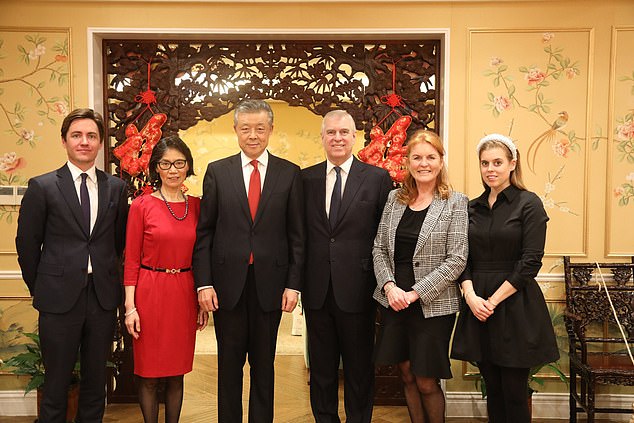 The Duke of York with Sarah, the Duchess of York, third and second from right, Princess Beatrice, far right, her fiance Edoardo Mapelli Mozzi, far left, and the Chinese ambassador Liu Xiaoming and his wife Hu Pinghua last week

Liu announced on Twitter: ‘Her Majesty The Queen sent an encouraging message to President Xi [Jinping] and Chinese people: At the critical time of fighting #coronavirus, I express my sincere sympathy for Chinese people, and pray for the speedy control and victory over the virus. It was conveyed by Duke of York.’ In a separate tweet, Liu continued: ‘My wife and I invited Duke of York and his family to our residence and celebrated Lunar New Year. Their enthusiasm for China and contribution to China-UK relation is highly appreciated.’

Last week it emerged that Andrew will give Princess Beatrice away when she marries in the Chapel Royal at St James’s Palace in May. But there was a row over a plan to ring Westminster Abbey’s bells on his 60th birthday. Epstein victim Virginia Roberts, who alleges the Prince had sex with her three times when she was a teenager, which he vehemently denies, tweeted: ‘The only thing that should be ringing for him is the sound of shackles tied around his ankles on his way to the tower.’ The Duke was spotted yesterday driving from his house in Windsor beside his former wife Sarah. The pair met two days after Beatrice, 31, and Edoardo Mapelli’s wedding arrangements were announced. Earlier this week the Prince agreed to turn down a promotion to the rank of Admiral ahead of his 60th birthday later this month. The move would have been in line with a long-standing policy under which senior Royals are treated as if they had stayed in the Armed Forces and are promoted to higher ranks as a result. 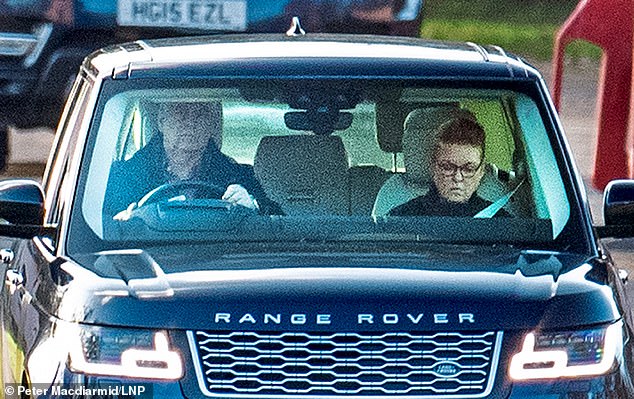 Prince Andrew is seen driving Sarah, Duchess of York from his house in Windsor Great Park