A subway commuter in Shanghai has narrowly escaped death after being wedged between the platform’s safety doors and a fast train during rush hours.

The woman had reportedly tried to force her way onto a crowded train by physically opening the screen doors.

However, the carriage doors did not open, leaving her stranded in a tiny gap. 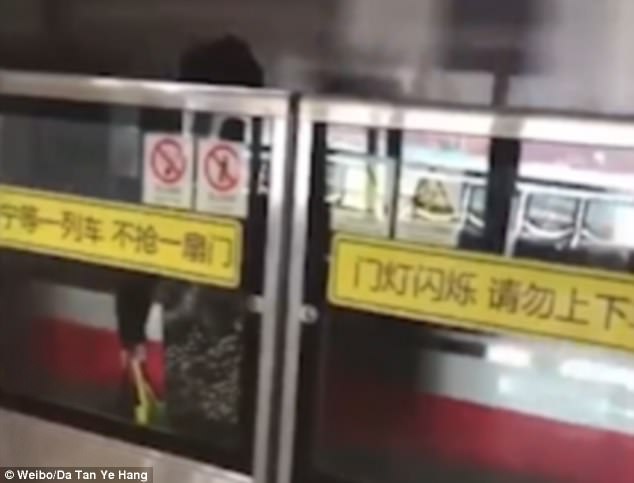 The woman was seen holding her handbags and leaning back anxiously to avoid getting hit as the train sped past her. Witnesses heard her saying that she was late for work

A video of the incident on Monday morning shows the train starting to speed up, forcing the passenger to remain helplessly in the awkward and dangerous position.

The incident occurred at Baoan Highway station on Line 1 at around 7:10am, according to Xinmin Evening News.

She was also seen holding two handbags and leaning back anxiously to avoid getting hit.

Witnesses heard her saying that she was late for work and became desperate.

Shanghai Metro has confirmed the incident and is investigating into the matter, according to Kan Kan News.

The woman is reported to suffer no injuries. 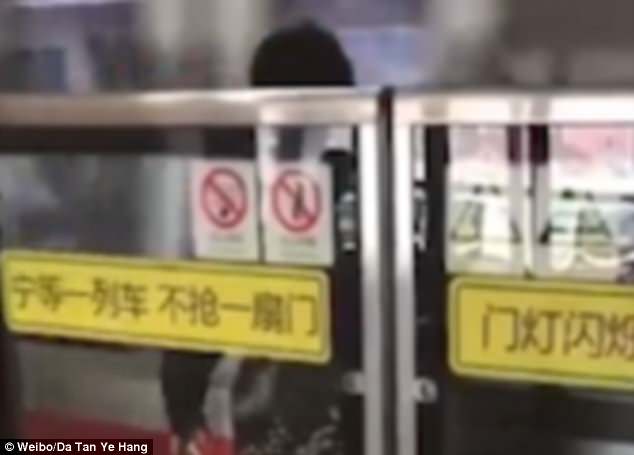 The woman in Shanghai is seen stuck between the speeding train and the platform screen doors after she forcefully opened them. Luckily, she did not suffer any injuries

Net users said the train operator must be held responsible for not ensuring the safety of their commuters.

Others were appalled by the woman’s actions.

‘She is risking her life just because she couldn’t wait three more minutes?’ one commented.

Many cities in China have started to install safety doors on subway platforms to protect commuters after suicides and accident concerns were raised, according to Xinhua News.

In 2014, a woman in Beijing subway station was dragged onto the tracks and killed after being trapped between the train doors and the safety doors.