Prayers, compliments and cash are pouring in for Kyle Rittenhouse, the gunman accused of fatally shooting two protesters in Kenosha, Wisc., last month, as the 17-year-old has become a celebrated cause among far-right voices in the United States.

Fox News hosts, conspiracy theory websites and supporters of U.S. President Donald Trump have hailed the alleged shooter as a “patriot” and “hero.” They’ve also opened up their pockets to him, pledging more than US$357,000 through a crowdfunding site to cover with his legal costs.

“I want him as my president,” conservative pundit Ann Coulter tweeted last week, in a message Twitter later forced her to delete.

The teenager is facing murder charges in Wisconsin over the alleged shootings, which happened during a protest over the police shooting of Jacob Blake in late August. Blake, who is Black, was shot in the back seven times while trying to get into an SUV with his young children inside. He survived but was paralyzed by the incident.

Rittenhouse allegedly shot three people, two of them fatally, in back-to-back encounters with protesters during a chaotic night in Kenosha on Aug. 25.

Videos show Rittenhouse brandishing an AR-15-style rifle and standing guard with a militia group in the town earlier that night, after crossing state lines from Illinois to join the group. One video shows police thanking Rittenhouse and his allies for showing up, moments before officers scolded protesters for being out after curfew.

Rittenhouse has been charged as an adult with two counts of first-degree homicide and one count of attempted homicide. He is also charged with recklessly endangering the safety of two other victims and possessing a weapon while under the age of 18.

Police have identified the victims as Anthony Huber, 26, and Joseph Rosenbaum, 36.

Rittenhouse is a supporter of police, gun ownership and U.S. President Donald Trump, his past social media posts show.

His story appears to have struck a chord with many conservatives, who have flocked to his defence through crowdfunding, social media and right-wing news outlets, echoing his lawyers’ claims that he was defending himself.

President Trump has also declined to condemn the fatal shootings, and suggested this week that Rittenhouse acted in self-defence.

“I guess he was in very big trouble,” Trump said. “He probably would have been killed, but it’s under investigation.”

The president did not say Jacob Blake’s name during a roundtable meeting with Kenosha leaders on Tuesday. He also did not meet with Blake’s family.

A fundraising campaign hosted by GiveSendGo, a self-described “Christian crowdfunding site,” has raised more than US$357,000 to help with Rittenhouse’s legal costs. The campaign’s organizers say they are in touch with Rittenhouse’s lawyers and family.

Many donors posted encouraging messages, along with their contributions, on the site.

“You will make an incredible Sheriff or Police Officer some day,” user Robert M. Hindley wrote.

“Kyle Rittenhouse is an American hero,” user CanuckleHead420 wrote, in a message that applauded him for shooting “communists.”

According to GiveSendGo’s website, the platform is meant to be a “place to fund hope” and to help people “work together to be the light of the world.”

GiveSendGo featured the accused Kenosha shooter’s cause on its homepage on Wednesday afternoon.

“GiveSendGo is committed to giving both sides of the political culture in our society an equal chance to let their voices be heard,” the site tweeted last week. “We will not be removing Rittenhouse’s campaign.”

GoFundMe prohibits fundraisers to cover the legal costs of alleged crimes associated with violence, according to its rules.

The suspect allegedly shot Rosenbaum after Rosenbaum threw a plastic bag at him and tried to take his rifle, according the criminal complaint released by prosecutors.

Videos show that the suspect fled the scene of the first shooting while several protesters gave chase. One protester caught up to him and cuffed him across the head with a bag, causing him to trip. The suspect can be seen firing several shots at the protesters from a sitting position.

Huber, who was carrying a skateboard, was struck in the chest and killed, according to the criminal complaint.

A third man was also shot and injured.

Video shows the suspect walked past police after the shootings while a nearby protester tried to report him as the shooter.

Rittenhouse went home that night and was arrested in Antioch, Ill., the following day. 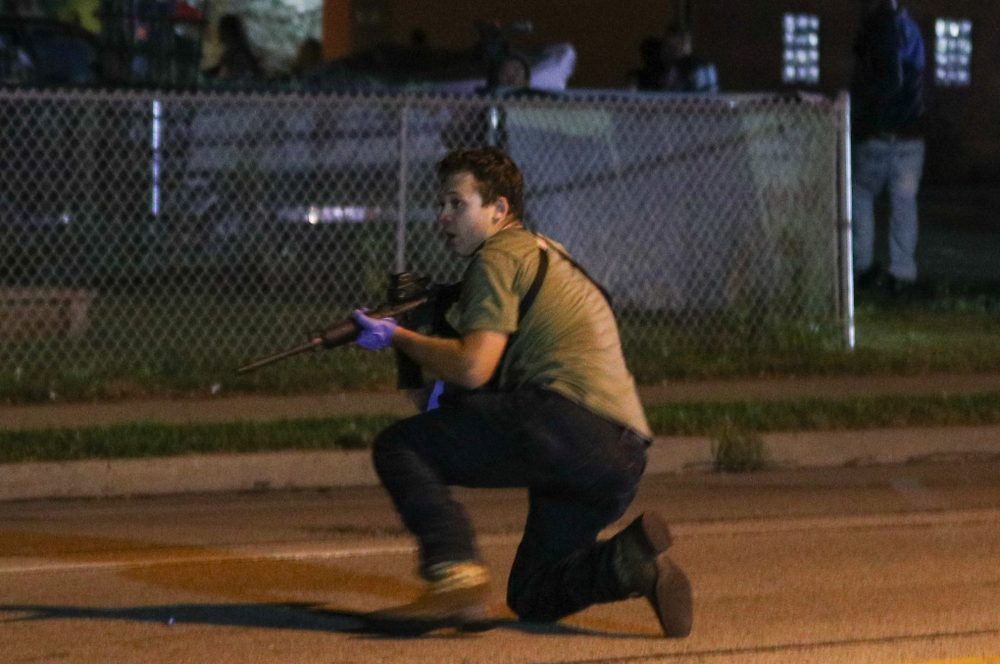 Rittenhouse has said he was in Kenosha to protect local businesses. His lawyer, John Pierce, says he acted in self defence.

The accused shooter thanked his supporters in a phone call from jail on Tuesday, which Pierce shared on social media.

“I just want to thank every single one of you from the bottom of my heart for the underlining (sic) support, it’s just amazing,” Rittenhouse said.

“I’m going to be out of here soon. Stay strong and I hope to see you guys soon.”

—With files from The Associated Press