Concerns have been raised over China’s apparent crackdown on Christianity as the ruling Community party continues to intensify its control over religious freedom in the country.

Churches were raided and demolished, Bibles and holy books were confiscated and new laws were established to monitor religious activities in the country’s province of Henan, which has one of the largest Christian populations in China.

Under President Xi Jinping, China’s most powerful leader since Mao Zedong, believers are seeing their freedoms shrink dramatically even as the country undergoes a religious revival.

Experts and activists say that as Xi consolidates his power, he is waging the most severe systematic suppression of Christianity in the country since religious freedom was written into the Chinese constitution in 1982. 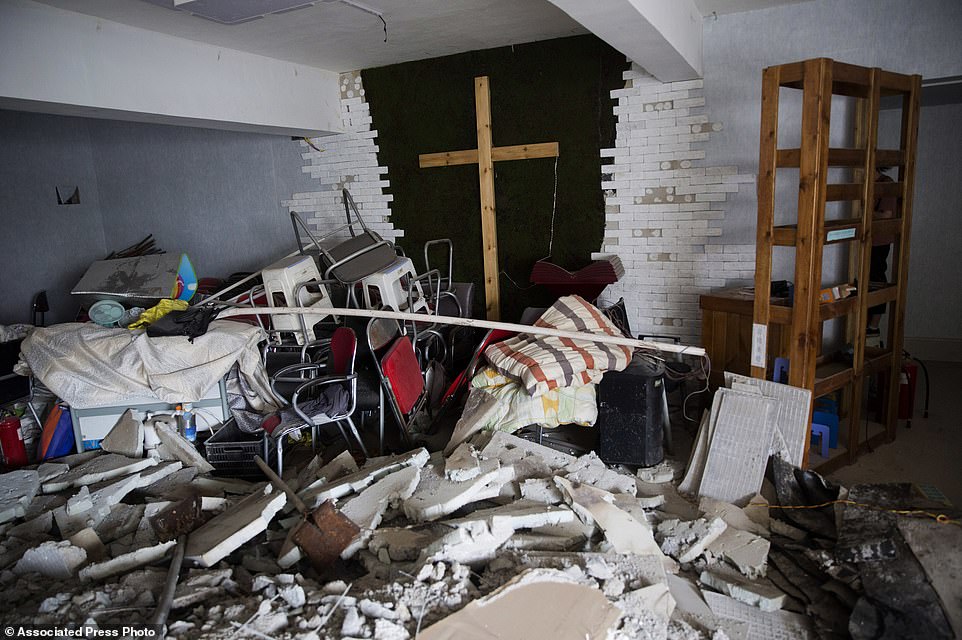 A demolished house church is seen in the city of Zhengzhou in central China’s Henan province. Under President Xi Jinping, China’s most powerful leader since Mao Zedong, believers are seeing their freedoms shrink dramatically 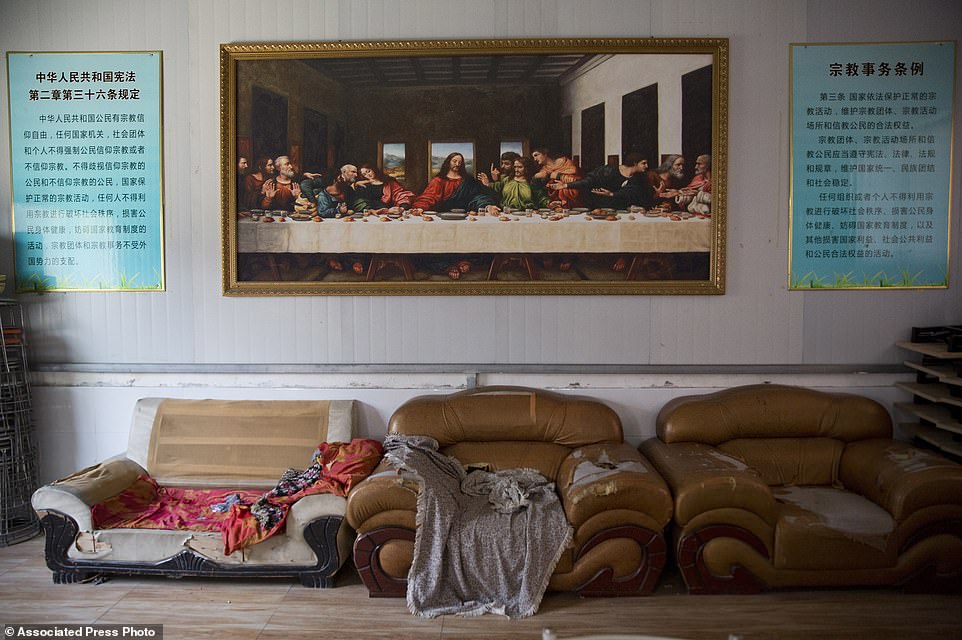 A painting of the Last Supper is seen next to posters quoting China’s constitution on religious freedom in a house church shut down by authorities near the city of Nanyang in central China’s Henan province, the country’s Christian heartland 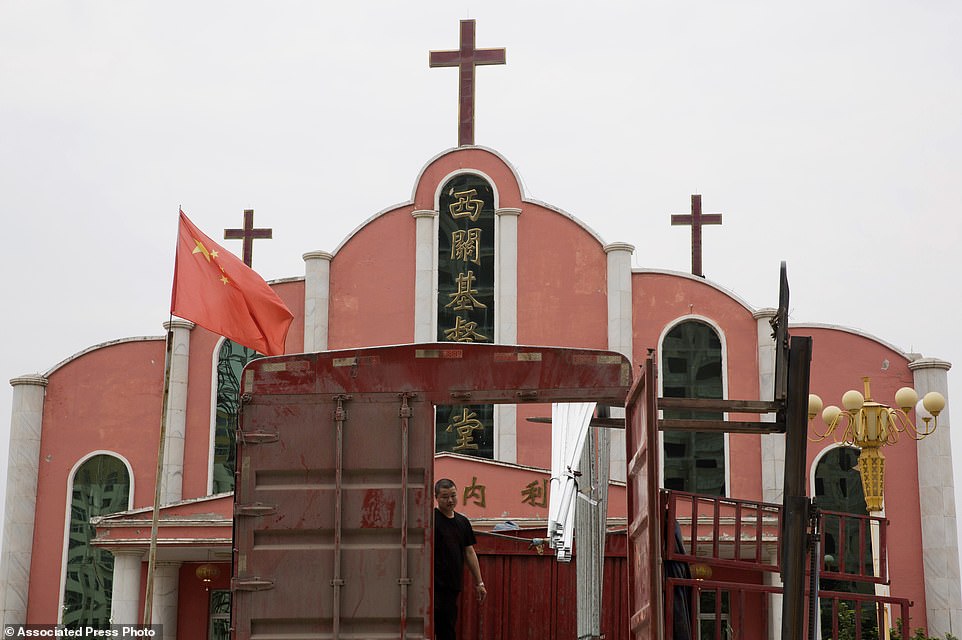 A Chinese national flag flies over a church near the city of Pingdingshan in Henan province. Experts say that President Xi Jinping is waging the most severe systematic suppression of Christianity in the country since 1982

Guo, a 62-year-old Chinese shopkeeper had waited nearly his entire adult life to see his dream of building a church come true – a brick house with a sunny courtyard and spacious hall with room for 200 believers.

But in March, about a dozen police officers and local officials suddenly showed up at the church on his property and made the frightened congregants disperse.

They ordered that the cross, a painting of the Last Supper and Bible verse calligraphy be taken down. And they demanded that all services stop until each person along with the church itself was registered with the government, said Guo, who gave his last name only from fear of retribution.

Without warning, Guo and his neighbors in central Henan had found themselves on the front lines of an ambitious new effort by the officially atheist ruling Communist Party to dictate – and in some cases displace – the practice of faith in the country.

The crackdown on Christianity is part of a broader push by Xi to ‘Sinicise’ all the nation’s religions by infusing them with ‘Chinese characteristics’ such as loyalty to the Communist Party. Over the last several months, local governments across the country have shut down hundreds of private Christian ‘house churches’. A statement last week from 47 in Beijing alone said they had faced ‘unprecedented’ harassment since February. A 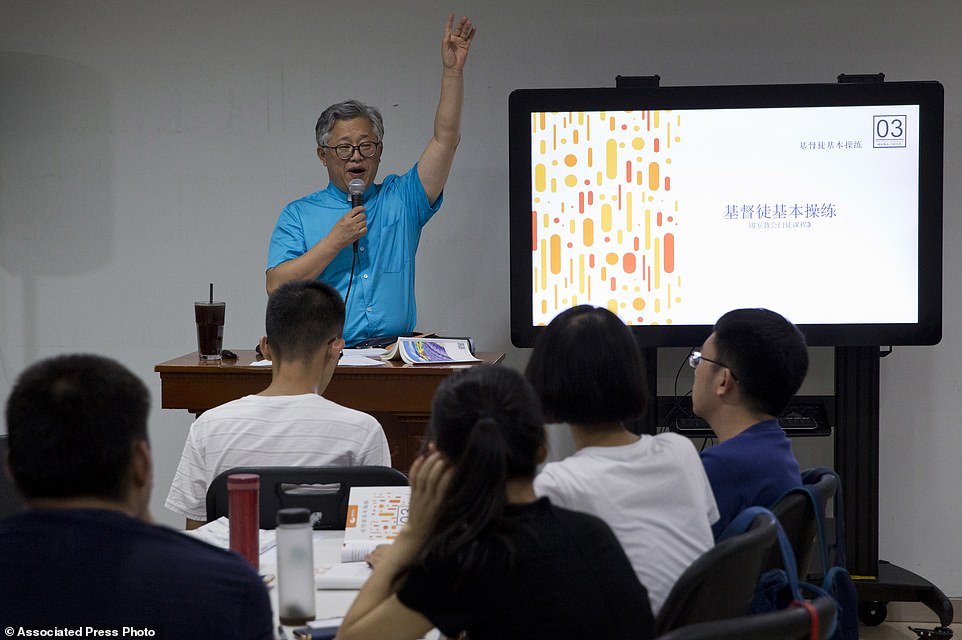 A pastor, Jin Minri, leads a class on Christian beliefs at the Zion Church in Beijing. After Jin refused authorities’ request to install surveillance cameras in his house church, police questioned hundreds of members of the 1,500-person congregation 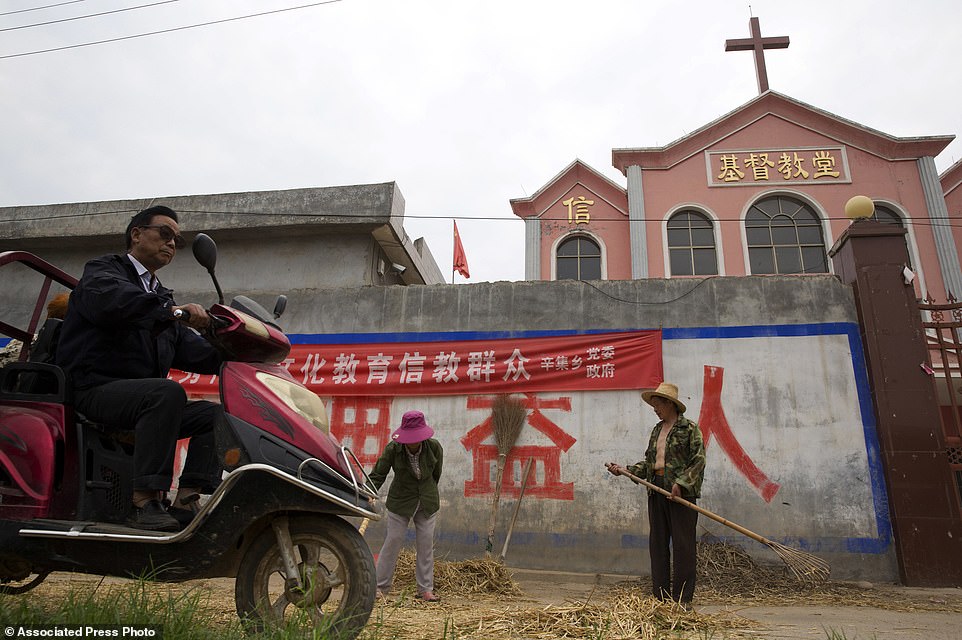 A slogan outside a church reads ‘Educate the believers with excellent Chinese traditional culture’ near Pingdingshan, Henan 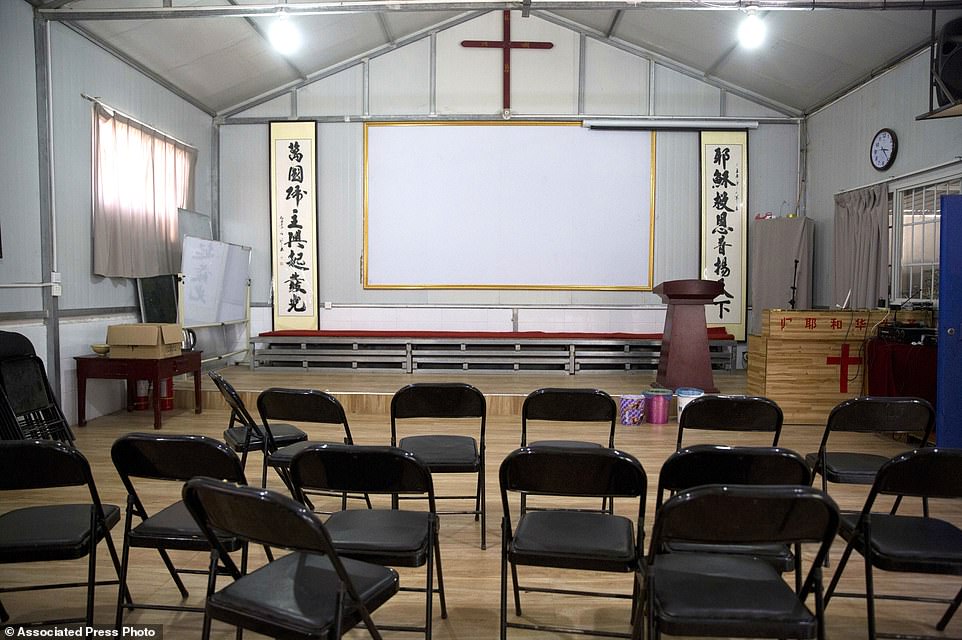 Chinese calligraphy reads ‘All nations belong to the Lord arising to shine’ at left and ‘Jesus’s salvation spreads to the whole world’ at right are displayed below a crucifix in a house church shut down by authorities near the city of Nanyang, Henan

A dozen Chinese Protestants interviewed by the Associated Press described gatherings that were raided, interrogations and surveillance, and one pastor said hundreds of his congregants were questioned individually about their faith. Like Guo, the majority requested that their names be partly or fully withheld because they feared punishment from authorities.

‘Chinese leaders have always been suspicious of the political challenge or threat that Christianity poses to the Communist regime,’ said Xi Lian, a scholar of Christianity in China at Duke University. ‘Under Xi, this fear of Western infiltration has intensified and gained a prominence that we haven’t seen for a long time.’

Officials once largely tolerated the unregistered Protestant house churches that sprang up independent of the official Christian Council, clamping down on some while allowing others to grow. But this year they have taken a tougher approach that relies partly on ‘thought reform’ – a phrase for political indoctrination.

Last November, Christian residents of a rural township in south-east Jiangxi province were persuaded to replace posters of the cross and Jesus Christ inside their homes with portraits of Xi, a local official said.

‘Through our thought reform, they’ve voluntarily done it,’ Qi Yan, a member of the township party committee, told the AP by phone. ‘The move is aimed at Christian families in poverty, and we educated them to believe in science and not in superstition, making them believe in the party.’ 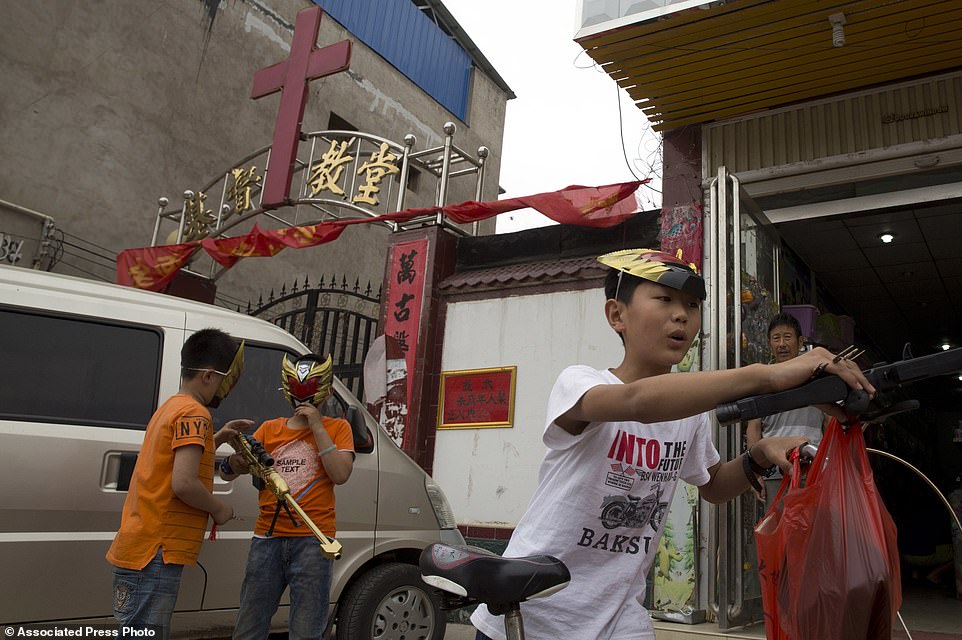 Children play near the entrance of a church with a sign reading ‘Notice: Minors prohibited from entry’ near Lushan, Henan 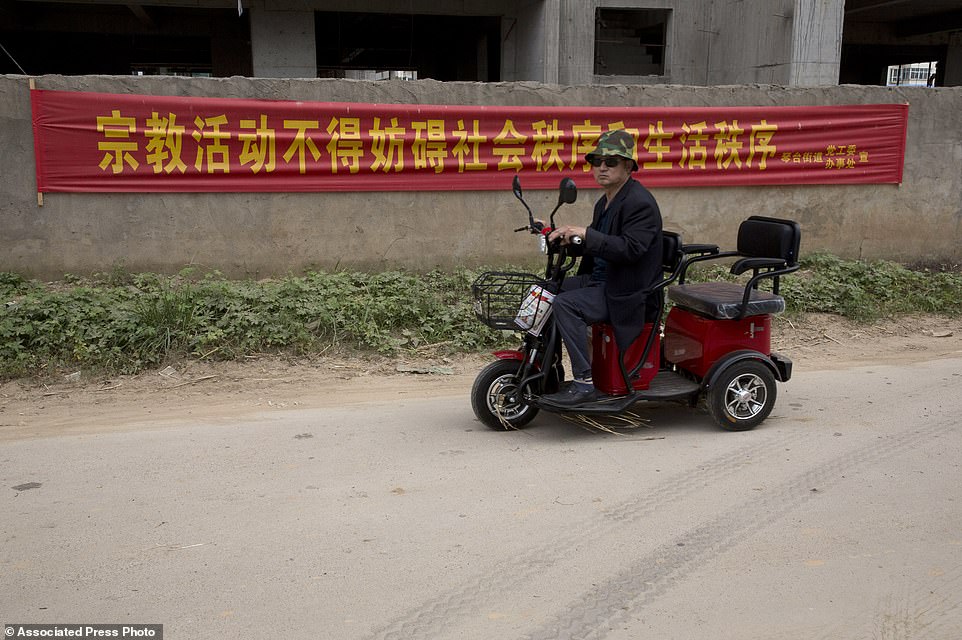 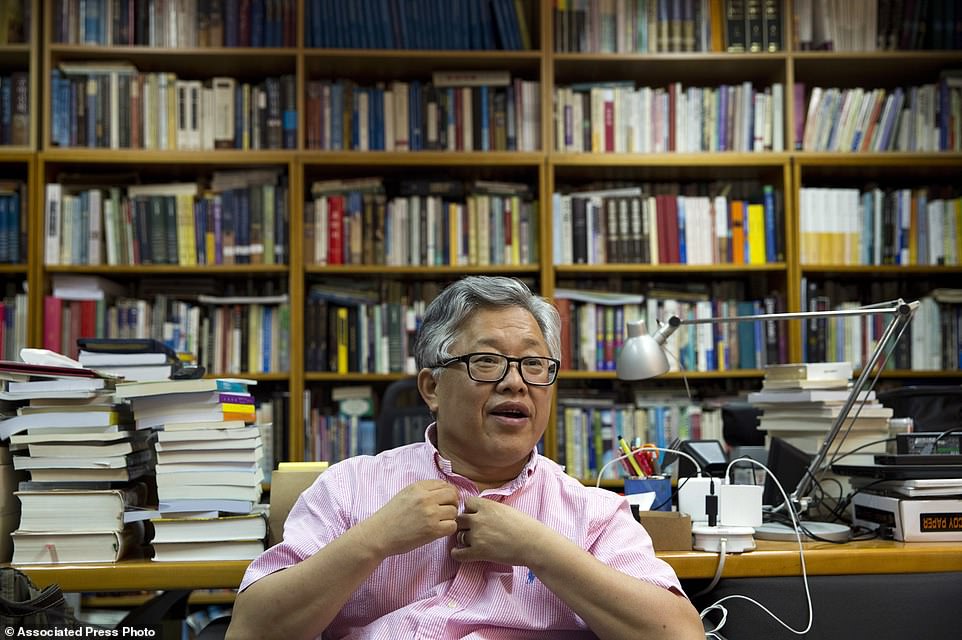 The poster campaign appears to symbolise what analysts see as the underlying force driving the change in the party’s approach to religion: the ascendance of Xi.

‘Xi is a closet Maoist – he is very anxious about thought control,’ said Willy Lam, a Chinese politics expert at the Chinese University of Hong Kong. ‘He definitely does not want people to be faithful members of the church, because then people would profess their allegiance to the church rather than to the party, or more exactly, to Xi himself.’

Various state and local officials declined repeated requests to comment. But in 2016, Xi explicitly warned against the perceived foreign threats tied to faith, telling a religion conference: ‘We must resolutely guard against overseas infiltrations via religious means.’

Those who resist pay the price.

After Jin Mingri, a prominent pastor who leads Zion Church in Beijing, refused local authorities’ request to install surveillance cameras inside his house church, police individually questioned hundreds of members of the 1,500-person congregation, he said.

The congregants faced veiled threats, Jin said, and many were asked to sign a pledge promising to leave Zion, which the government agents called illegal, politically incorrect and a cult. Some people lost their jobs or were evicted from rented apartments because police intimidated their bosses and landlords. 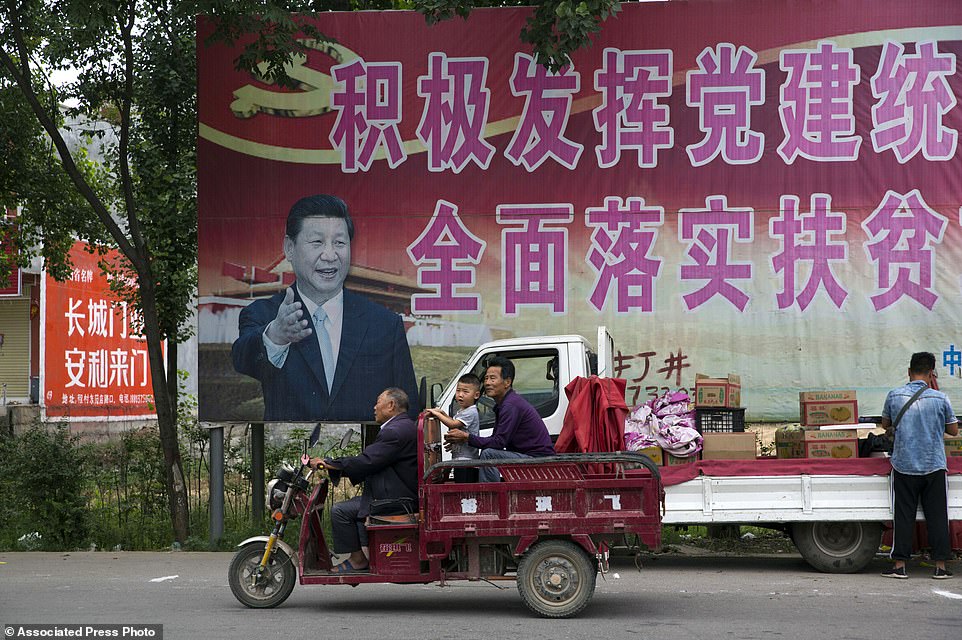 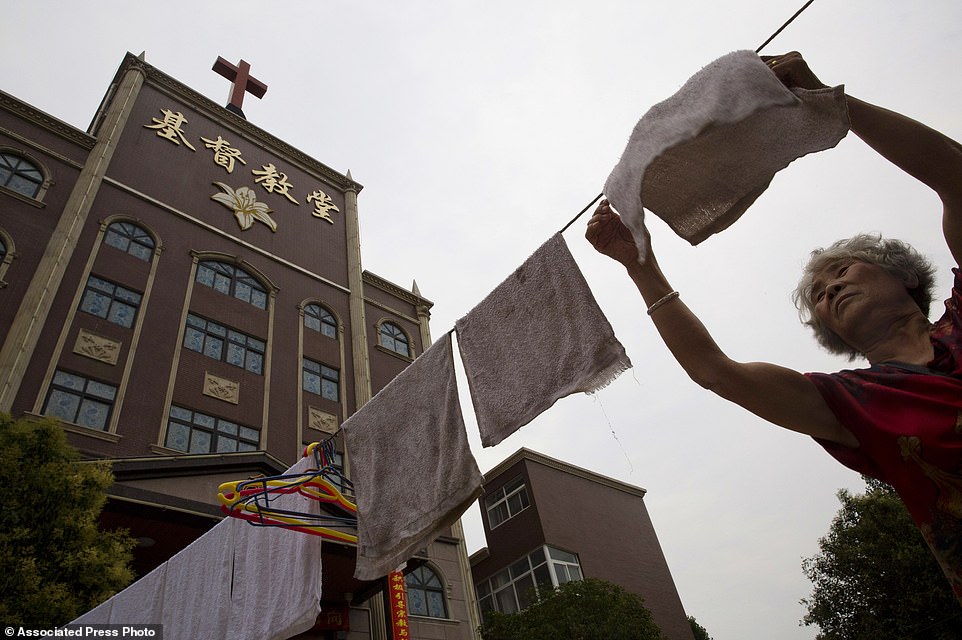 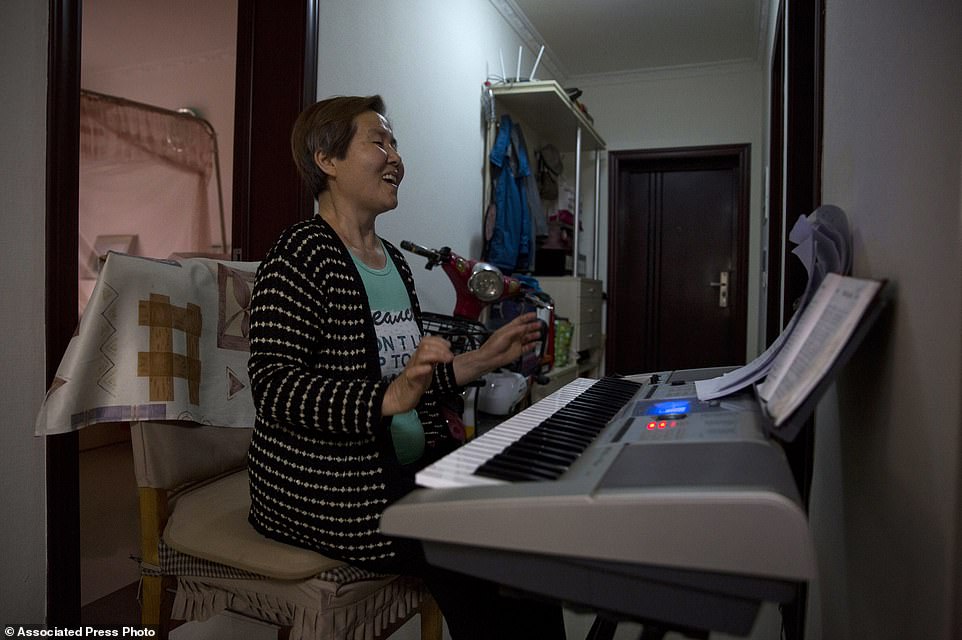 ‘A lot of our flock are terrified by the pressure that the government is putting on them,’ he said. ‘It’s painful to think that in our own country’s capital, we must pay so dearly just to practice our faith.’

In Zhengzhou, Henan’s capital, all that is left of one house church is shattered glass, tangled wires and torn hymnbooks, strewn among the rubble of a knocked-down wall. Pegged to another wall is a single wooden cross, still intact.

The church inside a commercial building had served about 100 believers for years. But in late January, nearly 60 officials from the local religion department and police station appeared without warning. Armed with electric saws, they demolished the church, confiscated Bibles and computers and held a handful of young worshippers – including a 14-year-old girl – at a police station for more than 10 hours, according to a church leader.

Even Protestant churches already registered with the state have not been spared greater restrictions.

When reporters visited five such churches in Henan this June, all bore notices at their entrances stating that minors and party members were not allowed inside. A banner above one church door exhorted members to ‘implement the basic direction of the party’s religious work.’ Another church erected a Chinese flag at the foot of its steps. 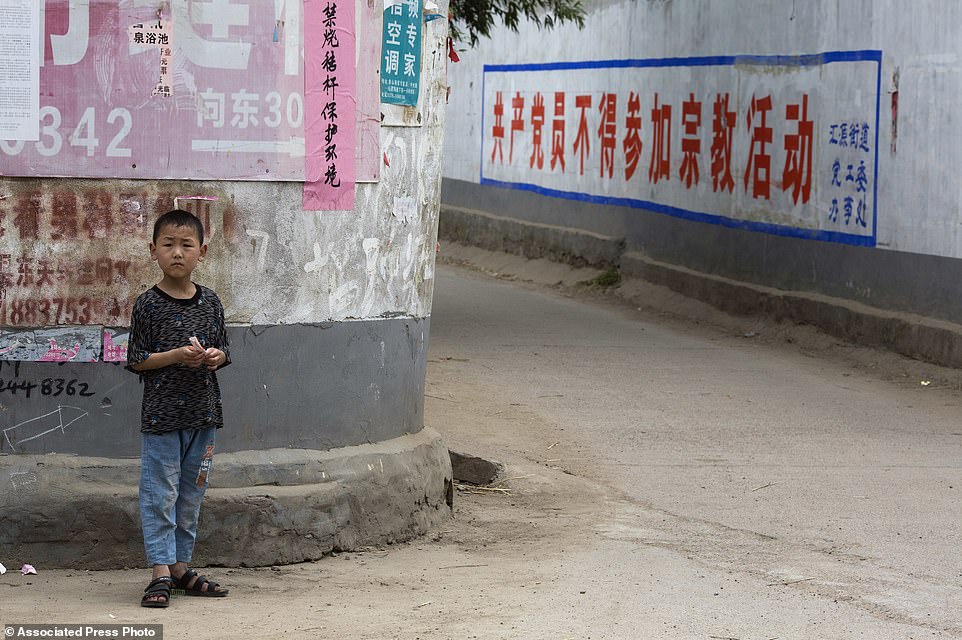 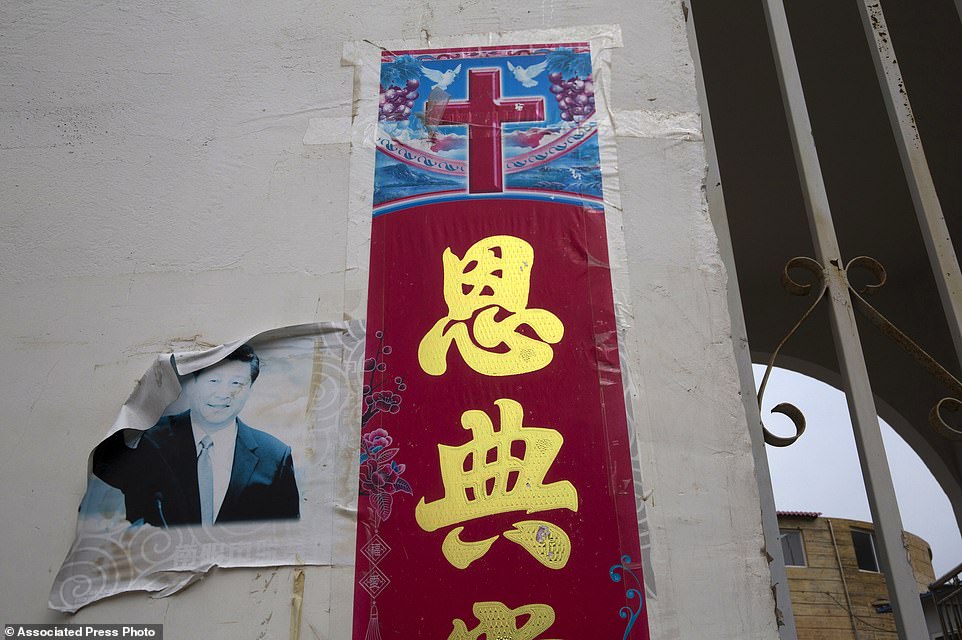 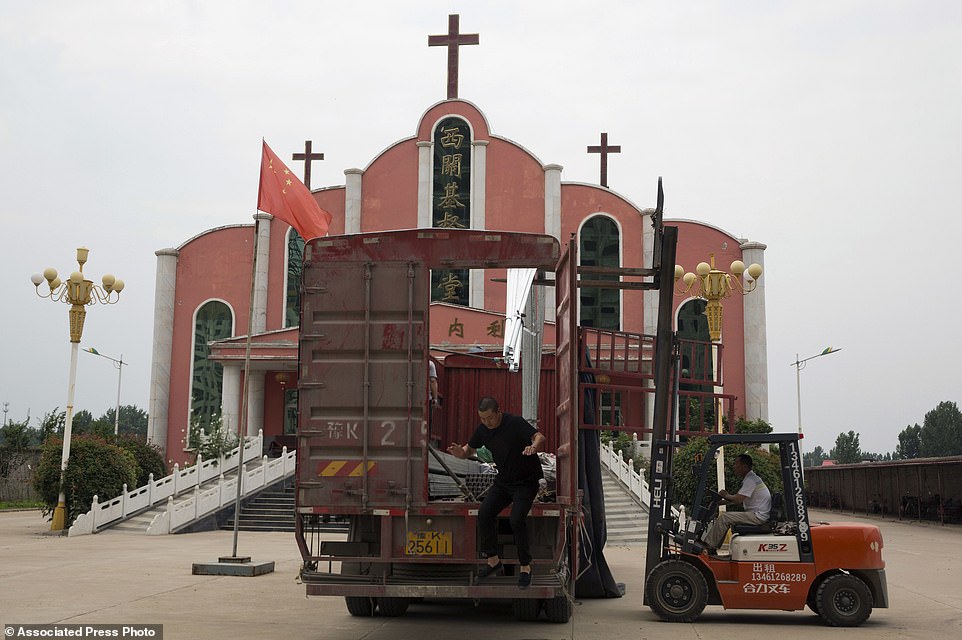 Guo’s brick house was largely deserted this summer. Around the door frame, tattered red outlines remained of a scroll that once read ‘God’s love is as deep as the sea.’

Inside, Guo has refused to remove the cross and other decorations, telling authorities they are within his private property.

Among them, pinned to a wall in the nave, is a bright blue poster that quotes China’s constitutional promise of religious freedom.

In Xinjiang, a Muslim-majority region in the country’s far west, millions of ethnic Uighurs face repression and torture as authorities claimed to rule out potential separatist movements.

Former inmates have told of the horror after being detained in what the Chinese government calls ‘political re-education camps’, where they were physically and mentally tortured and as punishment, were forced to eat pork and drink alcohol. 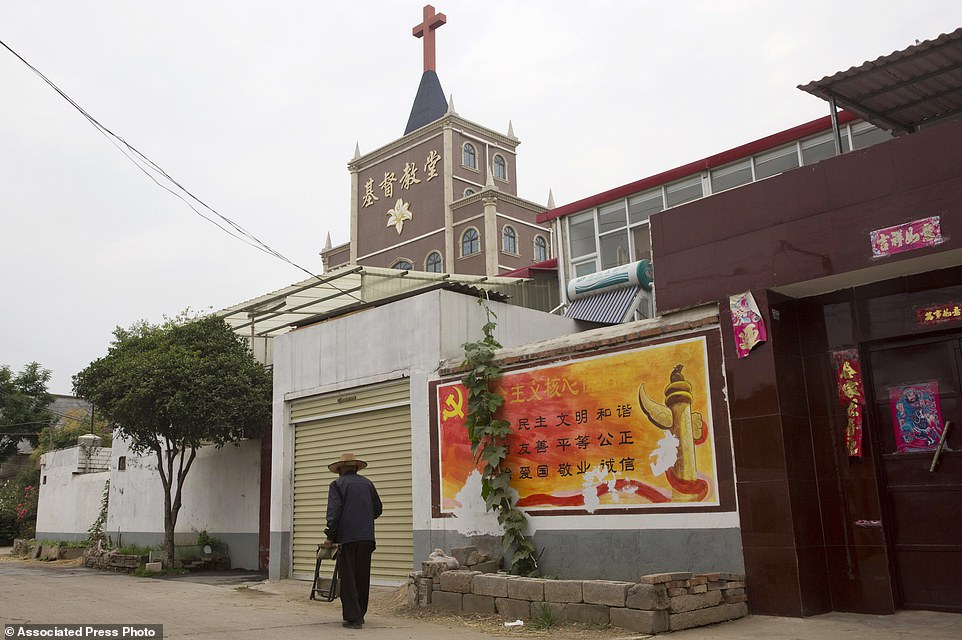 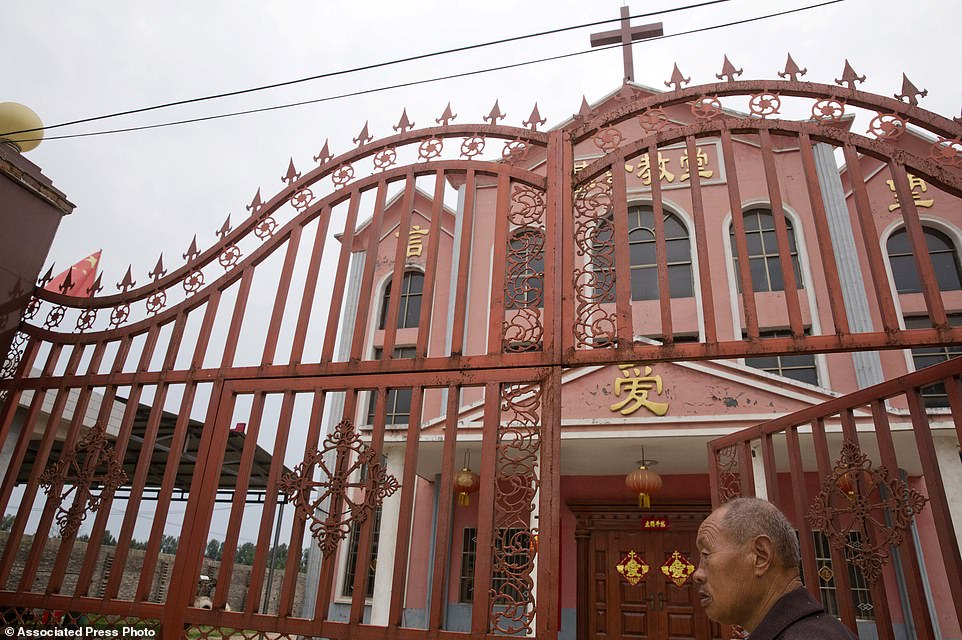 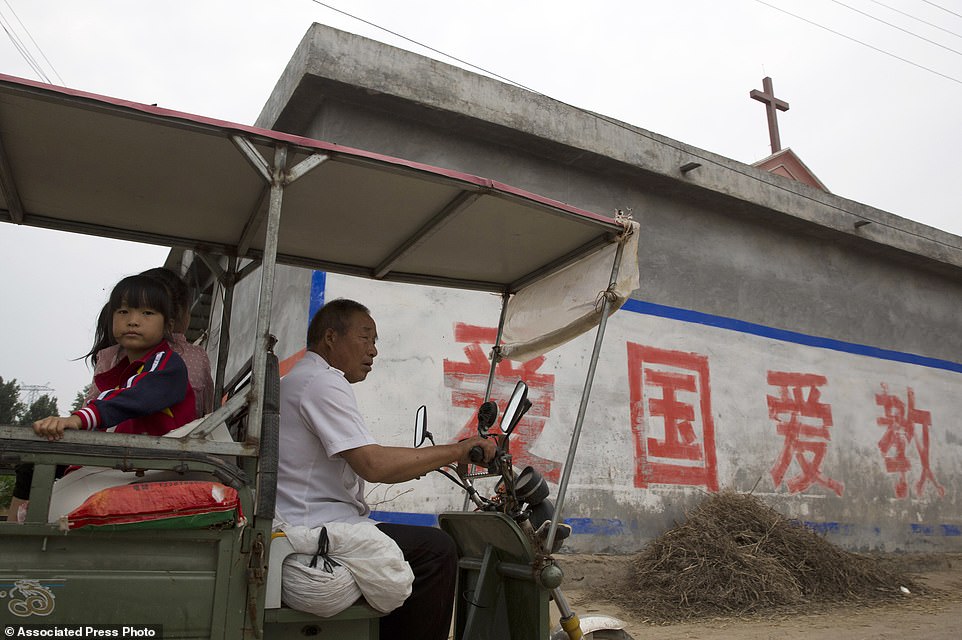 A man drives past the slogans for ‘Patriotism and Love for the church, Glorifying God and serving human beings’ in Henan

In late July, children in traditionally Buddhist Tibet were required to sign an agreement to ‘not take part in any form of religious activity’ during the summer holidays, according to the Global Times.

The policy appears to reflect increasingly harsh restrictions on the Himalayan region’s traditional Buddhist culture, largely aimed at reducing the influence of the region’s spiritual leader, the Dalai Lama, who lives in exile in India.

On Tuesday, state media announced that all religious institutions across the country are now required to fly the national flag, in a move to assimilate religions into the socialist society.

The rule is necessary to strengthen awareness of respect for the flag – a symbol of the country’s embrace of communism in 1949 – and preserve the flag’s dignity, Xinhua claimed, adding that the practice can enhance the public’s national consciousness and civic awareness.