Is the Church of England sounding the death knell for village schools? New proposals would make it easier to axe small institutions

The death knell for small village schools has been sounded by the publication of Church of England proposals that would make it easier to close them.

The Church wants a change in the law, which should make it more straightforward to axe them.

It argues that some rural schools are becoming increasingly ‘difficult to justify’ amid dwindling pupil numbers and the employment of a ‘skeleton staff’.

But campaigners for small schools warn that ‘recent Anglican policy wills the death of the village school as we have known it’.

There is currently a legal presumption against closing rural schools. Before one is shut a number of factors must be considered, including ‘the likely effect of the closure of the school on the local community’.

However, the CofE, which runs more than 70 per cent of rural schools with fewer than 110 pupils, wants a review ‘to ensure decision-makers focus on the educational interests of children’.

This could lead to the Church arguing on a case-by-case basis that a squeezed budget and low pupil roll is hampering children’s achievement and should result in closure or joining with neighbouring schools. 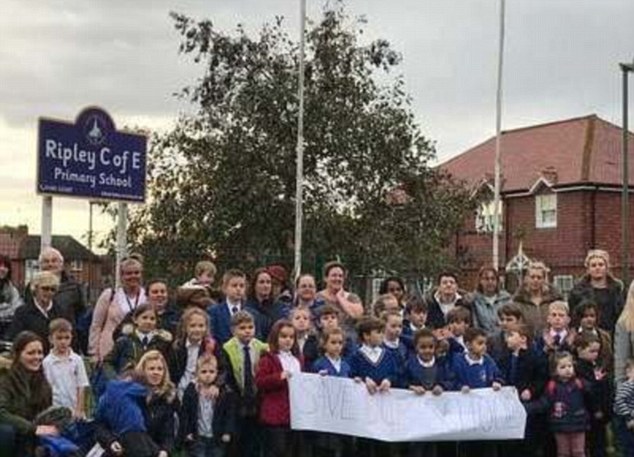 Nigel Genders, the CofE’s chief education officer, told the Times Educational Supplement: ‘Too often in the debate we put [educational quality] as a subsidiary question and say, ‘We don’t want to see the school lost because we have already lost the post office and the pub and the doctor’s surgery’.

‘That’s the wrong way around. We need to start by asking, ‘What’s likely to give these children the best education they can have?’

‘It may well be that we do that in a way that still means they can access it locally within their village.

‘But it needs to be that way around, rather than asking, ‘How do we keep this village’s last bastion as a community presence open, which is the school, irrespective of what the quality of education might be?’

Mr Genders said he believed the Department for Education was ‘very open’ to the change.

The CofE published a report, ‘Embracing Change: Rural and Small Schools’, that reiterated its previous stance that ‘small rural schools could not continue to operate as standalone units’, and stresses a need for them to ‘come together in formal groupings’.

The report acknowledges that small schools may have to close, saying: ‘Where a school’s budget is under pressure and numbers on roll are low, it can be difficult to justify a decision to keep a school open when significant investment would be required to bring the building up to standard.’

Facing the axe: A primary with just 38 pupils

A village primary school with just 38 pupils is set to close despite huge opposition from families.

Ripley CofE Primary School, Surrey, was placed in special measures last May by Ofsted and ordered to become an academy.

However, no trusts were willing to take on the small, failing school and Surrey County Council has proposed it should close this summer.

Kelly Brown, who has two sons at the school, is among parents campaigning to keep it open. ‘This isn’t just any old school,’ she said. ‘It’s a family. They haven’t taken into consideration the children at all.’

A final decision is expected on Monday.

The CofE report also recommends that the Government changes the rules in a way that campaigners argue would make it easier to close small rural schools.

It states: ‘The statutory process for decision making on the future distribution of schools in rural areas should be reviewed to ensure decision-makers focus on the educational interests of children.’

Mervyn Benford, a former small-school head and information officer for the National Association of Small Schools, said yesterday the Church’s policy ‘wills the death of the village school’.

He accused the CofE of trying to ‘twist the arm of the Department for Education’, adding: ‘They’re trying to put an edge into DfE guidance that will make it easier to close small schools.

‘Whether we have village schools left in five or ten years’ time is very doubtful.’

The DfE said there are no plans to change policy.

Mr Genders said the Church was ‘the most committed provider of rural schools’ and denied wanting to make closures easier.

‘All we are saying is that school organisation processes should be driven primarily by the educational interests of the children,’ he said.