HONG KONG (Reuters) – Police and protesters clashed at Hong Kong’s international airport on Tuesday evening after flights were disrupted for a second day and the political crisis in the former British colony deepened.

In a second day of unrest at the airport, thousands of black-clad protesters jammed the terminal, chanting, singing and waving banners.

Scuffles broke out after an injured person was taken out of the main terminal by medics after he was held by a group of protesters. Some activists claimed he was an undercover mainland Chinese police officer.

Several police vehicles were blocked by protesters and riot police moved in, pushing some protesters back and using pepper spray. A policeman pulled out a gun at one point.

Protesters also barricaded some passageways in the airport with luggage trolleys, metal barriers and other objects. At least two protesters were taken away by police.

The situation calmed down after a few hours without the violence worsening.

The action at the airport followed an unprecedented airport shutdown on Monday. Hong Kong’s Airport Authority said operations had been “seriously disrupted” on Tuesday and departing passengers had been unable to reach immigration counters.

The weeks of protests began as opposition to a now-suspended bill that would have allowed suspects to be extradited to mainland China and have swelled into wider calls for democracy.

Demonstrators say they are fighting the erosion of the “one country, two systems” arrangement that enshrined some autonomy for Hong Kong since China took it back from Britain in 1997.

Ten weeks of increasingly violent clashes between police and protesters have roiled the Asian financial hub. Hong Kong’s stockmarket fell to a seven-month low on Tuesday.

Chief Executive Carrie Lam made an appeal for calm and restraint.

“Take a minute to look at our city, our home,” she said,

her voice cracking, at a news conference in the newly-fortified government headquarters complex.

“Can we bear to push it into the abyss and see it smashed to pieces?” she said. 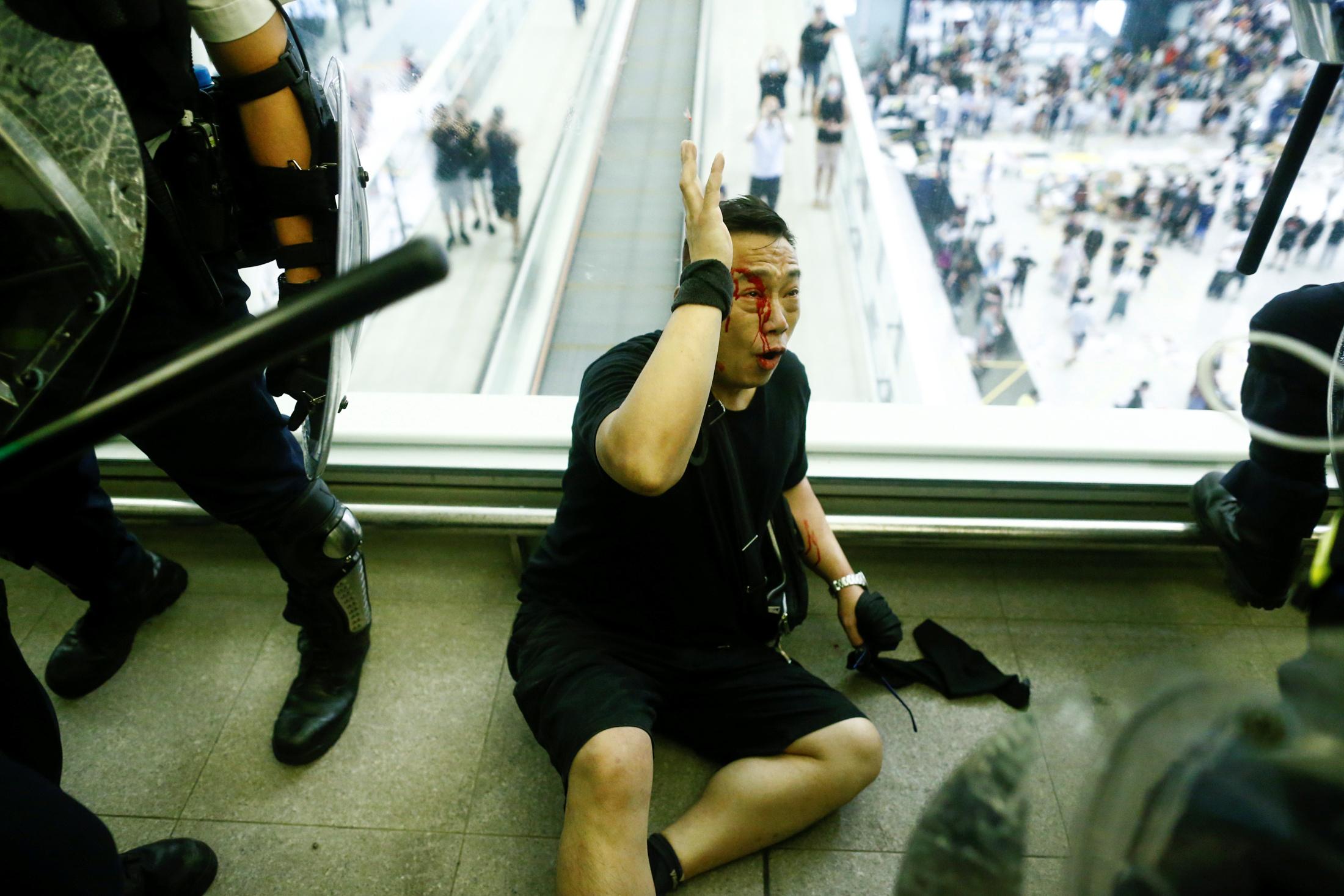 As she spoke, the benchmark Hang Seng index .HSI hit a seven-month low, shedding more than 2% and dragging down markets across Asia.

Demonstrators want Lam to resign. She says she will stay.

The events present Chinese President Xi Jinping with one of his biggest challenges since he came to power in 2012.

Hong Kong legal experts say Beijing might be paving the way to use anti-terrorism laws to try to quell the demonstrations. On Monday,

“I think paralyzing the airport will be effective in forcing Carrie Lam to respond to us…it can further pressure Hong Kong’s economy,” said Dorothy Cheng, a 17-year-old protester.

As evening fell, protesters at the airport surrounded a man who they suspected to be a Chinese policeman. After an extended standoff when the man’s mainland Chinese identity card was taken and checked, medics and Hong Kong police entered the airport to take the man away, sparking the clashes.

Despite the trouble, some flights were still scheduled to take off early on Wednesday morning with some tourists still waiting in the departure hall and dining areas, according to Reuters journalists in the airport.

Some passengers challenged protesters over the delays as tempers began to fray. 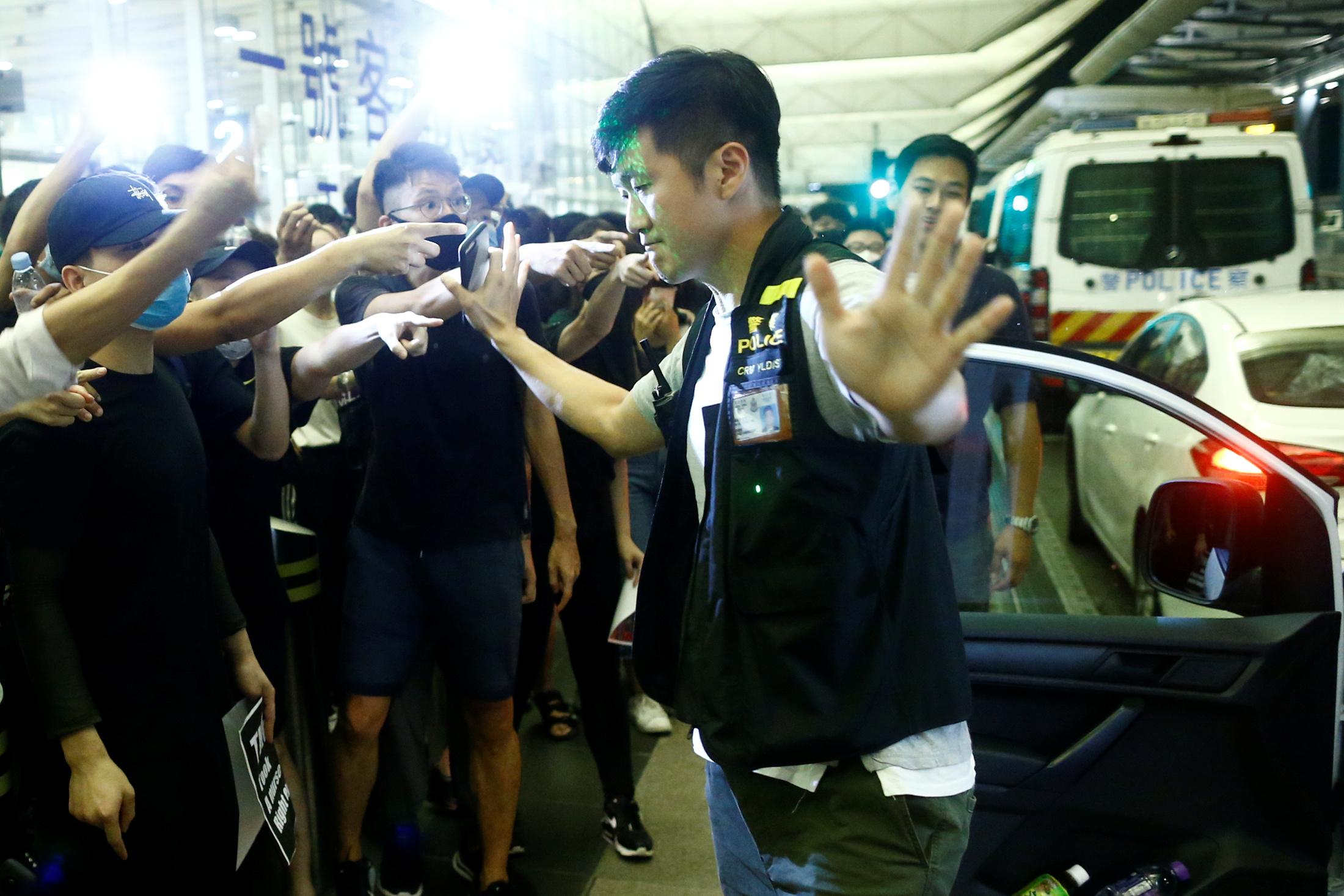 Flag carrier Cathay Pacific said flights might still be canceled at short notice. The airline, whose British heritage makes it a symbol of Hong Kong’s colonial past, is also in a political bind.

China’s civil aviation regulator demanded that the airline suspend staff who joined or backed the protests from flights in its airspace, pushing the carrier’s shares past Monday’s 10-year low.

Other Chinese airlines have offered passengers wanting to avoid Hong Kong a free switch to nearby destinations, such as Guangzhou, Macau, Shenzhen or Zhuhai, with the disruption sending shares in Shenzhen Airport Co Ltd (000089.SZ) surging.