In the early months of the Trump administration, automakers pleaded for — and appeared set to receive — some relief from fuel economy standards that they said were too difficult to meet.

But newly released government emails show how a coalition of groups that reject established climate science quickly muscled into the picture, urging the administration to go much further and roll back the rules entirely and characterizing the automakers as their opponents in achieving that goal.

“The automakers are not going to help and may be part of the opposition,” wrote Myron Ebell, a senior figure at the Competitive Enterprise Institute, a free-market think tank in Washington that disputes that climate change is a problem, in a May 2018 email sent to supporters and an official at the Environmental Protection Agency.

The administration must stick with the rollback, he said in the email, addressed to members of the “Cooler Heads Coalition,” a loose-knit group of climate denialists that Mr. Ebell leads.

Automakers have in fact balked at the Trump administration’s plan, which in its most extreme scenario proposes to substantially weaken Obama-era standards that would have doubled the fuel economy requirement of new cars by 2025.

Last month, 17 automakers asked Mr. Trump to soften his approach, saying his plan threatened to hurt their profits and produce “untenable” instability given that California and 13 other states, as well as Canada, are expected to stick with the stricter standards — raising the specter of a national auto market split in two, and a nasty legal battle.

At a congressional panel last week, administration officials gave no sign of easing their stance.

“In my experience, these rules tend to go to the courts regardless,” said Heidi King, the deputy administrator for the National Highway Traffic Safety Administration, which is crafting the new standards with the E.P.A. and has taken the lead on the rule-making.

The correspondence, released by the Environmental Protection Agency to the Sierra Club under a public records request, underscores the rising influence of climate denialist groups, which jumped from the fringe to the mainstream in the Trump administration and now hold sway in federal policymaking. Mr. Ebell of the C.E.I. think tank, which challenges “global warming alarmism” and spearheaded the opposition to the Paris Agreement, was chosen to lead Mr. Trump’s environmental transition team. 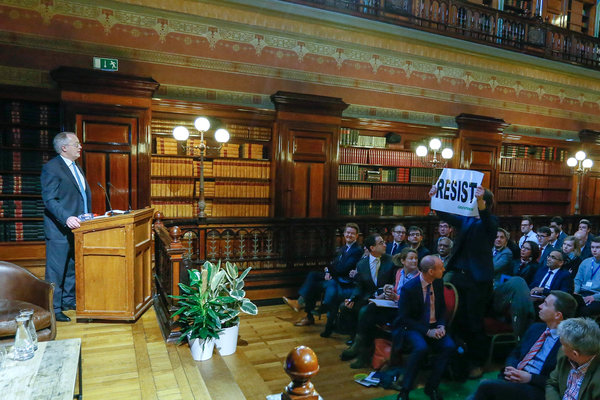 The rules being rolled back were a signature part of the Obama administration’s plan to fight climate change. The atmosphere is warming because of greenhouse gas emissions linked to human activity, and climate change is already contributing to extreme weather globally, including stronger storms, more extensive flooding and heat waves.

Assuming the Trump administration’s plan is finalized and survives legal challenges, America’s cars and trucks would emit as much as an extra 321 million to 931 million metric tons of carbon dioxide into the atmosphere between now and 2035 as a result of the weaker rules, according to an analysis by the research firm Rhodium Group.

In 2018, Mr. Ebell’s group weighed in at a critical juncture in the policymaking process — one day before auto executives were scheduled to visit the White House to urge Mr. Trump to temper his rollback. “We understand that some in the automaker community have expressed concerns about your current plans to reform the program,” Mr. Ebell wrote in a May 10, 2018, letter to Mr. Trump, signed by him along with two other people who assisted with the transition.

“Their main concern is the expected legal battle with California,” they wrote. “In fact, what many liberal California politicians really want to do is ban gasoline-powered cars altogether.” Their letter went on to say: “You should dismiss this concern. We agree that in an ideal world, California would negotiate with you in good faith, but we all know that is not a reality in this current political climate.”

In an interview, Mr. Ebell said his group had succeeded in influencing the rule-making, in particular convincing the Trump administration that forcing automakers to build cleaner cars will lead to more highway accidents and deaths. Auto experts have largely debunked that assertion.

“It’s taken a long time but finally the Trump administration has come around. Lighter, smaller cars are less safe than bigger, heavier cars,” he said. “The automakers are in a hopeless position,” he added. “California is not going to negotiate. A deal that everyone can live with is not going to happen.”

The Auto Alliance, which represents some of the country’s largest automakers, declined to comment.

The newly released government correspondence also hints at the influence of fossil fuel money in the policymaking process. The New York Times reported in December that Marathon Petroleum, the country’s largest refiner, worked with a powerful fuel-industry group, American Fuel and Petrochemical Manufacturers, to run a stealth campaign to roll back car emissions standards.

Mr. Ebell’s C.E.I. and other groups have previously received funding from the fuel-manufacturers’ organization, though as a nonprofit, the C.E.I. is not required under law to disclose its donors, making it difficult to verify current funding.

Last month, Congress opened an investigation into petroleum companies’ involvement in the rollback.

The latest emails also show Trump administration officials in contact with other free market groups like the Heritage Foundation and FreedomWorks, both of which have supported the rollback, as well as the American Legislative Exchange Council, an organization run by mostly Republican state legislators and corporations that work together to write and promote model legislation for the nation’s statehouses.

In one email, in June 2018, an ALEC staffer wrote to Michael Abboud, the E.P.A. press secretary, to introduce him to the head of ALEC’s task force on energy, environment and agriculture, Grant Kidwell. Mr. Kidwell “would love the connection to the EPA,” the staffer wrote.

“Thanks for the introduction!,” Mr. Abboud responded. “I would love to get together for coffee and chat?” ALEC, which has said it welcomes debate among its members on climate change and has promoted policies that would lead to more emissions, later adopted a model resolution that “fully supports” a rethinking of the fuel economy standards.

Mr. Kidwell said he and Mr. Abboud did not interact until they ran into each other at a networking event this year. ALEC opposed the Obama-era fuel economy standards, Mr. Kidwell said, because “Americans should be able to buy vehicles they prefer.”

Mr. Abboud declined to comment specifically on the email. The “E.P.A. takes time to meet with stakeholders on a variety of regulatory issues,” he said in an agency statement. “This is no different.”

The denialists’ outreach to the administration has taken other forms. American Commitment, another conservative group, helped generate almost 1,600 public comments in support of the rollback, or 13 percent of the 12,000 comments received and posted by the National Highway Traffic Safety Administration.

Many of the comments shared common language. “I believe the Obama/California scheme was designed with the ultimate goal of banning the internal combustion engine,” they said in part. “I fully support President Trump’s plan to freeze the fuel economy mandate and stop Sacramento liberals from telling me what kind of car I can drive.”

Public comments like these are important because federal rules require their collection, and if a final rule is ever challenged in court (as California has threatened to do) the public comments become part of the body of evidence for a legal case showing public sentiment.

Phil Kerpen, American Commitment’s president, said that his staff had worked with the federal agency to make a “large bulk submission” of comments solicited from the group’s supporters. “We can’t count on the automakers to carry this fight,” Mr. Kerpen said.

Some fossil fuel companies have distanced themselves from these efforts.

In a letter sent in June by the oil giant BP to Andrew Wheeler, the E.P.A. administrator, the company sided with automakers (referring to them by the acronym for original-equipment manufacturers) in urging Mr. Wheeler to keep working to improve fuel economy, according to the letter, a copy of which was reviewed by The New York Times.

“We believe — along with many of the auto OEMs — that continuous improvement” in engine efficiency is possible, it said. BP declined to comment.

Hiroko Tabuchi is a climate reporter. She joined The Times in 2008, and was part of the team awarded the 2013 Pulitzer Prize for Explanatory Reporting. She previously wrote about Japanese economics, business and technology from Tokyo. @HirokoTabuchi • Facebook