More than 200 demonstrations took place across the UK as workers were actively encouraged to join protesting students. 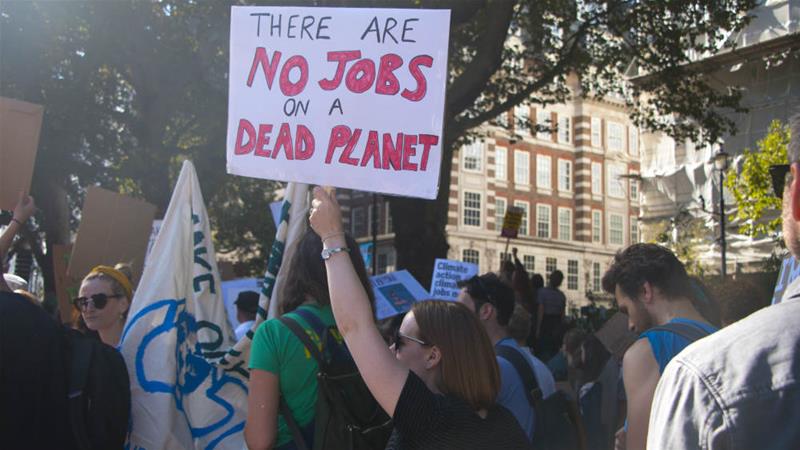 London, England – An estimated 100,000 people turned up on the streets of the British capital on Friday as part of what is expected to be the largest mobilisation in a worldwide series of climate-focused events, organisers said.

According to the UK Student Climate Network (UKSCN), which is coordinating the strikes in this country, more than 200 demonstrations took place across the UK on Friday as workers were actively encouraged to join the youngsters.

Some companies closed up shop for the day and trade union groups such as the TUC and Unite supported the strike.

In London, high-pitched children’s voices led chants demanding “climate justice” as protesters began pouring onto Millbank by the Houses of Parliament, carrying placards bearing slogans such as “there is no planet B” and “our house is on fire” – a rallying cry echoing the words of 15-year-old campaigner Greta Thunberg during an impassioned speech at the European Parliament in April.

The Swedish student has inspired a global movement after she began skipping school on Fridays to demonstrate in front of the Swedish parliament, asking her government to take climate change seriously.

“I felt like climate change is so important, but I hadn’t really seen anything to reflect that,” Lola Fayokun, an 18-year-old member of the UKSCN from Avery in south London, told Al Jazeera at the protest.

“It’s already killing people and having so many horrific impacts, especially in the Global South. Yet nothing is being said. There is complete radio silence on the issue,” she added.

The students, most of whom are below voting age, are asking the government to bring the voting age down to 16 as well as for a reform of the national curriculum to reflect the importance of the ecological crisis.

By early afternoon, tens of thousands of people, from mothers with babies to retirees, had poured into the streets around Parliament and spilled out into a nearby park, as well-known activists, journalists and politicians including Labour leader Jeremy Corbyn took to the stage to talk about how to achieve a just transition to a green economy. 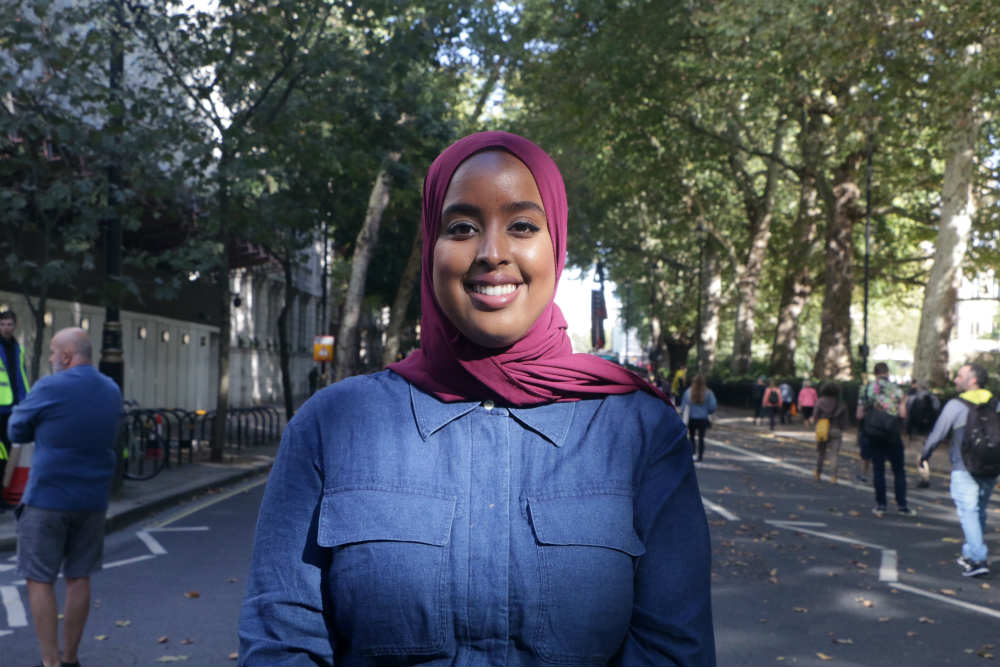 “It’s the first time I’ve been involved in a climate protest where there are people that look like me. The reason is that strikers aren’t just calling for climate action, they’re calling for action against economic inequality, which is recognising that people of colour and working-class communities are facing the brunt of climate change.”

In advance of the demonstration, Labour and the Green Party announced plans for a cross-party bill aimed at bringing forward the deadline for achieving net-zero carbon emissions to 2030.

Climate campaigners have long argued that former prime minister Theresa May’s 2050 deadline, welcome as it was, could be too little too late.

While millions of people around the world today are putting forward similar demands for a coordinated action plan to transition away from fossil fuels – a “green new deal” – Ibrahim believes it falls on the UK, one of the countries that spearheaded heavy industrialisation and as such one of the most responsible for carbon emissions, to lead the way.

“It will take mass action, it will take world leaders to come together, but the UK has a responsibility to act because of its colonial history,” Ibrahim told Al Jazeera.

“Part of the global economy is a British economy that they outsourced to the rest of the world. So there is a responsibility for the UK to act even faster than other governments.”

The mobilisation comes before the UN Climate Action Summit taking place in New York on September 23, the most important annual gathering of world leaders to discuss policy aimed at countering climate change in light of the latest data and research.

Earlier this year, UN scientists said global carbon emissions should be halved by 2030 to avoid serious impact from climate change.

However, emissions are rising and four years after world leaders signed the Paris agreement, campaigners say little has been done to achieve its goal of keeping rising temperatures to below 2C above pre-industrial levels, while pursuing efforts to limit it to 1.5C.