Berlin: Three people have died and one person was injured after an avalanche hit Britain's highest mountain, the Ben Nevis in Scotland.

Police said three climbers died and one was injured on Tuesday, with the injured climber flown to a Glasgow hospital. The identities and nationalities of the victims were not known. 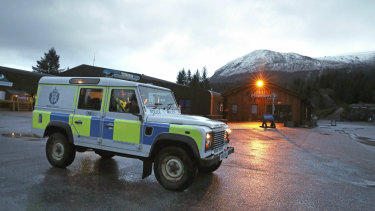 A police vehicle near the scene at the Nevis Range Mountain Resort with Ben Nevis in the background, in Scotland.Credit:PA

Emergency workers were called to the mountain's summit shortly after the avalanche to search for the group.

Rescue helicopters and ambulances were also dispatched to the area where Scottish police were coordinating an operation that involved local volunteer rescue workers.

The Ben Nevis is a popular destination, with more than 100,000 people visiting the peak each year, according to the Visit Scotland website.