This is the moment a cocky cyclist riding with his hands behind his head crashed into a parked scooter and then fled, leaving the damaged motorbike lying in the road.

Dash camera footage shows a cyclist in Bromley, London, riding his bike with his hands on the back of his helmet.

The cyclist, who isn’t holding the handlebars, appears to be blown by the breeze and is sent somersaulting over a parked motorbike.

The man, wearing black Lycra, flies past the slowing cars and suddenly careers to the left in the direction of parked vehicles. 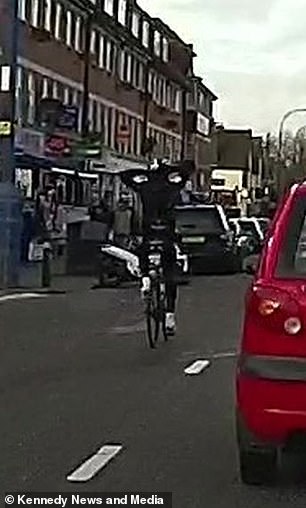 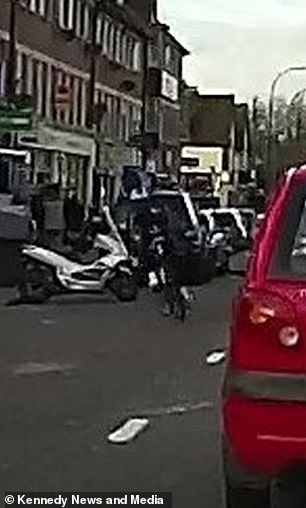 Dash camera footage shows a cyclist in Bromley, London, riding his bike with his hands on the back of his helmet then being blown into a parked motorbike

As his front tyre collides with a parked motorbike, he is launched over his handlebars, and his bike wheels are sent into the air.

As cars beep their horns, the embarrassed cyclist flees the scene, not checking if he has damaged the motorbike – almost hitting a parked car on his way.

After checking on his own tyres but disregarding the vehicle he’d just hit, the rider rights his bike and starts his journey again.

The delivery driver emerges from a nearby KFC and looks like he is about to chase the cyclist as he watches him flee the scene.

He goes back and picks up his own vehicle before his mini-windscreen blows off and smashes on the tarmac and he drives off without it.

Luke Russell, 26, who captured the video on his car’s dashcam on January 11, was taking his mother Clare, 66, shopping when they witnessed the crash.

He said that the moment the cyclist crashed was one of the ‘funniest things’ he’d ever seen.

He said: ‘It was one of the funniest things I’ve ever seen. Even before it happened, I almost had a premonition that he was going to fall off. Just as I thought it, he went.

‘We got stuck in a little bit of traffic and I saw the bike come flying down the hill behind me. He couldn’t have looked more relaxed.’

Mr Russell added: ‘He had his hands on the back of his head but then a little bit of wind meant he lost control and he just crashed straight into this delivery guy’s motorbike. 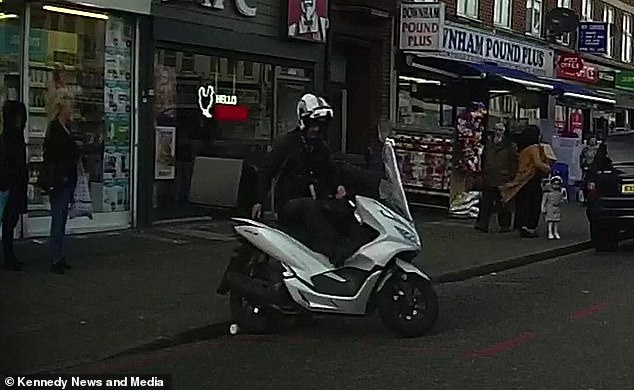 ‘His whole bike flew into the air. I can’t imagine he didn’t get some injuries from the impact but I think he was just so embarrassed he just wanted to leave straight away.

‘He stood up, picked up his bike, checked the wheels were alright and just got up and rode off. I didn’t see if the delivery driver managed to catch up with him.’

After Luke, uploaded the video to TikTok, some people were quick to say it was ‘karma’ for the way the cyclist had been riding.

One user said: ‘When you get over confident and end up like this. Hopefully learning a lesson. Look at me not stuck in traffic…’

Another added: ‘We cyclists don’t claim him.’