Colombia’s former President Alvaro Uribe was placed under house arrest Tuesday by the Supreme Court as he continues to be investigated for fraud and witness tampering.

The court reached a unanimous decision after finding there was potential for obstruction of justice to take place, it said in a statement.

‘Senator Uribe will serve out his confinement in his residence, from where he can continue to mount his defense,’ the court said.

The investigation comes from accusations made by Senator Iván Cepeda, who alleges that Uribe was a founding member of a paramilitary group in his home province during the decades-long civil conflict involving government forces, leftist rebels and right-wing bands that left hundreds of thousands dead, displaced or missing. 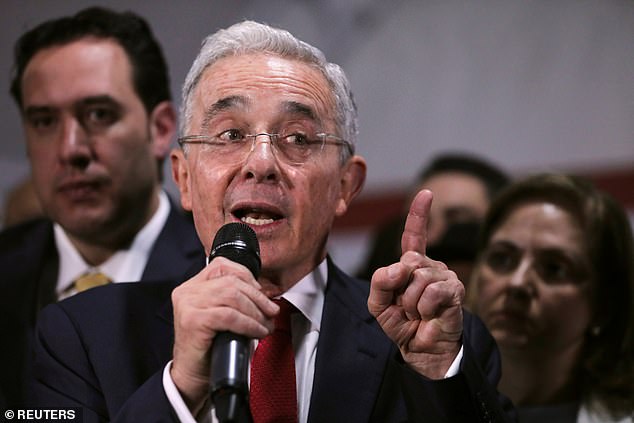 Alvaro Uribe, who was president of Colombia from 2002 to 2010, was placed under house arrest Tuesday by the Supreme Court. Uribe is being investigated for fraud and witness tampering after an accusation was brought forward alleging the former leader was a founding member of a paramilitary group 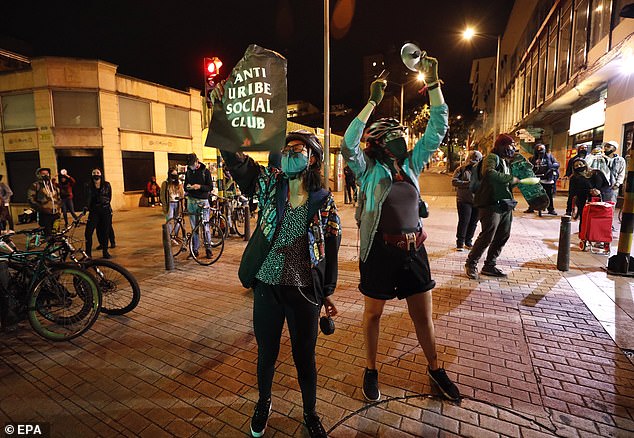 People who support the house arrest of Senator Alvaro Uribe gather in a street in Bogota, Colombia, after the Supreme Court announced its unanimous decision as part of an investigation surrounding fraud and witness tampering by the former president 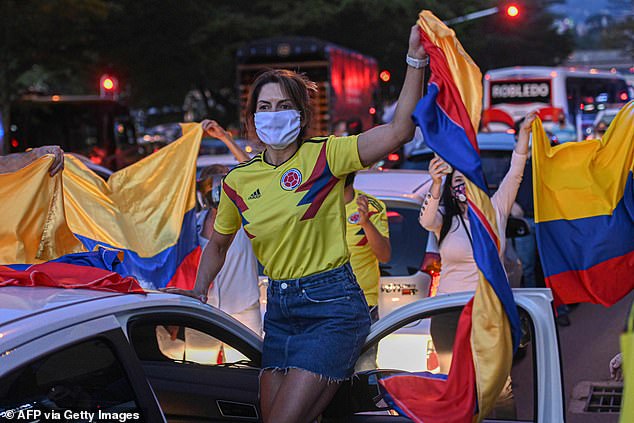 Uribe, a mentor of President Ivan Duque who now serves as a senator, has repeatedly declared his innocence in the case and questioned the high court’s independence.

‘The deprivation of my freedom causes me a profound sadness for my wife, for my family and for the Colombians who still believe that I have done something good for the homeland,’ the 68-year-old wrote on Twitter.

It is the first time ever that a former president in Colombia has been ordered detained.

A celebration of the court’s decision took place in Bogota and other cities Tuesday evening. Supporters of Uribe protested the Supreme Court’s decision, which was denounced by Duque. 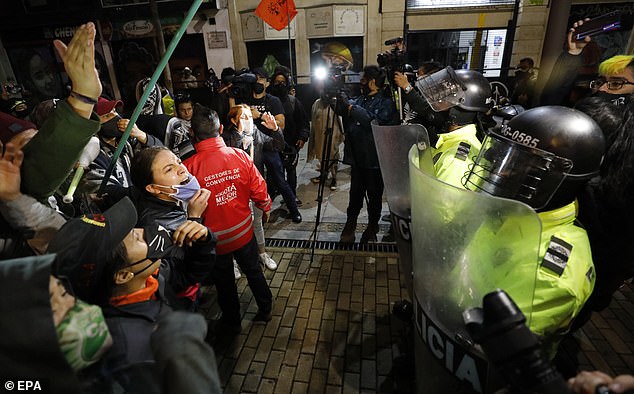 Supporters of former President Alvaro Uribe confront the police in Bogota, Colombia, after the Supreme Court announced its decision to place Uribe under house arrest 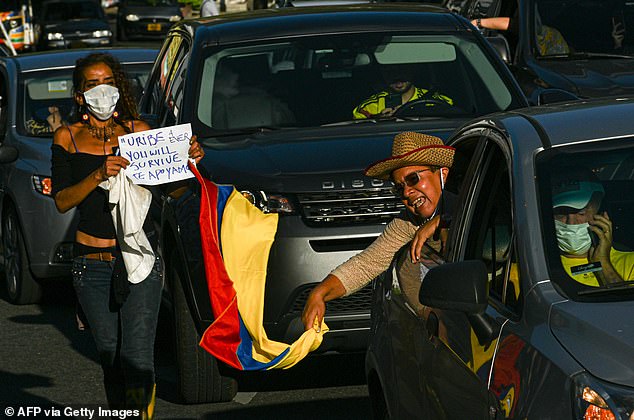 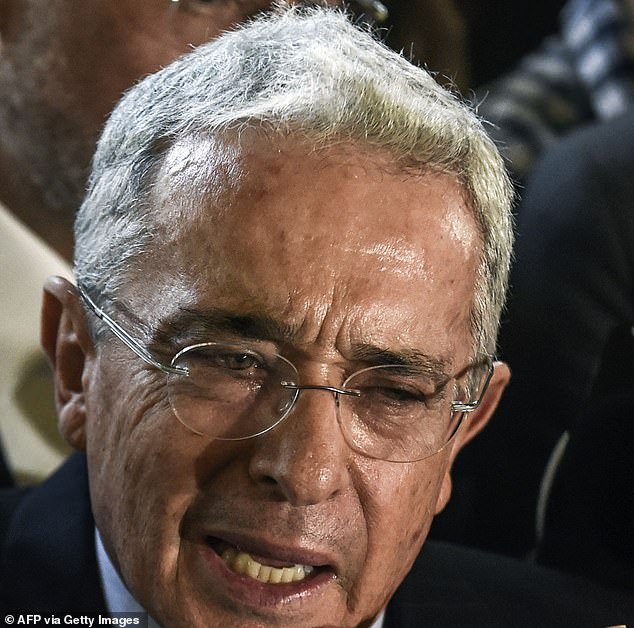 Colombia’s former President Alvaro Uribe, a mentor of President Ivan Duque, has repeatedly declared his innocence in the case and questioned the high court’s independence as he is being investigated for fraud and witness tampering after he was was accused of allegedly being a founding member of a paramilitary group

‘I have always considered him and will considered him a genuine patriot, dedicated to serving Colombia,” Duque said in a video statement. ‘Alvaro Uribe confronted drug trafficking, terrorism, and the totalitarian regimes of Latin America.

‘It hurts, as a Colombian, that many who have wounded the country with barbarities defend themselves in freedom … that an exemplary public servant who has held the highest position of the state cannot defend himself in freedom with the presumption of innocence.’

According to local media, Uribe is at his country house in the northern province of Cordoba, off Colombia’s Caribbean coast. 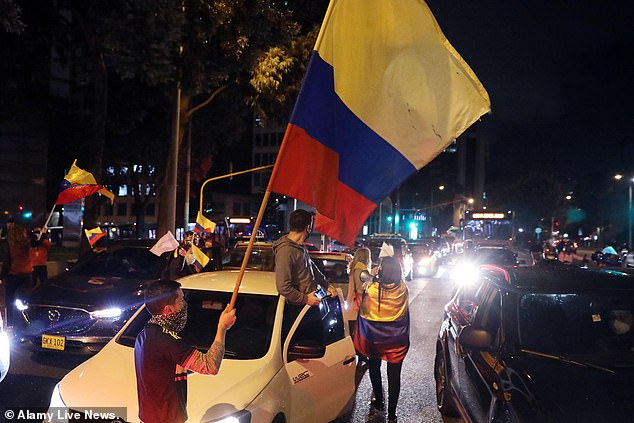 Supporters of the former Colombian President and current senator Alvaro Uribe Velez shout slogans and wave the national flag while protesting against the senator’s arrest warrant in the streets of Bogota, Colombia Uribe served as president from 2002 to 2010, overseeing the country at a time of continuing conflict with the former Revolutionary Armed Forces of Colombia [FARC].

His political legacy remains highly polarizing, with some Colombians crediting him for weakening leftist rebels and turning the tide in the country’s long civil conflict, and others decrying his iron-fisted approach.

Some of the Andean nation’s most grave human rights abuses took place during his mandate.

Throughout his career, Uribe has been dogged by allegations of ties to drug cartels and paramilitaries. The civil aviation agency he led in the early 1980s was accused of giving air licenses to drug traffickers. Declassified State Department cables from a decade earlier show U.S. officials were told the up-and-coming politician had ties to cartels.

In 2012, Uribe accused Cepeda of orchestrating a plot to tie him to right-wing paramilitary groups.

But in 2018 the court said Cepeda had collected information from former fighters as part of his work and had not paid or pressured former paramilitaries.

Instead it was Uribe who was at fault, the court said, adding that his allies had undertaken new witness tampering efforts even after its original ruling.

Uribe and lawmaker Alvaro Hernán Prada face prison terms of up to 12 years. That would put Uribe in the ranks of other former Latin American presidents, including Brazil’s Lula da Silva and Peru’s Alberto Fujimori, who have served time in confinement.

‘There is no one in Colombia who is above justice or the law, no matter how influential they are,’ Cepeda said in a virtual news conference.

Uribe is best known for mounting an aggressive offensive against Marxist guerrillas during his 2002 to 2010 tenure. He and his family have long been accused of paramilitary links. His brother Santiago is facing a murder charge.

Uribe’s detention may weaken the cohesion of the Democratic Center in Congress as Duque ties to pass reforms meant to help manage the fallout of coronavirus.

Right-wing paramilitary groups, formed in the 1980s to fight leftist rebels, were financed by drug traffickers, ranchers and landowners. The groups ruled through terror, committing massacres, rape and mass displacements.