Company director reports angry neighbour, 73, to police for RACISM saying he called him a ‘Scottish c***’ after hurling a rock at him in long-running feud

The raging pensioner who tried to hurl a 60lb rock at a father-of-three is being investigated by police for alleged racism after calling his victim a Scottish c***, it was claimed.

Christopher Woodward, 73, was caught on camera picking up the boulder and aiming it into the cab of the digger where his neighbour Alan McTear was sitting.

Father-of-three Mr McTear, 51, dodged the rock which could have caused serious injury if it had hit him. 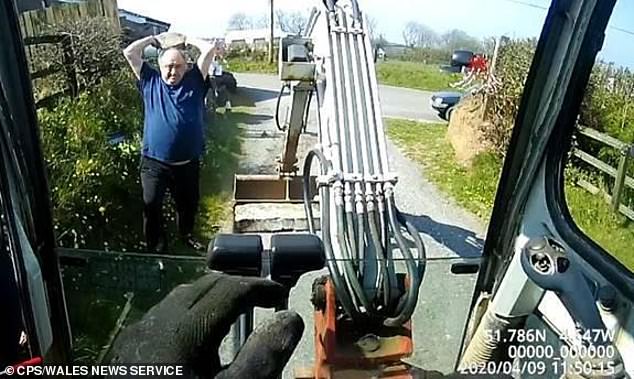 Alan McTear, 53, from Tavernspite in south-west Wales, was inside a mini-digger laying a new fence when he was confronted by 73-year-old neighbour Christopher Woodward, who hurled a large rock at him 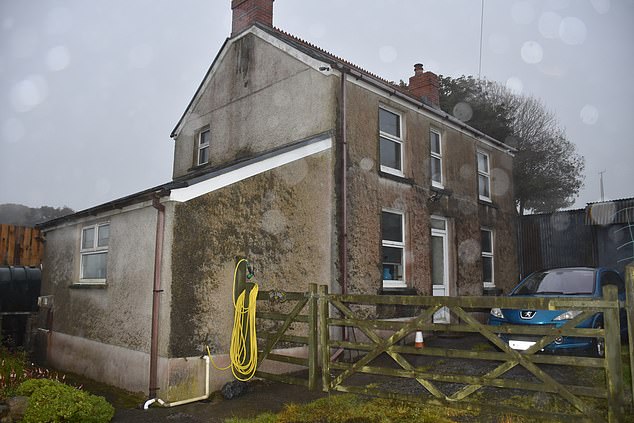 Neighbours Christopher Woodward and Alan McTear have installed CCTV cameras at their homes as a result of the dispute. (pictured Mr Woodward’s house) 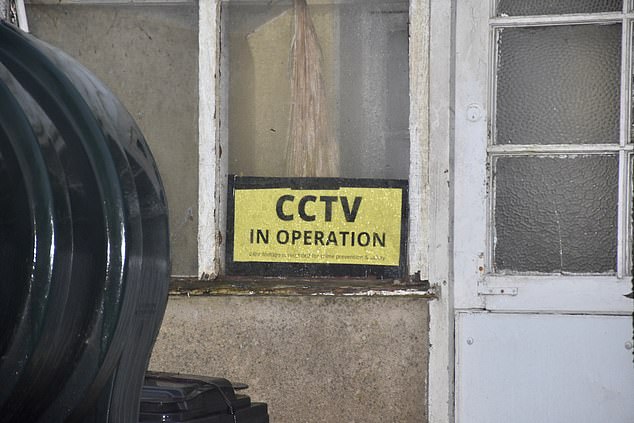 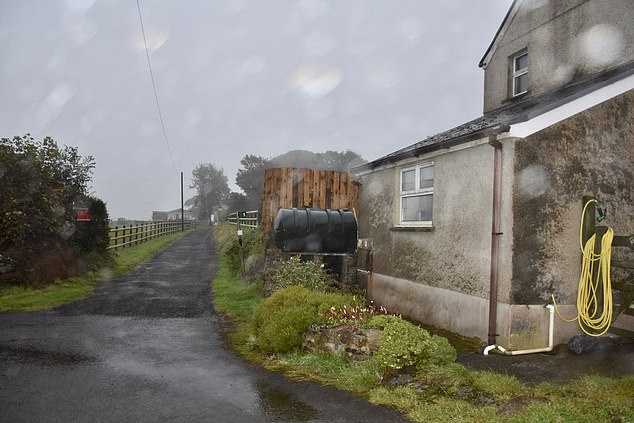 The two neighbours live on either end of this laneway in Tavernspite, Pembrokeshire

The bodycam he wears in the grounds of his £467,000 home recorded the horrific incident which led to Woodward being arrested and taken to court.

Mr McTear claims the bodycam also recorded his neighbour calling him a Scottish c*** in a separate incident.

The engineering consultant said: ‘I’ve got it on tape and it’s with the police and Crown Prosecution Service.

‘I can’t say much while the investigation is going on, but it was racial abuse.’

Mr McTear moved from Scotland to the village of Tavernspite, Pembrokeshire, three years ago and has been in a neighbourhood feud with Woodward ever since.

It spilled over when Woodward lost his temper when he saw Mr McTear in a mini-digger preparing land to put up a fence between their remote properties.

Magistrates at Haverfordwest heard Woodward threw the rock into the cab of the digger smashing the windscreen.

But Mr McTear, who didn’t attend the hearing, said there was no windscreen to protect him from the flying boulder which luckily missed him by inches.

He said: ‘If it had hit me it would have caused some damage, easily breaking a limb.

‘It was a very worrying thing to happen on my own land.’

The boulder belonged to Mr McTear – it was taken from a 100-year-old wall on his property by his neighbour in the incident on April 9.

The court gave Woodward a 12-month conditional discharge and ordered him to pay £317.74 in compensation, costs and a surcharge.

He was handed a 12-month restraining order banning him from contacting Mr McTear or going within 50 yards of his house.

But their properties are 500 yards apart and Mr McTear says the court made a mistake and the restraining order should have banned him for that distance.

Both men have video cameras trained on each other’s properties and have recorded hours of footage which has been viewed by police.

Mr McTear claims he has video of his neighbour approaching his property a week after the restraining order was imposed.

He said: ‘I’ve spoken to the police and have been told the court made a mistake – it should be 500 yards.’ 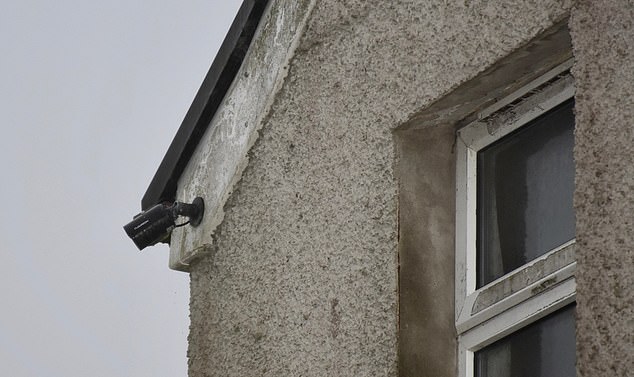 Mr McTear claims the ugly neighbourhood dispute has wiped a third off his property which has two holiday lodges for rent.

He claims the previous owners also had problems with Woodward but the court heard the pensioner had lived there peacefully for 15 years until the McTear family moved in.

Woodward said: ‘It’s been hell – he has video cameras and audio equipment recording us all day and night.

‘I admitted throwing the boulder at him but I was driven to it. There’s a lot more to this than what came out in court.’

It smashed the glass window of the mini-digger when their row over their garden fence reached boiling point.

The two men had been in dispute over a strip of land between their homes since Mr McTear moved into the countryside village of Tavernspite, Pembrokeshire from Scotland in 2018.

Magistrates were told Mr McTear believed the disputed land was his and sought to fence it off but Woodward, whose £201,000 house is just down the road from his neighbour, insisted it was a public footpath.

Woodward lost his temper when he saw a mini-digger in the area to prepare the land for fencing on April 9 this year.

Prosecutor Vaughan Pritchard-Jones, said Woodward went on a one-man protest to lay down in the digger bucket – but got out before it started to move. 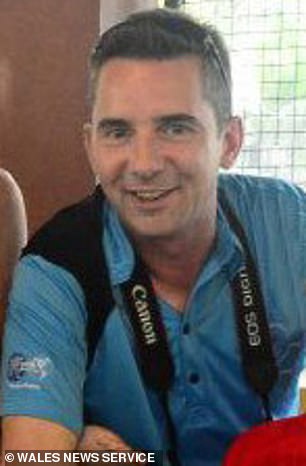 Mr McTear is the director of an engineering consultancy firm

He was then filmed on Mr McTear’s bodycam picking up a large rock and hurling it over his head towards the Tekeuchi digger.

Mr Pritchard-Jones said the rock smashed the windscreen and landed near the driver’s toes.

He added: ‘Clearly it was a dangerous act. The rock could have come through the screen and hit him. Fortunately he did not suffer any injury.’

Robin Shellard, defending, said Woodward had lived in peace at his home for 15 years, until Mr McTear and his family moved in to a detached property 300 yards away.

Mr Shellard said: ‘Mr Woodward had lived comfortably with neighbours for all those years, then found that the atmosphere had changed.’

Mr Shellard said: ‘April 9 was a culmination of a history of pressure on Mr Woodward.’

‘He snapped after a long culmination. He was constantly under supervision by five cameras, and subjected to verbal aggression whenever he went outside his home.’

‘Clearly it was not planned, it was a spontaneous act after a good deal of background.’

Magistrates imposed a 12-month conditional discharge and ordered Woodward to pay £317.74 in compensation, costs and a surcharge.

He was handed a 12 month restraining order banning him from contacting Mr McTear of going within 50 yards of his house. 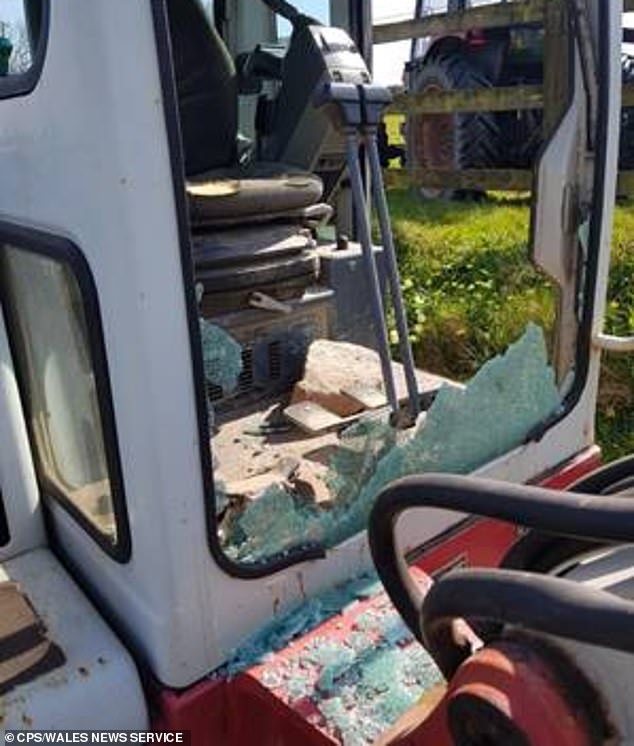