Washington: Barbara Lagoa, the Florida judge identified this week by US President Donald Trump as a contender to succeed Supreme Court Justice Ruth Bader Ginsburg, made a broad ethical promise last year when the Senate confirmed her to the federal bench. The 52-year-old wrote that a judge must recuse herself when her impartiality might reasonably be questioned and said she would step away from any case involving her past work as a judge.

Then came a case this year involving a referendum that Floridians approved to restore the voting rights of former felons and a law that the Republican-controlled legislature then passed setting a major limitation: only felons who don't owe money to the state can vote. 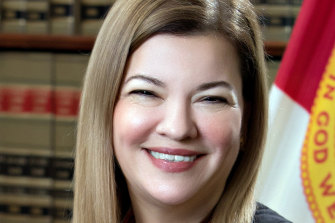 Barbara Lagoa, from Florida, is on Donald Trump’s shortlist for the US Supreme Court. Credit:Bruin79/Commons

The voting rights issue was one Lagoa had been vocal about while on Florida's high court, repeatedly challenging the arguments made by attorneys for former inmates, who could become a sizable voting pool in a state with a history of close presidential contests.

When the matter resurfaced before her on the US Court of Appeals for the 11th Circuit in Atlanta, Lagoa did not recuse herself.

Instead, she and another Trump appointee, who also had been a state judge in Florida, penned a 25-page order rejecting calls for their disqualifications, saying the federal case was distinct from the state one. We "carefully considered whether disqualification is legally required," Lagoa and Robert Luck wrote. "We've concluded that it is not." 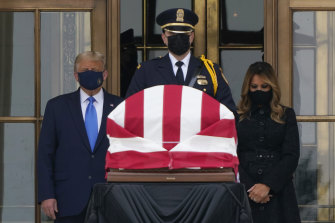 They became the deciding factor in a 6-to-4 ruling that overturned a lower-court finding that the payment provision amounted to an unconstitutional poll tax that discriminates against poor former prisoners.

The reversal is expected to keep many of the 85,000 felons who had registered to vote in the swing state from casting ballots in November. Trump won the state in 2016 by fewer than 113,000 votes.

The 11th Circuit decision has touched off a last-minute campaign by Democrats to see how many former inmates can pay off their court debts to cast ballots in November. Billionaire Mike Bloomberg, a former Democratic presidential candidate, announced this week he had raised $US16 million in donations, enough, he hopes, to cover the court debt of more than 30,000 former inmates by paying off the smallest debts first.

But the effort elicited cries from Republicans that Bloomberg's campaign would amount to paying people for votes, and on Wednesday, Florida's attorney-general announced she had sent letters to the FBI and Florida's Department of Law Enforcement requesting investigations on whether incentives are being offered for votes. 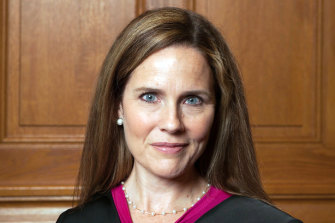 Amy Coney Barrett met with US President Donald Trump this week, ahead of his nomination for a judge to replace Ruth Bader Ginsburg in the Supreme Court.Credit:Rachel Malehorn/Commons

Trump, who continued his assault on mail-in balloting this week, left little doubt that he seeks to fill the Supreme Court vacancy in part to help him win reelection in the event the outcome winds up in the courts.

"With the unsolicited millions of ballots that they're sending, it's a scam, it's a hoax … so you're going to need nine justices up there. I think it's going to be very important," Trump told reporters outside the White House on Tuesday. Filling the seat before the election "would be a very good thing," Trump added, "because you're going to probably see it … They will be able to do something here because paper ballots are very simple, whether they counterfeit them, forge them, do whatever you want."

Trump has said he will announce his nominee from a shortlist of five women on Saturday at 5pm (Sunday AEST). He met this week with Amy Coney Barrett, 48, a favourite of evangelicals whose paramount concern is whether the next justice would vote to reverse the abortion rights decision of Roe v. Wade.

But several Republicans have urged Trump to pick Lagoa, saying the Miami-born daughter of Cuban exiles could solidify Trump's standing in the Latino community in Florida, potentially tipping a close race in his favour in the state with the third-most electoral college votes.

Our weekly newsletter will deliver expert analysis of the race to the White House from our US correspondent Matthew Knott. Sign up for the Herald‘s newsletter here, The Age‘s here, Brisbane Times‘ here and WAtoday‘s here.