Convicted terrorist Bilal Khazal will be subject to a highly restrictive control order for a year after the Federal Court found he posed an ongoing risk to public safety following his release from prison at the end of August.

Khazal, a former baggage handler, served a 12-year sentence for compiling a do-it-yourself terrorism manual that was published online.

Born in Lebanon, Khazal trained with extremists in Afghanistan and was a contact of Osama bin Laden. 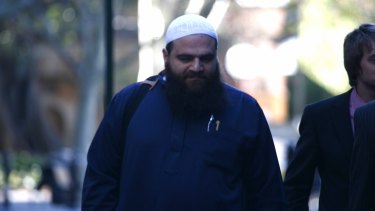 Convicted terrorist Bilal Khazal will be subject to extensive restrictions on his activities until August 2021. Credit:Nick Moir

Since his release from Goulburn Supermax, Khazal has been under an extensive interim control order requiring him to wear a tracking device and observe a 12am-6am curfew. Among the 19 conditions, he is also prevented from visiting Sydney Airport and other transport hubs, acquiring a vehicle weighing over 4.5 tonnes, and contacting people linked to terrorism activities.

The interim order was formally confirmed in a Federal Court hearing on Wednesday, with judge Michael Wigney finding it was a necessary and reasonable measure to protect the public from terrorism and prevent Khazal providing support to terrorism or hostile activities overseas.

While he has stated that he no longer holds extremist views and does not pose a risk to the community, Khazal did not oppose the confirmation of the control order on Wednesday. The order was confirmed with some minor technical variations and will now be in force until August 2021.

Control orders are used by police to monitor and restrict the activities of terrorists after their release from prison if they are still deemed to pose a risk to the community. There are currently nine in place across the country.

"The potential consequences if this risk materialises are very serious. This is particularly so having regard to the ability of lone offenders to carry out successful terrorist attacks and cause serious damage and loss of life without requiring significant knowledge, resources or sophisticated equipment," Commander Booth submitted. 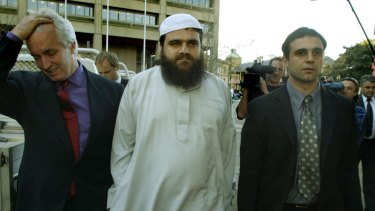 Khazal was convicted in 2008. Credit:Wade Laube

Her affidavit outlined evidence that Khazal had maintained an interest in extremist ideology while in prison.

A recent psychological assessment concluded Khazal to be at a low-to-medium risk of reoffending, although not finding he was at risk of committing a terrorist act himself.

Khazal, also known as Belal Khazaal, was convicted in 2008 in relation to his book, titled "Provisions on the Rules of Jihad: Short Judicial Rulings and Organizational Instructions for Fighters and Mujahideen Against Infidels". The book justified the killing of non-Muslims and provided advice on assassinating officials in Western countries, including Australia.

In a statement provided to the federal government last year, Khazal renounced his previous support for the teachings and activities of al-Qaeda and "all like organisations".

"I reject the contents of the book that led to my conviction and now fully appreciate the possible consequences and danger of its contents," he said.

Justice Wigney found the "emphatic and unequivocal renunciation" was a basis for a more optimistic outlook but the recent change in attitude had not been tested outside the confines of prison.