This is the incredible moment a cop catches a five-foot snake with his bare hands and yanks it out of the ceiling boards above a homeowner’s kitchen.

Officer Wang Xiaolong, with the Wainan Police Station in Xichang City in south-western China’s Sichuan Province, was called to the home earlier this week.

The homeowner, who has not been named, telephoned the police late in the evening after hearing sounds in his ceiling and discovering, to his shock, the 5 foot (1.5-metre) king ratsnake (Elaphe carinata) lurking in the cavity above his kitchen.

The ratsnake is not particularly dangerous to humans – it’s much more dangerous to other snakes – although it is noted for its strong and very unpleasant smell which may be why the homeowner was so keen to get rid of it. 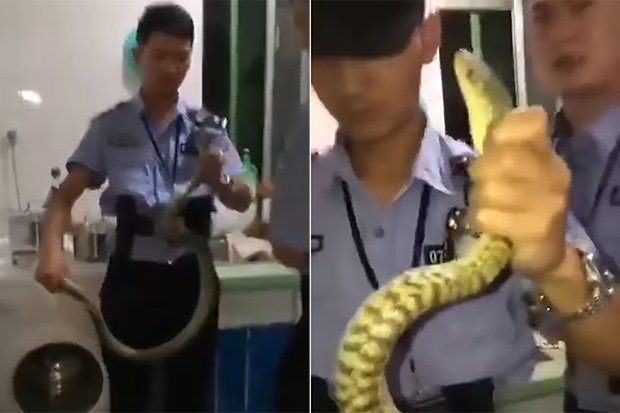 A police video shows Officer Wang standing on a stool in the kitchen and reaching into the ceiling boards without gloves or any other form of protective clothing.

The uniformed policeman grabs the snake at both ends, holding it by the tail and head, before revealing it with a flourish to his colleagues and the impressed homeowner.

Another policeman puts Wang’s cap back on his head as the fearless copper smiles for the camera.

According to the police, the ratsnake weighed roughly 2.2 lbs and was later released back into the wild. 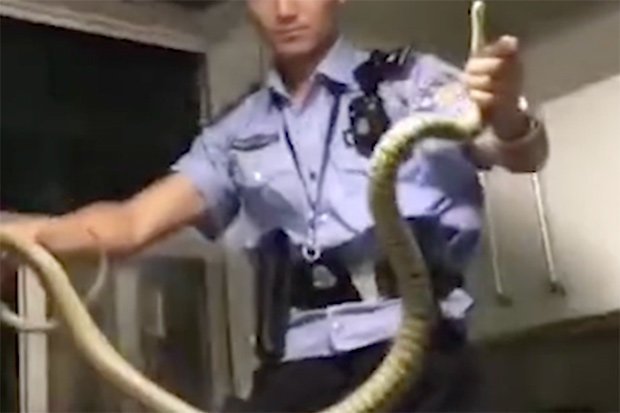