Jeremy Corbyn urges Labour MPs not to vote for Boris Johnson’s Brexit proposal, sparking fears he will remove the whip from those who disobey him

Jeremy Corbyn set out to wreck Boris Johnson’s Brexit proposals yesterday by encouraging Labour MPs not to vote for them.

The Labour leader told the Commons that the latest offer from the Prime Minister would be used as a ‘springboard’ to ‘attack rights and standards’ in the UK.

He said none of his party’s MPs could support the ‘reckless’ plan – leading some to conclude he might remove the whip from any rebel who backed it.

However, Labour sources said Mr Corbyn was not threatening such action. 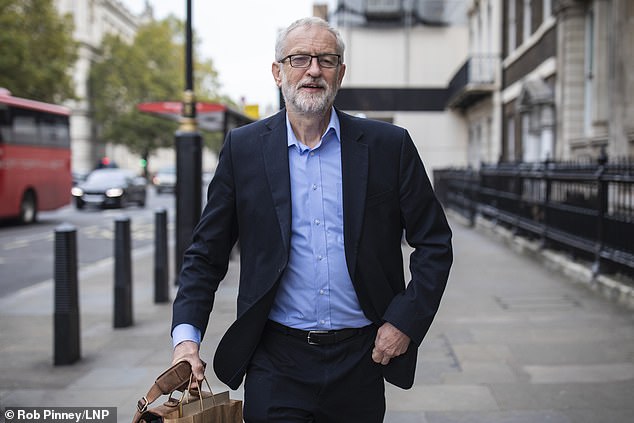 Labour leader told the Commons that the latest offer from the Prime Minister would be used as a ‘springboard’ to ‘attack rights and standards’ in the UK (pictured: Jeremy Corbyn in Westminster on Thursday)

In recent weeks, some Labour MPs have repeated their desire for a Brexit deal.

Backbencher Stephen Kinnock claims up to 30 Labour MPs will vote for any deal reached by Mr Johnson.

But Mr Corbyn said the PM’s plan amounted to a ‘rehashed version’ of previously rejected proposals that ‘put the Good Friday Agreement at risk and would trigger a race to the bottom on rights and protections for workers, consumers and our precious environment’.

He added: ‘This Government’s agenda is clear. They want a Trump-deal Brexit… that would crash our economy.’

Mr Johnson said: ‘I believe this is our chance and their chance to get a deal.’

He will need the support of a number of Labour MPs if he is to have any chance of getting his deal through the Commons.

Mr Kinnock has said: ‘If Dublin and Brussels are happy, then we’re happy.’ 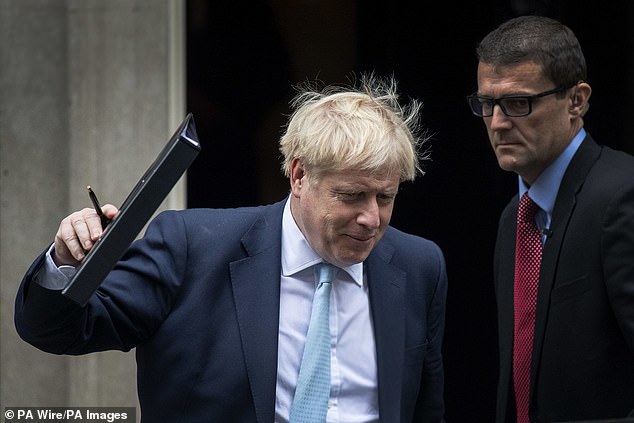 Labour colleagues such as Ruth Smeeth and Gareth Snell are said to be considering voting in favour. But party whips believe the total is more like ten or 12.

Many Labour MPs who would otherwise have been prepared to back a deal were put off by Mr Johnson’s controversial rhetoric in the Commons last week.

Yesterday, he employed a more emollient tone to garner support.