Don’t be lazy, you’re coming for a walk! Adorable video shows a Corgi in a fierce battle with its pooch pal who does NOT want to move from the floor

Two corgis were caught on camera putting an interesting spin on a classic tug of war match.

In the video, the two corgis hold opposite ends of a short length of red rope in their jaws.

The smaller of the two dogs can be seen walking backwards while struggling to jerk the rope out of the other corgi’s maw. 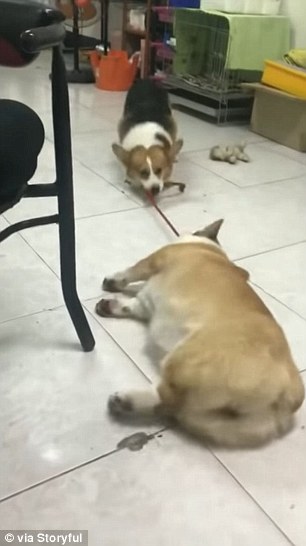 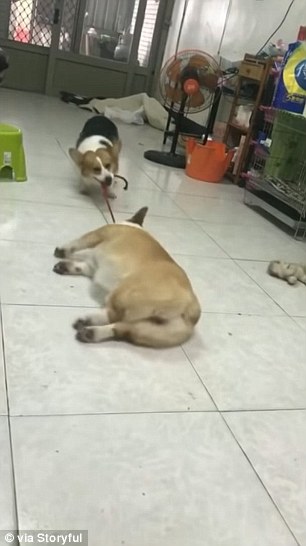 Two corgis hailing from China were caught on camera in the midst of a ferocious game of tug of war. The smaller of the two corgis can be seen dragging the other dog across the floor 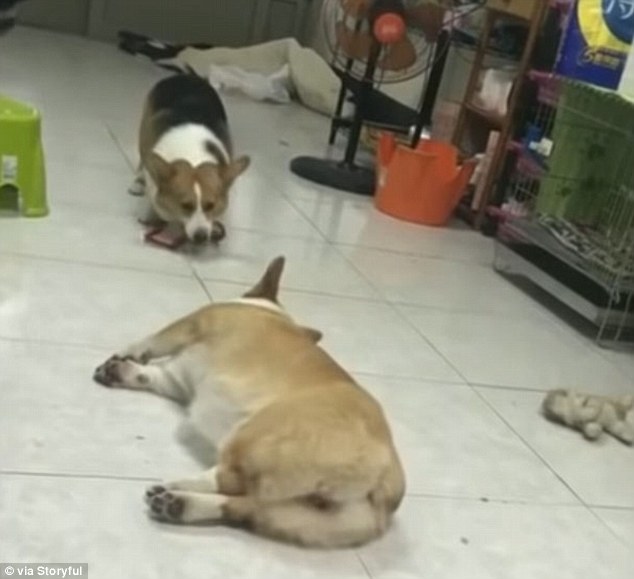 After much effort, the smaller corgi winds up victorious, with the red rope all to itself

The task proves harder than one would think, considering the small corgi is effectively dragging around a load of dead weight.

The bigger dog has clearly stumbled upon a successful new method of playing tug of war — limply laying prone on the ground.

The smaller corgi’s effort to win the battle results in it literally dragging the bigger corgi across the tile floor, like its some kind of warmblooded Swiffer that sheds fur instead of trapping it.

The entire between the dogs plays out in silence, with nary a growl or snarl to be heard. Instead, the dogs’ owners can be heard laughing in the background.

Eventually, the rope winds up wholly in the smaller dog’s mouth, although it’s unclear if it successfully yanked the rope away from the other dog or if the other dog just let go.

The two dogs are based in China. Their owner regularly updates a Facebook page, @corgidudu0228, with pictures and videos chronicling their shenanigans. The two dogs’ shenanigans are chronicled on the Facebook page, @corgidudu0228