There is a very good reason why the people of the Balearic Islands feel particularly hurt by Britain’s new rules on quarantine. As I flew into Mallorca, it was there beneath me.

The Mediterranean Sea shimmers beautifully under the sunlight, swirling around Mallorca and its beaches. This island lies around 124 miles (200km) from the Spanish mainland, and yet the same rules apply to tourists here as they would to those visiting Barcelona or Madrid.

On the face of it, that might sound sensible – one rule for the whole country. The British government has apparently decided that it is awkward and confusing to introduce regional exemptions, which could be circumnavigated by internal travel.

But, in reality, Mallorca is a long way from the rest of the country. The Canary Islands, situated off the coast of northwest Africa, are even more distant.

They are, in many practical ways, different countries united by the same flag.

The other reason why things feel noticeably different here is the utter reliance that the island has on tourism. Around a third of Mallorca’s gross domestic product is directly related to tourism.

Another third is linked to all the services, shops and supplies that feed into the tourism industry.

So that’s the great majority of Mallorca’s money, all linked to a tourism sector that has been battered by coronavirus but which was, slowly, coming back to life.

Occupancy rates in hotels had begun to rise; confidence was seeping back. 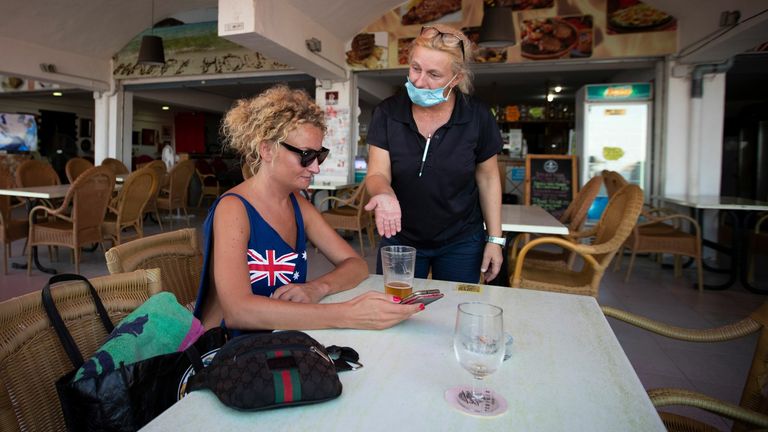 Little wonder, then, that announcements from Westminster have been received here with a combination of bemusement and anger.

The regional health minister, Patricia Gomez Picard, told me that she was worried and frustrated by the situation.

According to her statistics, the Balearic Islands were presently suffering between five and eight infections per 100,000 people – far, far lower than Catalonia or Aragon and, for that matter, also significantly lower than the UK average.

She, like Spanish Prime Minister Pedro Sanchez, thinks that the British government have made a mistake by not “following the science”.

Disquiet too among hoteliers. We talk to Maria Frontera, president of the Mallorca Hoteliers’ Federation, and an avowed optimist. Except now, even she is finding it hard to feel positive.

“We were hoping that these past two, nearly three months we were going to reactivate the tourism industry,” she tells me, sipping water as the temperature reaches 37C.

“We could have an opportunity to save part of it. Until yesterday, we had data showing that about 57% of hotels were open here in Mallorca but now we’re going to see how that decision of the British government is going to affect us.

“The hotels that only work with British holidaymakers won’t have any chance of being open so they’re probably going to have to close.”

She thinks some hotels will persevere but others may simply write off 2020 as a bad dream, close up and return in March, hoping that the new year brings a new start.

But she admits there may be some that close their doors now, and will never reopen. 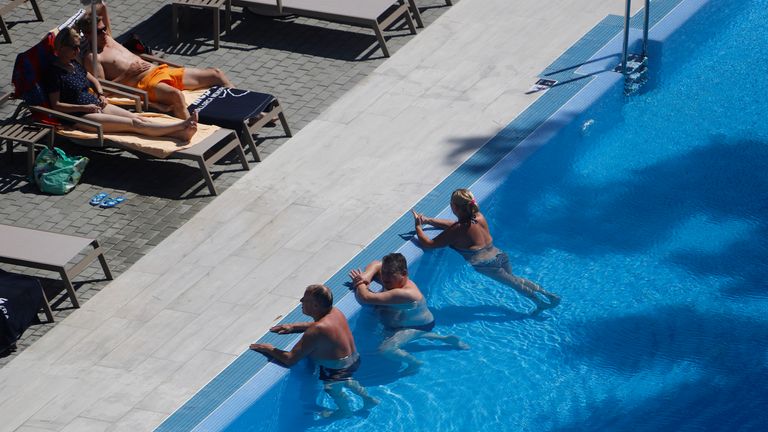 Mallorca does welcome tourists from other nations, of course. There are many Germans and, for the moment, their country has exempted the Balearics from any quarantine rules.

But there is nervousness here that Britain’s decision could be the first domino – that other nations might take fright, too, and issue a similar blanket ban against Spain and its islands, regardless of regional variations.

And the truth is that Spain’s latest COVID-19 outbreak is focused on the north east of the country.

Few argue that there isn’t a problem in Catalonia and Aragon, but the Spanish government maintains, with conviction, that it is unfair to tar the whole nation because of this one outbreak.

Can Mallorca recover? In time, yes of course. But not this year.

The question is not whether this year will be bad, because it is already catastrophically bad. It is about the extent of the chronic damage that will follow.

Mallorca is a tourist island with a shortage of tourists and that means less money for everyone who lives here, more businesses failing, higher unemployment and more social problems.

“The financial crisis of a decade ago was bad,” one official told me. “But this will turn out to be much worse.”