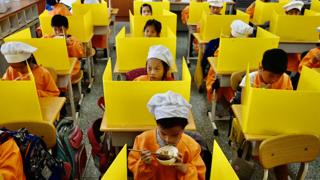 Coronavirus is continuing its spread across the world, with more than three million confirmed cases in 185 countries and some 200,000 deaths.

The United States alone has more than one million confirmed cases – four times as many as any other country.

This series of maps and charts tracks the global outbreak of the virus since it emerged in China in December last year.

The virus, which causes the respiratory infection Covid-19, was first detected in the city of Wuhan, China, in late 2019.

It is spreading rapidly in many countries and the number of deaths is still climbing.

Confirmed cases around the world

Please upgrade your browser to see the full interactive


Note: The map and table in this page uses a different source for figures for France from that used by Johns Hopkins University which results in a slightly lower overall total.

The US has by far the largest number of cases, with more than one million confirmed infections, according to figures collated by Johns Hopkins University. With nearly 60,000 fatalities, it also has the world’s highest death toll.

Italy, the UK, Spain and France – the worst-hit European countries – have all recorded more than 20,000 deaths.

In China, the official death toll is approaching 5,000 from about 84,000 confirmed cases. Numbers for deaths jumped on 17 April after what officials called “a statistical review” and critics have questioned whether the country’s official numbers can be trusted.

This information is regularly updated but may not reflect the latest totals for each country.

Note: The past data for new cases is a three day rolling average

The outbreak was declared a global pandemic by the World Health Organization (WHO) on 11 March. This is when an infectious disease is passing easily from person to person in many parts of the world at the same time.

More than three million people are known to have been infected worldwide, but the true figure is thought to be much higher as many of those with milder symptoms have not been tested and counted.

While the US and much of Europe has been hit hard by the virus, some countries have managed to avoid similar death tolls.

New Zealand, for instance, says it has effectively eliminated the threat for now after fewer than 1,500 cases and just 19 deaths.

The country brought in some of the toughest restrictions in the world on travel and activity early on in the pandemic but is now relaxing some of these. This week some non-essential businesses will be reopening but most people will still have to stay at home and avoid all social interactions.

While some countries are beginning to ease restrictions, others are only now starting to impose them as cases and deaths begin to rise.

Across Latin America, where many economies are already struggling and millions live on what they can earn day-to-day, there are concerns about the strain the growing number of virus cases could put on health care systems. Of particular concern are Ecuador and Brazil.

Ecuador has already seen its health system collapse – thousands have died from the virus and other conditions that could not be treated because of the crisis. While Brazil has also seen a steep rise in both cases and deaths, with every state in South America’s largest country affected.

Across the world, more than 4.5 billion people – half the world’s population – are estimated to be living under social distancing measures, according to the AFP news agency.

Those restrictions have had a big impact on the global economy, with the International Monetary Fund saying the world faces the worst recession since the Great Depression of the 1930s.

The UN World Food Programme has also warned that the pandemic could almost double the number of people suffering acute hunger.

The four worst-hit countries in Europe are Italy, the UK, Spain and France – all of which have recorded at least 20,000 deaths.

However, all four countries appear to have passed through the peak of the virus now and the number of reported cases and deaths is falling in each.

Italy and Spain, where the outbreaks began earlier, are now joining others around Europe in relaxing some of the restrictions that slowed the spread of the virus.

Spain has announced a four-phase plan to lift its lockdown and return to a “new normality” by the end of June. Children there under the age of 14 are now allowed to leave their homes for an hour a day, after six weeks in lockdown.

In Italy, certain shops and factories have been allowed to reopen and the prime minister says further measures will be eased from 4 May.

In the UK, where there have been more than 165,000 confirmed cases and at least 26,000 deaths, the government has said it will review its lockdown measures in early May.

In France, the prime minister said this week that non-essential shops and markets will open their doors again from 11 May, but not bars and restaurants. Schools will also be reopened gradually.

Other European countries easing restrictions include Austria, Denmark, Switzerland, the Czech Republic and Germany, where facemasks have become mandatory in public transport.

With more than one million cases, the US has the highest number of confirmed infections in the world. The country has also recorded about 60,000 deaths.

The state of New York has been particularly badly affected, with more nearly 18,000 deaths in New York City alone, but Governor Andrew Cuomo says the toll “seems to be on a gentle decline”.

Mr Cuomo has suggested some parts of his state could begin to reopen after the current stay-at-home order expires on 15 May.

At one point, more than 90% of the US population was under mandatory lockdown orders, but some states have begun to lift restrictions.

Georgia, Oklahoma, Alaska and South Carolina have all allowed some businesses to reopen in recent days following official unemployment figures that showed more than 26 million Americans have filed for jobless claims in the last five weeks.

But public health authorities have warned that increasing human interactions and economic activity could spark a fresh surge of infections just as the number of new cases is beginning to ease off.

White House coronavirus taskforce coordinator Dr Deborah Birx has said social distancing should remain the norm “through the summer to really ensure that we protect one another as we move through these phases”.